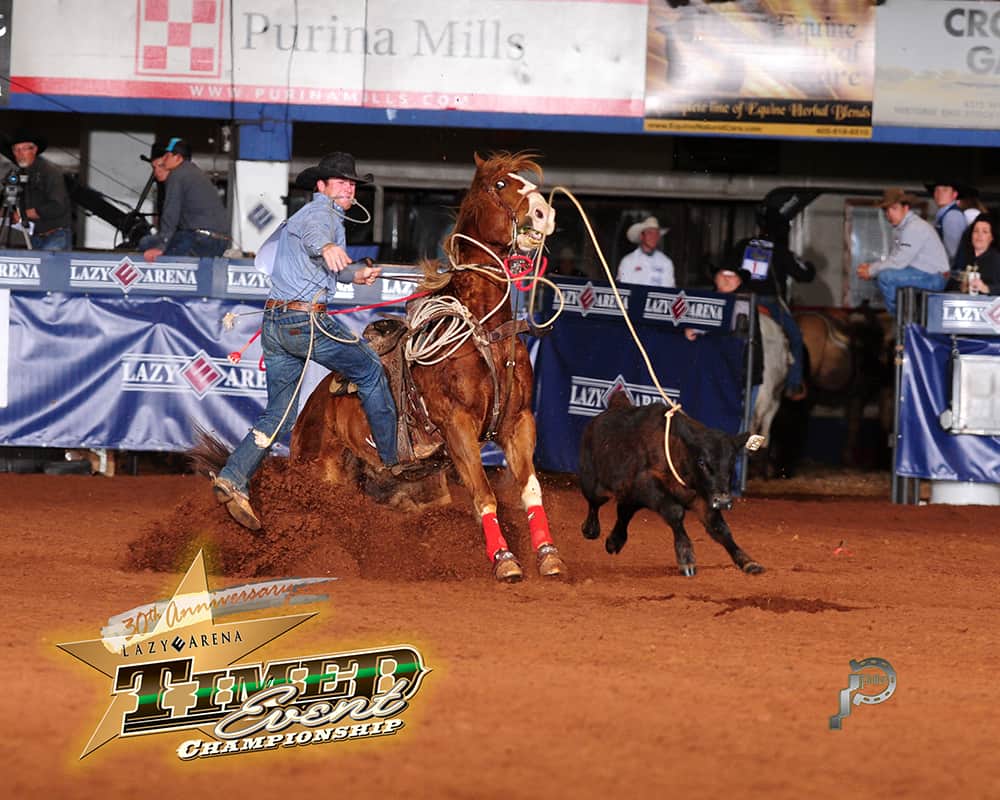 Paul David Tierney, a two-time winner of the Timed Event Championship, has qualified in both tie-down roping and heading for the Chisholm Trail Ram Prairie Circuit Finals Rodeo, which takes place Thursday-Saturday at the Stephens County Arena in Duncan, Okla.
(PHOTO BY JAMES PHIFER)

That means the race for the most coveted title in the region will come down to the three performances of the Chisholm Trail Ram Prairie Circuit Finals Rodeo, set for 7:30 p.m. Thursday, Oct. 14-Saturday, Oct. 16, at the Stephens County Arena in Duncan.

Each man understands the importance of the all-around. Jarrett, a 14-time National Finals Rodeo qualifier from nearby Comanche, Oklahoma, won the 2005 all-around world championship. Tierney is a two-time winner of the Timed Event Championship, a unique event that features cowboys battling in all five timed events.

Both men earned the right to compete for the title in the region made up of contestants and rodeos primarily in Oklahoma, Nebraska and Kansas. Jarrett is the No. 2 man in tie-down roping heading into the finale, while Tierney is ninth in both tie-down roping and heading – only the top 12 contestants in each event’s money list advances to the circuit finals.

“Qualifying in two events gives you another shot at making money,” said Tierney, who won the all-around title in 2018, the same year he and partner, Tanner Braden won the year-end team roping championship. “When you’re a two-event cowboy, it doubles your chances to do well, but at this deal, it gives you two shots to make the RAM finals.”

He’s talking about the RAM National Circuit Finals Rodeo, which features the year-end and finals-average winners from each of the 14 circuits. That event will take place next spring in Kissimmee, Florida, and offers a substantial payout and a host of other prizes, including a voucher for a RAM vehicle.

Tierney moved to Oklahoma a few years ago from his family’s ranch in South Dakota. He attended Northwestern Oklahoma State University on a rodeo scholarship and found the Sooner State to his liking. He’s been on the verge of making the NFR but has never crossed the target line.

Whereas Jarrett has focused his attention on returning to ProRodeo’s grand finale in Las Vegas, Tierney stayed closer to home and hopes to make up ground in both events in Duncan this week.

“I had a young calf horse, so I just tried to make the circuit finals on him,” he said. “He’s a really nice horse. I rode him at the Timed Event, and just getting him used to the crowds was something. It went pretty good for his first year, so I’m pretty happy.”

Ideally, he’d like to earn a trip to the RNCFR in both tie-down roping and team roping, all the while seeing if he can catch Jarrett for the all-around crown.

“Ryan is hard to beat in calf roping, and I’m sure it’s going to be hard in Duncan,” Tierney said. “I have double the money to run at, so I just need to take care of my business.”