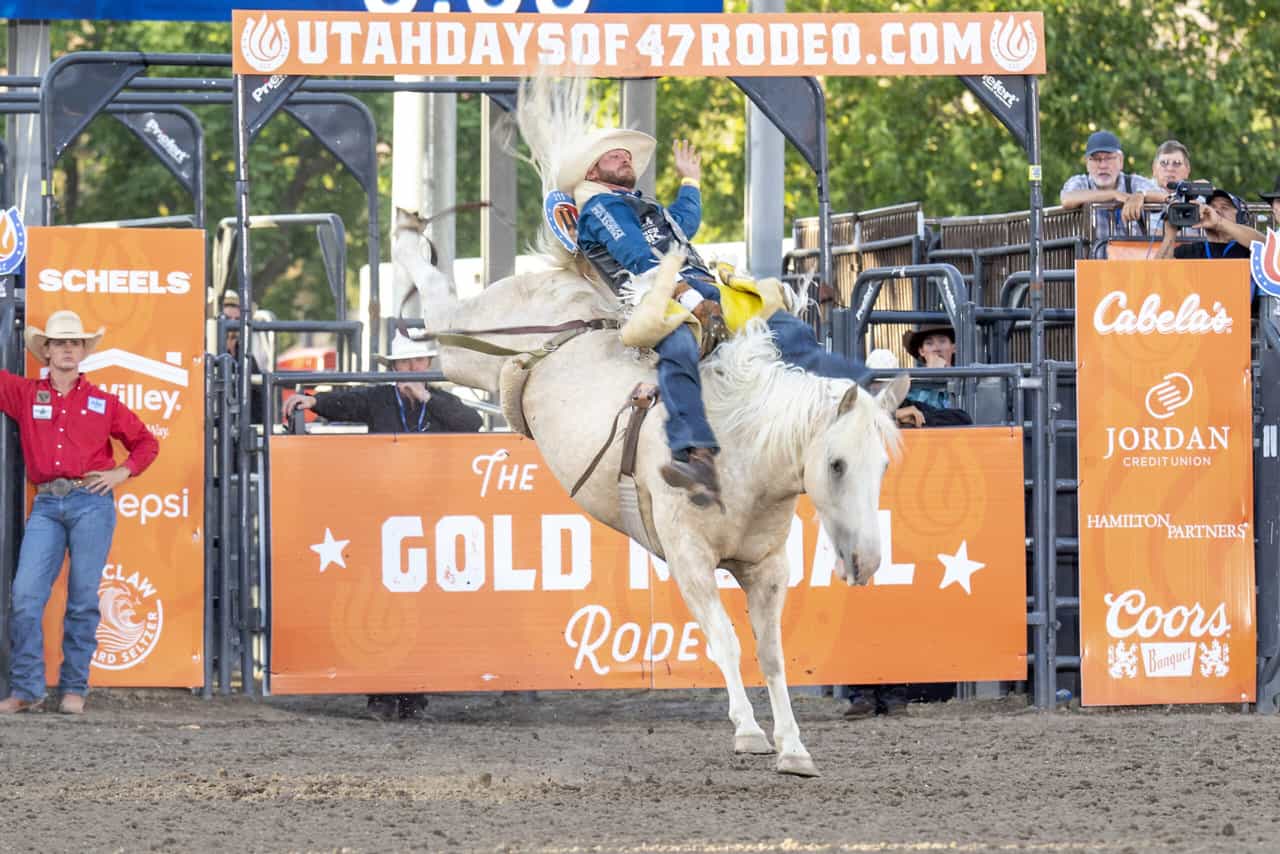 RC Landingham of Hat Creek teamed with Sankey Rodeo’s Atomic Blonde for 85 points to win the performance. Landingham had already secured his spot in the Gold Medal Round after finishing No. 1 on the recent WCRA leaderboard but winning the performance he now has another $1,600 to add to his bank account. Landingham is also WCRA Triple Crown eligible after winning the rodeo in Corpus Christi, Texas, in May. A win in Salt Lake City would get him one step closer to a chance at $1 million.

2021 Utah Days of ’47 Rodeo Gold Medalist Clayton Biglow finished second in the performance with an 83 aboard Championship Pro Rodeo’s Cat Nap. Since Landingham already had a spot in the final round, Biglow of Clements, California, will move on as well with an opportunity to defend his gold medal.

The champs showed how it was done in the team roping easily landing atop the leaderboard. After a photo finish arrival from Salinas, Kaleb Driggers and Junior Nogueira keep the adrenaline going stopping the clock in 6.96 seconds. They were the last team out on Friday night and knocked off Cory Kidd and Lane Mitchell from the top spot with their 9.49 second run. Driggers and Nogueira will be looking for gold on Monday.

Driggers had a busy night also heeling for Beau Herbert. They finished in a time of 10.16 seconds to tie for third in the round.

Mason Couch took the top spot in the steer wrestling during the third performance with a time of 4.76 seconds. Couch of Cassville, MO, will now move on with a chance of collecting his first gold medal on Monday night.

Saddle bronc rider Logan Cook came out on top with his 81.5-point ride on Championship Pro Rodeo’s Secret Agent. Cook of Alto, Texas, edged Jake Clark for the win on Friday night in Salt Lake City. Clark of Crane, OR, teamed with Utah based stock contracting company Bar T Rodeo’s Painted Rose for 81 points. Kody Rinehart of Hinkle, MS finished fourth on the night but after finishing No. 1 on the WCRA Days of ’47 Leaderboard he had already punched his ticket to the Gold Medal Round. He posted a 78.5 aboard Sankey Rodeo’s Marquee but will look to improve on that come Monday.

The Utah Days of ’47 Rodeo presented by Zions Bank, is taking place at the $17.5 million state-of-the-art Days of ’47 Arena at the Utah State Fairpark, custom designed and built for rodeo. The venue—an outdoor arena located in the heart of Salt Lake City—features over 10,000 stadium-style seats.

The Utah Days of ’47 Rodeo is a unique rodeo and the crowd on Friday night was treated to another unique display of talent in the tie-down roper. The majority of tie-down ropers rope right-handed but not Jaxon Clegg as he is a lefty. The 20-year-old from Coweta, OK, is looking to be the first Utah Days of ’47 gold medalist that is a left-handed roper. He stopped the clock in 8.81 seconds to win the third performance. We will see what he can do on Monday night.

Bradi Good saved the best for last in the breakaway roping on night No. 3 in Salt Lake City. Good stopped the clock in a quick time of 3.11 seconds surpassing Ari-Anna Flynn who was the first roper out on the night. Flynn finished second in 3.51 seconds.

Flynn of Charleston, AR, competed in back-to-back events tonight finishing fourth in the barrel racing in a time of 17.599 seconds. Halyn Lide of China Springs, Texas, won the round in a time of 17.199. Lide, who won the WCRA rodeo in Corpus Christi, Texas, in May is looking for another WCRA win and a gold medal on Monday.

Once again the best was saved for last in the bull riding. With no other qualified rides heading into the final bull rider, Cole Fischer rose to the occasion and knocked out an 87-point ride on Bar T Rodeo’s Exit Strategy. Fisher of Jefferson City, Missouri, will return on Monday with hopes of another 8-second ride and a score that would earn him his first gold medal.

For only the seventh time in the history of rodeo, riders will have an opportunity to compete for Gold, Silver or Bronze Medals. The first two times were in conjunction with the Olympic Winter Games in Calgary (1988) and Salt Lake City (2002), when rodeo was part of the Cultural Olympiad and the other four times being the Days of ’47 Cowboy Games and Rodeo 2017-2021. 2022 marks an official name change of the event to Utah Days of ’47 Rodeo. This will be the third time for breakaway ropers as their event was added to the roster in 2019. The medals that will be awarded at the Utah Days of ’47 Rodeo will be produced by OC Tanner, the same company that made the Olympic medals for the champions of the 2002 Olympic Winter Games.

Tickets are still available for Monday only at www.axs.com. For more information on the event visit www.utahdaysof47rodeo.com.