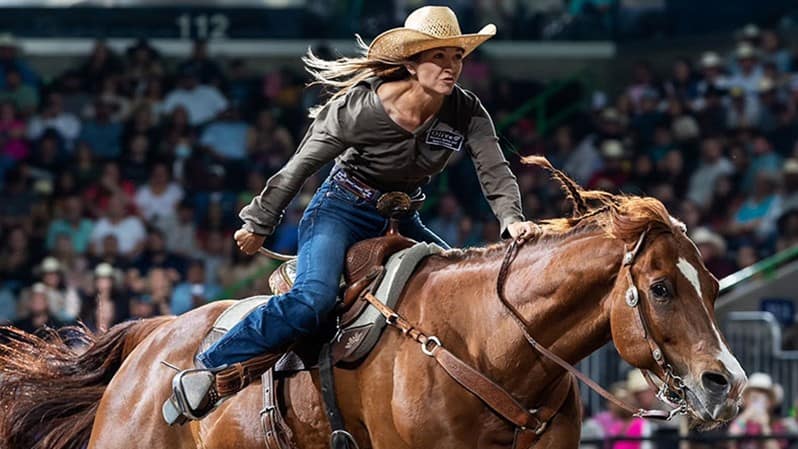 World champs to unknown underdogs, rising stars to rodeo retirees, moms and dads with day jobs to weekend warriors by choice. The $553,000 spectacle that was Rodeo Corpus Christi 2022 had it all, and the World Champions Rodeo Alliance lived up to its claim of being #AllForRodeo yet again. Does it get any better than a local horseshoer named Quisto Lopez teaming up with fellow area team roper Daniel Braman and outgunning reigning World Champions Kaleb Driggers and Junior Nogueira in the Triple Crown of Rodeo Round presented by the Lazy E Arena? Not if they call you Quisto.

“My dad brought me to slacks here at Rodeo Corpus Christi when I was a little kid, so this rodeo has been part of my whole life,” beamed the happy heading champ, who was suddenly $16,600 richer, as was his heeler, Braman. “This is my biggest win ever at one rodeo, and it’s amazing to have this happen so close to home. I think I’ve entered this rodeo six times and placed here five times, so it’s been very good to me. I’ve been rodeoing with Cody Thornton this year, but he couldn’t come to Corpus because he’s on his honeymoon. I guess it was just meant to be for Daniel and me this time.

“The most special thing to me about winning this rodeo is that the team roping is sponsored by Hamman Excavating, which was owned by my best friend Bobby Pullin, who died a year and a half ago. His family stayed behind this rodeo to honor Bobby’s memory, and to win something that still has his hand on it means so much to me.”

For any contestants out there who can’t quite be sure about the financial opportunities funded by the WCRA, Lopez got into Rodeo Corpus Christi—where contestants paid no entry fees—by nominating one rodeo he was already going to.

“I squeaked in on the very last day nominations were open by nominating the rodeo in Bulverde, Texas, and won it with Colton Johnson,” Quisto said with a smile. “Turned out to be a heck of an investment.”

“Up to $10,000 of money won at WCRA events counts toward the IPRA standings, and between winning $4,200 at Cowtown Christmas in Fort Worth in December and $6,000 here at Rodeo Corpus Christi, I’m now No. 1 in the IPRA all thanks to the WCRA,” said Garland, who enjoyed the beach so much that he skipped town with a sunburn surrounding that smile. “The only reason I’m No. 1 and have a jump on my third straight IPRA championship is the WCRA.”

Barrel racing wife and mom Halyn Lide was so happy for her 10-year-old sorrel horse Keeper that she didn’t even try to contain herself. With same-night runs in the Showdown and Triple Crown of Rodeo Rounds, Lide and Keeper hauled $17,800 five hours home to China Spring, Texas.

“He wanted this win, and he deserves it,” Halyn said. “We raised Keeper, and my (veterinarian) husband Aaron put the very first rides on him. He said early on, ‘He’s a keeper,’ and that’s how he got his name. We’ve placed at places like Cheyenne (Wyoming) and Salinas (California), but Keeper’s been waiting a long time for our first big win.”

The Lides have two young children, Lawton (5) and Alston (3). On top of raising kids, Halyn helps Aaron by keeping the books at their Texas Animal Medical Center. There was horse and human wonderment as they all walked away with the prized Rodeo Corpus Christi surfboard in tow.

“Keeper’s cool. I’m not. I don’t know what he’s going to do with a surfboard, but he’s who earned it,” said Halyn, who barely beat out Arkansas cowgirl Ari-Anna Flynn for the big win, with a smile.

Texas tie-down roper Kincade Henry, 20, dominated both the Showdown and Triple Crown of Rodeo Rounds in his trademark event. He and his roan, game-changing horse Mario, 16, loaded up $16,600 before leaving town. But make no mistake—Henry has his sights set on the $1 million Triple Crown of Rodeo bonus that’s up for grabs to anyone who can win three straight WCRA majors in a single season.

“I can’t complain about $16,000, but we’re all here to try to win three in a row and win the million—you can’t pass that up,” said the sophomore student at Panola College in Carthage, Texas, who plans to transfer to Texas A&M Commerce to pursue a bachelor’s degree in business come fall.

The late RE Josey—husband of ProRodeo Hall of Fame Barrel Racer Martha—first put a rope in Henry’s hand when he was 12. Josey died in February, but Kincade will return to the Josey Ranch in Karnack, Texas, to help people like his dad, Chad Henry, carry on RE’s 50-plus-year tradition of the annual weeklong roping school in June.

“If it weren’t for RE, I’d probably be playing baseball,” Henry said. “I owe him a lot, so I’ll go back to the place where I grew up roping and help carry on what he started.”

This kid has gathered great inspiration from the other end of the arena as well.

“To win $18,000 in one place this time of year is a big deal,” Landingham said. “It’s nice to be able to hang out in one place for a week and still go home with $18 grand. The cost of fuel and flights has gone way up, so a win like this one will go a long way toward the cost of rodeoing this summer. None of us would be here if it weren’t worth it.”

Cowgirl cool was 20-time World Champion Jackie Crawford lighting things up for $16,600 in the breakaway roping with a scorching 1.82-second show stopper, with her littles, Creed and Journey, watching momma work. So sweet to see 20-year-old Bradi Good come oh so close at 2.14 to upstaging a living legend like Crawford.

Coming off of back-to-back Wrangler National Finals Rodeo qualifications, it was no surprise to see Wyatt Casper strike for $15,000 in the Triple Crown of Rodeo Round after racking up 90.5 points on Dakota Rodeo’s Bartender. Four-time NFR bronc rider Cole Elshere was second. Cameron Messier from Herald, California, who’s currently cracked pro rodeo’s top 50, placed third and proved he also belongs on center stage.

Steer wrestling champ Riley Duvall has bulldogged at Rodeo’s Super Bowl four times now and was by far the busiest bulldogger at Rodeo Corpus Christi. In the three-man Triple Crown of Rodeo Round, Riley hazed for reserve champ and soda-truck delivery driver Tony Aska, then slammed his steer in 4.15 seconds to barely edge Aska, then hopped back on a hazing horse to try and help Tanner Brunner try to beat him. That’s a bulldogger for you, and why it seemed so fitting to see Riley skip town $16,200 richer.

Yes, Rodeo Corpus Christi 2022 had it all. And when the rodeo athletes turn on the afterburners to thrill a packed house, well, that’s as good as it gets.