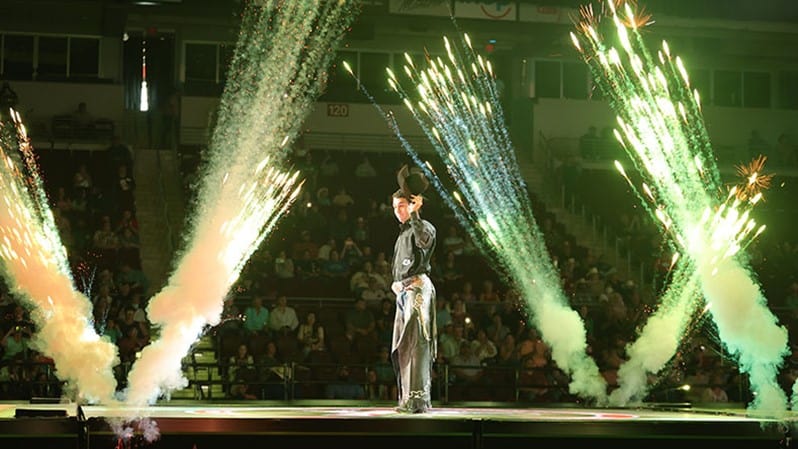 As the only rider to go a perfect 3-for-3, Santos entered the championship round second on the event leaderboard after delivering matching 87-point scores atop Back Jack (Flying M/Hilton/Winston) and Stetson (CG Bucking Bulls/Big Rafter Rodeo) in Round 1 and 2, respectively.

Santos then clinched the golden finish when he bested Twilight Zone (Carr Pro Rodeo) for a monstrous 90.75-points in the final round.

For his efforts, Santos netted 133.5 world points, elevating him from No. 16 to No. 9 in the world standings. Battling a nagging rib injury as the season continued, Santos completed the 2021 season with his first appearance at the prestigious PBR World Finals, ranked a career-best No. 20 in the world.

The bull riding action for the 2022 PBR Bad Boy Mowers Mowdown begins with Round 1 at 7:45 p.m. CST on Friday, February 25, followed by Round 2 and the championship round at 6:45 p.m. CST on Saturday, February 26. All competing bull riders will get on one bull each in Rounds 1-2. Following Round 2 Saturday evening, the riders’ individual two-round scores will be totaled with the Top 12 advancing to the championship round for one more out and a chance at the event title.

Tickets for the two-day event go on sale Monday, December 6 at 10:00 a.m. CST, and start at $15, taxes and fees not included. Tickets can be purchased online at ticketmaster.com and PBR.com, at the Simmons Bank Arena Box Office, or by calling PBR customer service at 1-800-732-1727.

Two-day ticket packages will also be available, offering fans up to a 10% discount on select price levels.

PBR Elite Seats are available for avid fans who want an exclusive VIP experience while enjoying the world’s top bull riding circuit. These tickets, available in three tiers, offer premium seats, a question-and-answer presentation with some of the top bull riders and stock contractors in the world, a behind-the-scenes look at the event from the back of the bucking chutes, a $10 concession voucher and souvenir credential and lanyard.

Available for $450 is the PBR Premier Elite Seat with souvenir chair. Offering the best views in the venue, fans will receive a limited-edition PBR folding chair to take home following the event.

The Elite Experience, available for $75, will include a Q&A session with a select group of the league’s top riders, bullfighters and stock contractors, pre-event photo on the bucking chutes, arena concession voucher, Stars of the PBR book, and commemorative credential and lanyard.

The Bull Housing Tour, available for $50, will get experience-purchasers up-close-and-personal with the league’s top animal athletes and include a commemorative lanyard and Bulls of the PBR book.

For more information on PBR Elite Seats and PBR Premium Experiences, or to purchase the Elite Experience for the PBR Bad Boy Mowers Mowdown in Arkansas visit https://pbr.com/tickets/premium-experiences/.