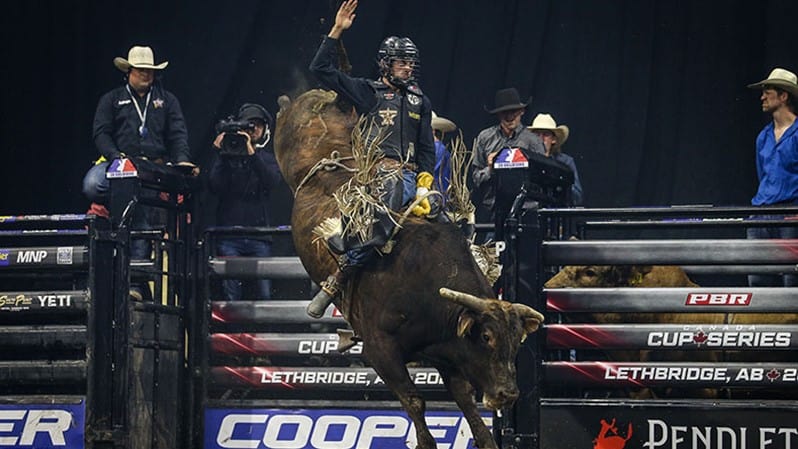 West delivered his lone score of the event in the opening round of action at the Meadow Lake Stampede Grounds, covering New Tattoo (Wild Hoggs Bucking Bulls) for 84 points.

Unranked prior to the event, West surged to No. 7 in the fierce race to be crowned the 2022 PBR Canada Champion and earn the accompanying $50,000 bonus. He is now within a mere 24 points of standings leader Blake Smith (Abbey, Saskatchewan).

Buttar, who also earned the silver finish at the PBR Canada Touring Pro Division event in Meadow Lake on Thursday evening, was a picture of perfection atop Salty Dog (Eno Bucking Bulls). He reached the requisite 8 for 83 points.

Garnering 15 national points in his home province, Buttar rose from No. 5 to No. 2 in the standings. He is now within a slim 6 points of No. 1 Smith.

Coverchuk rode Jail Break (Wilson Rodeo) for 79 points in Round 1 to secure the podium finish.

Attempting to tie Roy for most national titles won by one rider, Coverchuk is now No. 8 in the national standings, having risen one position. He trails the top rank by 26 national points.

The 2022 PBR Canada Season continues June 11 in Red Deer, Alberta, for the first event of the 2022 season for the elite Cup Series, presented by Wrangler. Action for the PBR Red Deer Classic, presented by Tsunami Water Solutions, at Peavey Mart Centrium, gets underway at 7 p.m. MT.