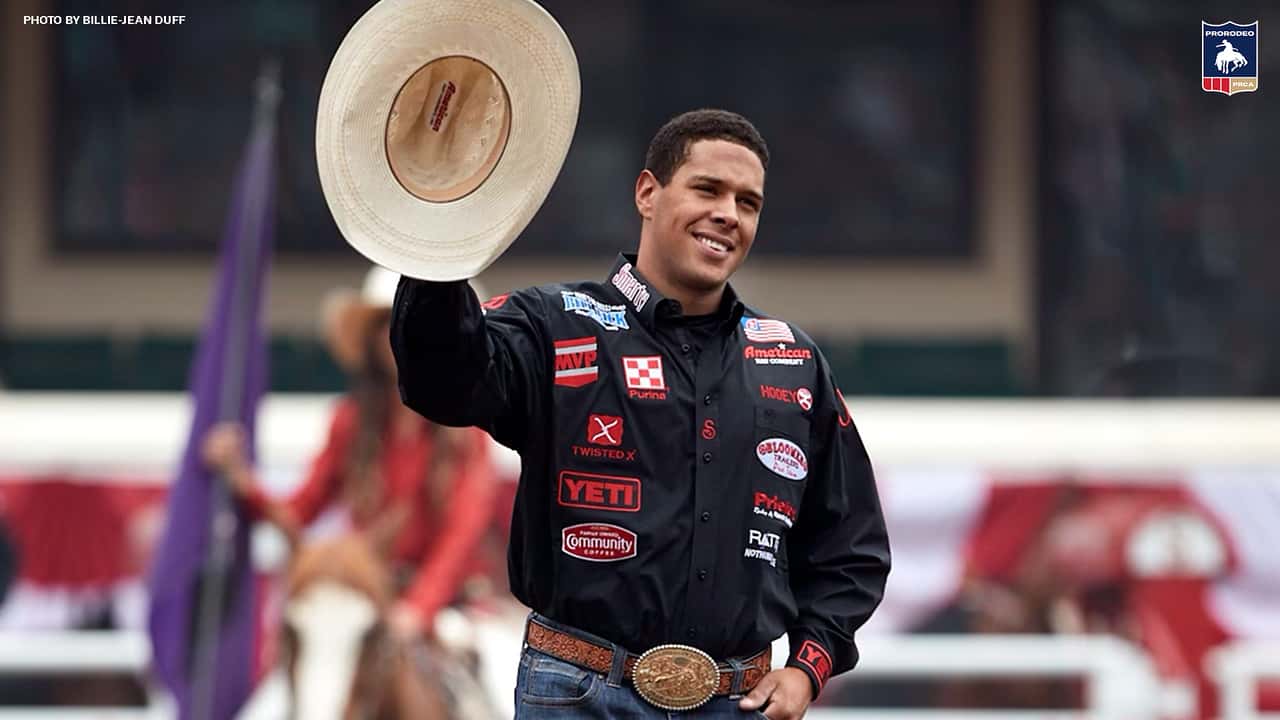 It was Shad Mayfield’s first trip to the prestigious Calgary Stampede last week, and he made sure that rodeo fans north of the border won’t soon forget his name.

The Clovis, N.M., cowboy put together the fastest tie-down roping time of the year in the PRCA, stopping the clock at 6.5 seconds to win round four of Pool B. The previous top time was Hunter Herrin at 6.6 seconds at the same rodeo just days earlier.

It was a run the 2020 PRCA World Champion will never forget.

“That calf went left on me right out of the gate, which in that case is usually a tough spot to put up a good time,” said Mayfield, 20. “But my instincts kicked in and I just threw my rope and went as fast as I possibly could. A 6.5-second run is so fast I can hardly even remember what happened after I threw my rope. It was for sure the fastest run I’ve ever made, and I’m glad it was in Calgary.”

Mayfield will be looking to repeat as world champ at the NFR this year in Las Vegas. He is sitting fourth in the PRCA | RAM World Standings with $79,421 after an $18,500 payday in Calgary. He knows it’s never easy to go back-to-back in the sport of ProRodeo.

“It’s extremely competitive this year at the top of the standings, I feel like anyone inside the Top 15 can go to Las Vegas and win the whole thing this season,” Mayfield said. “This will definitely help me get closer to the guys that are at the top of the standings, and throughout the year every dollar counts. I learned that last year, winning my first world championship.”

Mayfield will be back in the States this week, competing at the Fiesta Days Rodeo in Spanish Fork, Utah.

Below are the other top times and rides for the week of July 12-18.

Three cowboys tied for the fastest steer wrestling time of the week. Will Lummus, Wyatt Jurney and Jace Melvin all put together 3.5-second runs. Lummus did it at the Sheridan WYO Rodeo July 17, while Journey and Melvin pulled off theirs at the Cattlemen’s Days Inc., Melvin on July 16, Jurney July 17.

John Gaona and Trevor Nowlin clocked the fastest team roping time of the week. The duo clocked a 3.4-second run on July 15 at the Central Wyoming Fair & PRCA Rodeo in Casper, setting an arena record in the process.

Brody Cress continued his impressive season over the weekend. He put together the top saddle bronc riding score of the week, going for 94.5-points on Calgary Stampede’s Special Delivery July 18 to win the rodeo. That score tied for the second highest in PRCA history.

Brighton Bauman clocked the fastest breakaway roping time of the week with a 1.7-second run at the Mesquite (Texas) Breakaway Roping July 17.

Chrissy Chromczak had the quickest barrel racing run. She stopped the clock at 14.81 seconds at the Painted Pony Championship Rodeo in Lake Luzerne, N.Y.

Scott Snedecor put together the fastest steer roping time of the week. He had a 10.4-second run at the Sheridan WYO Rodeo on July 16.