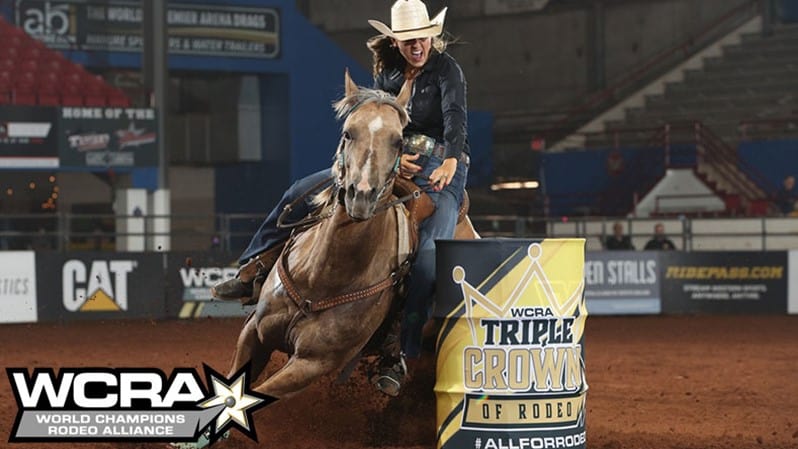 GUTHRIE, Okla. – As the first discipline of the Stampede at The E, bareback riding had the fans inside Lazy E Arena on the edge of their seats throughout the action-packed night where contenders prevailed. After Jake Brown (Cleveland, Texas) and Orin Larsen (Inglis, Manitoba) advanced to the showdown round tied courtesy of matching 86.5-point rides, the two quickly became immersed in a shootout for the $12,500 Major payday in the showdown round. Outscoring Larsen, the victor from the 2020 Royal City Roundup who was seeking his second win in the Triple Crown, by 0.5 points, Brown delivered a critical 87.5-point ride on Top Flight to capture the victory.

As the Saturday evening event continued, a hotly contested race in the saddle bronc riding began to unfurl. Tying for the long round win, Shorty Garrett (Dupree, South Dakota) and Taos Muncy (Corona, New Mexico) entered the showdown round with equally scored 83-point rides earned aboard Real Fancy and Damaged Goods, respectively. Calm and collected, Garret remained poised on the chutes as he readied for what would be a career defining moment. Reaching the requisite 8 aboard Delta Dawn for 82.5 points, Garrett captured his first-ever WCRA Major win and accompanying $12,500 payday.

In the bull riding, PBR (Professional Bull Riders) world No. 1 Jose Vitor Leme (Ribas do Rio Pardo, Brazil) rode supreme. Capping his perfect 2-for-2 effort on Saturday evening, the former semi-professional soccer player rode Nailed for a monstrous 89.5 points to net an equally impressive check for $62,500. Unlike the other disciplines at the Sooner State event which paid out a combined $28,000, the bull riding featured a $78,000 purse. The $50,000 champion payout from the Kansas City Royal City Roundup Major carried over after no qualified rides were recorded in the showdown round.

The team roping title was won by the duo of header Colby Lovell (Madisonville, Texas) and heeler Paul Eaves (Londedell, Missouri), notching a 11.04-second run. They edged the runner-up duo of Erich Rogers (Round Rock, Arizona) and Paden Bray (Stephenville, Texas) who logged an 11.2-second effort. The second-place finish dashed the hopes of Rogers and Bray who were hoping to leave the Lazy E with their second victory in the WCRA Triple Crown of rodeo after topping the discipline at the first Major of the year in Kansas City in February.

Stockton Graves (Alva, Oklahoma) was unstoppable in the steer wrestling. The Northwestern Oklahoma State University Steer Wrestling Coach recorded a 3.85-second run in the long round, prior to delivering a lightning-fast 5.08-second effort in the showdown round. The victory is Graves’ second WCRA Major win, capturing his first title in 2019 in Green Bay, Wisconsin.

In tie down roping, 17-year-old Riley Webb (Decatur, Texas) was the undeniable star of the discipline, delivering what would be the most groundbreaking performance of the event. As the only athlete to deliver a qualified run in the showdown round, his 8.5-second effort elevated him to a $16,500 payday. For Webb, fresh off his win at the National High School Rodeo Finals (NHSRF), the event marked his career first WCRA Major, advancing to the main event through the DY (youth) Pool. Not only did Webb emerge victorious, but did so by defeating WCRA Royal City Roundup Champion, 2019 NHSRF Champion and the world’s No. 1-ranked tie down roper Shad Mayfield (Clovis, New Mexico) who failed to catch in the showdown round. Webb also defeated 2013 PRCA World Champion Shane Hanchey (Carmine, Texas) the final athlete to compete in the showdown round.

When ladies breakaway roping and barrel racing took center stage, the female athletes of the WCRA shined bright. Chelsey Abernathy (Athens, Alabama) won the breakaway roping title at the Stampede at The E courtesy of her 2.14-second run in the long round, and 2.09-second run in the showdown round, both the quickest times of the rounds. Abernathy topped Kelsie Chace’s 2.50-second time, knocking Chace out of the race for the Triple Crown of Rode $1 Million bonus. In the barrel racing 2019 Titletown Stampede Major Champion Michelle Darling (Medford, Oklahoma) and mare Martini expertly navigated the course as her 15.481-second run in the showdown round was the quickest, distancing runner-up Wenda Johnson (Pawhuska, Oklahoma) who recorded a 15.676-second run.

On Saturday, August 29 fans will be able to tune into the Stampede at The E on a CBS network broadcast at 8:00 p.m. ET.

Fans can relive all the action from the WCRA’s Stampede at The E on Sunday, August 16 at 8:00 a.m. EST on RidePass, at RidePass.com or via the RidePass app available on iOS, Android and Roku.