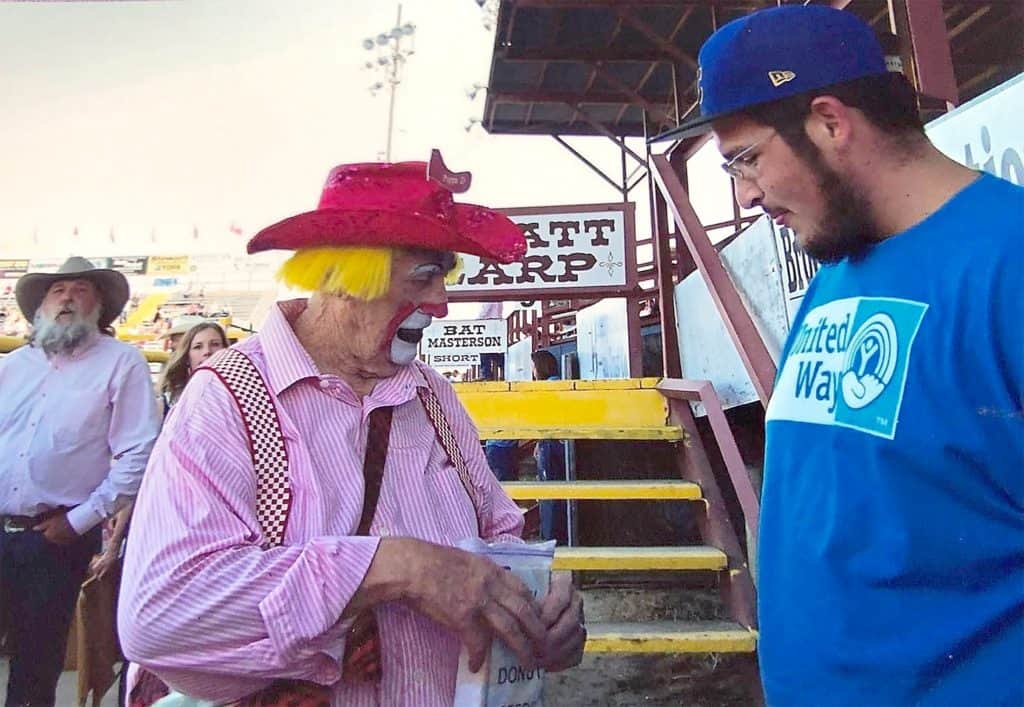 Doug Munsell Sr. entertains a Dodge City Roundup Rodeo fan at a recent rodeo. He has been a fixture at Roundup Arena for years, and he does much more than clowning while there.
(PHOTO COURTESY OF THE MUNSELL FAMILY)

DODGE CITY, Kan. – Most who have ever been to Dodge City Roundup Rodeo have seen Doug Munsell Sr. over the years.

He’s a professional clown and has been for better than 60 years, but he’s much more than that to the biggest rodeo in Kansas every year. Munsell, who has spent much of his life in Liberal, has volunteered for Roundup for the past two decades. He’s already busy getting things ready for this year’s rodeo, set for 7:45 p.m. Wednesday, Aug. 4-Sunday, Aug. 8, at Roundup Arena; Dodge City Xtreme Bulls is set for 7:45 p.m. Tuesday, Aug. 3.

“I was at the parade in Garden City (Kansas) for that rodeo, and Doc Trotter was there,” Munsell said of Dr. R.C. Trotter, the longtime president of the volunteer committee that organizes the annual rodeo. “We got to talking, and I’m still here.”

Here means his volunteerism, which happens throughout the year. During the week of the rodeo, “PoppaD” will venture around the Roundup Arena grounds and entertain children of all ages. He’s a clown in every sense of the word, and it’s a marvelous payoff for fans who want to be entertained for a few hours every summer.

He also comes by it naturally. He was raised in Mooreland, Oklahoma, and around rodeo. He and his family went to the Woodward (Oklahoma) Elks Rodeo every year.

“They had steer riding, and I rode steers every year; we got a silver dollar,” he said with a chuckle. “Then I started rodeoing when I moved to Liberal.”

“It was something else to do, be a rodeo clown and a bullfighter, but it wasn’t very often,” said Munsell, 81. “I did it often enough to make Mama (his wife) mad. Now, the kids are all involved in it.”

That’s true. Doug Munsell Jr. is a cowboy who has been a rodeo clown for years. His son, Wacey, is a professional bullfighter who has worked at the National Finals Rodeo and has been involved with Roundup Rodeo for most of the last decade.

“That’s changed a lot since I started fighting bulls,” Doug Munsell Sr. said. “Used to, we did nothing but wear our baggy clothes. Now, they look like football players.”

But Munsell is more than a clown. He adores rodeo, and he handles a lot of general labor duties behind the scenes.

“Every year, I do the pre-rodeo entertainment, going out and doing tricks to entertain the kids … and the adults,” he said. “I’m also the campground cleaner-upper. That takes me most of the afternoon. I go clean out the sheds that need to be cleaned out and whatever else they ask me to do.”

It’s all associated with his two-part calling: Rodeo and volunteerism. He’s been doing it for so many years that it’s just second-nature. He’s one of dozens of people who volunteer for Roundup Rodeo every year, and he knows there’s always a need for more.

“You just need to reach out to people and offer someone a job you think they could do,” Munsell said. “It might be a small job to start with, but hopefully they get hooked and it takes off from there.”

That’s just what Roundup and the Dodge City community needs.