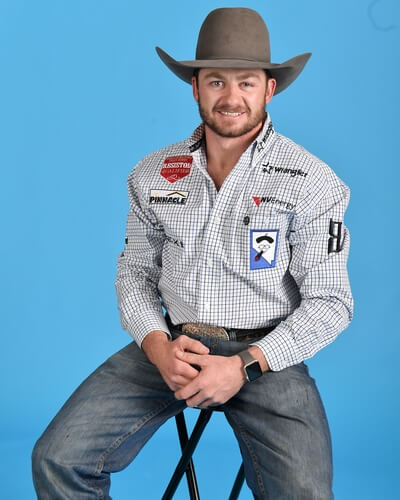 Qualifying for his third Wrangler National Finals Rodeo was a bit of déjà vu for Wyatt Denny. The Minden, Nevada, cowboy first made the field in Las Vegas in 2015, squeaking into the finals in 15th place.

Last year, thanks to winning more than $50,000 at one rodeo, he rolled into town in fifth place in the standings. This year, his season got off to a slower start than what he wanted. He broke into the top 20 in the world standings in June. His bid for a third consecutive NFR picked up momentum over the Fourth-of-July weekend when he won nearly $5,000 at Livingston, Montana. The win came at a cost and took some planning. He competed at Red Lodge, then got on a plane they had chartered to get to Livingston. That win helped him move into the Top 15 where he managed to stay for the rest of the season.

Wyatt placed in five rounds at his first NFR, but didn’t fare as well last year, winning only $30,000 in the Thomas & Mack Arena. He will be aiming to better his 2016 winnings this year on rodeo’s biggest stage.

As a youngster, Wyatt competed in all the rodeo events and still enjoys roping whenever he can. He skied competitively until he was 13 years old and still loves to ski. Wyatt has watched Grant win the Cowboy Downhill held during the National Western Stock Show in Denver twice. Competing and winning at the Cowboy Downhill is now on Wyatt’s bucket list. When he enters the Denver rodeo he includes plans for a trip to Steamboat to compete in the ski race and support the Justin Cowboy Crisis Fund.

When Wyatt is not at a rodeo or helping at the family ranch or construction business, he enjoys fishing and water sports. Minden is less than 40 miles from Reno, making the Reno Rodeo one of his favorites.