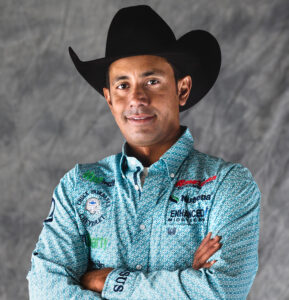 Fun Facts about Junior: Every morning, no matter what he is doing or where he is, Junior calls his mom. And every morning she prays for and with him. The native Brazilian says it is part of his family’s culture, but in reality it is much more than that. Both of his parents roped, mostly heading. Junior heeled his first steer while roping on a pony in Brazil behind his father when he was a toddler. His father passed away when he was five and he continued to rope with his mother. They might not get to rope together now, but they can pray together. Junior came to the U.S. to become a better roper. He had help and encouragement on that journey from Jake Barnes. At the end of the 2021 season, he was the world’s best heeler. He joined his partner, Kaleb Driggers, in the $2 million club with a check won at the Puyallup Rodeo in Washington in September. They were the big money winners over the Fourth-of-July and came close to a new record for Cowboy Christmas. Trevor Brazile holds that record and was competing in two events. Junior is quick to give credit to his horses who have made this the best year of his career. But really his success is a team effort with the captain of the team being God. He and his wife, Jaqueline, have a 2-year-old daughter, Isabella. They also had a son in 2022 and he is appropriately named Jake.