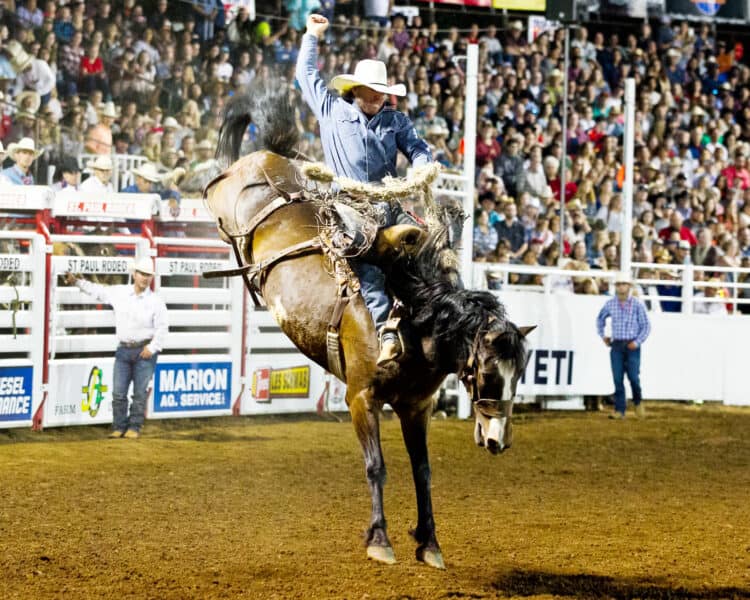 Cort Scheer rides Kool Toddy for 89 points at the 2019 St. Paul Rodeo, to break the arena record. The 22-year-old mare is owned by Flying Five/Big Bend Rodeo Co. and has bucked at the biggest rodeos in the nation. Photo by Hoot Creek.

St. Paul, Ore. – A bucking horse who helped break a St. Paul Rodeo record in 2019 is back for this year’s rodeo.

The mare, who has paint markings on each side of her belly, is an exceptional horse, said Chad Hutsell, one of her owners and caretakers along with Sonny Riley.

She’s bucked at the biggest rodeos across the nation, he said. “She’s been to about every big rodeo there is on this side of the Mississippi River,” including Rodeo Houston, the Calgary Stampede, Cloverdale, British Columbia, San Juan Capistrano, Calif., and even pro rodeo’s biggest stage, the Wrangler National Finals Rodeo, where she’s been selected to work fifteen times.

For Scheer, a six-time Wrangler NFR qualifier, it wasn’t his first time aboard the horse.

“That horse has been amazing for years,” he told the Pro Rodeo Sports News after his ride in 2019. “I’ve been on that horse four or five times now, and she has been unbelievable every time.”

Hutsell said, if saddle bronc riders don’t make a mistake, she’ll carry them to a win. “But if they stub their toe, they won’t do well.” He hasn’t kept track of how much money has been won riding Kool Toddy, but it’s a lot. “I don’t know how many hundreds of thousands of dollars they’ve won on that mare, but if you think of all the big rodeos she’s been to, it’s a lot.”

Kool Toddy has been bucking since she was five years old, and because of the excellent care given to her, continues into her second decade. Hutsell will watch for signs from her before he retires her. “I let the horses tell me when they’re done (bucking),” he said. “And she’s not done. She still loves going and getting on the truck.”

Last year, with rodeos canceled due to the pandemic, bucking horses stayed home. But they missed being on the road, Hutsell said, and he could tell. One day, a semi and trailer drove by the Hutsell ranch, with the trailer rattling and getting their attention. “Half of the herd, their heads popped up like, do we get to go somewhere?”

Inside the rodeo arena, she’s a great ride for cowboys. Outside, she’s standoffish, Hutsell said.

“She is not a people-person horse at all. She’ll wrinkle her nose when people come around.”

His and wife Lindsay’s fifteen-year-old son, Bronc, can attest to that. Last winter, Kool Toddy and another bucking horse, Spring Planting, were stalled in the barn together. Every day, Bronc took treats out to the horses; Spring Planting would eat her treat out of his hand; Kool Toddy would not. He persisted, but she never changed her mind. “He’d set it down on the ground or on a fence post, and she’d walk over and get it,” Hutsell said.

Kool Toddy’s dam was Hot Toddy; her sire was Iron Mountain. When she retires, she will become a brood mare.

The mare, along with about 100 other head of bucking horses and bulls, will compete at the St. Paul Rodeo, held June 30-July 4. Performances begin nightly at 7:30 pm with a 1:30 pm matinee on July 4.

Tickets can be purchased online at StPaulRodeo.com; they range in price from $20-$26.