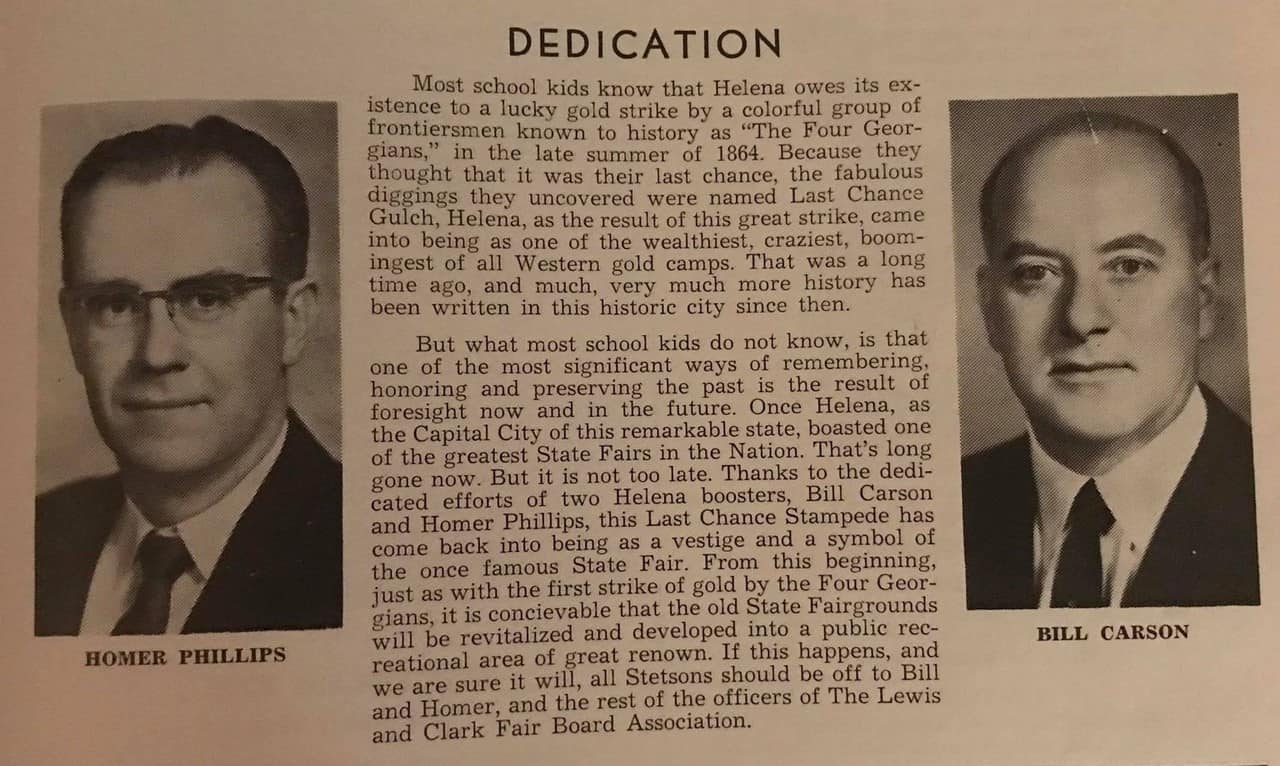 Homer Phillips and Bill Carson were the founders of the Last Chance Stampede and Fair in 1961, the first year of the event. This is the 60th anniversary of the event.

Helena, Mont. – If only the arena could talk, at the Lewis and Clark Fairgrounds in Helena, there’s a lot it would say.

It’s seen sixty years of hosting the Last Chance Stampede and Fair, which started in 1961.

The Last Chance Stampede and Fair is not the first fair to be held in its present-day location.

The Montana State Fair took place there from 1891-1932, but ended due to the Great Depression.

Then the facility sat empty, with only the occasional small rodeo or stock car race taking place there.

The state owned the facility and planned to sell the ground, but two Helena men: Bill Carson and Homer Phillips, saved it, convincing the state to transfer ownership to Lewis and Clark County Fairgrounds.

Loren Davis was 25 years old when the first Stampede and Fair was held, in 1961. A member of the Helena Jaycees, he remembers helping as an usher, being on the parade committee and on the Last Chance Stampede queen committee.

In 1979, he was asked to head the Stampede committee, which he agreed to, so long as he had help. Frank Montibeller, who had been a committee member longer than Davis, agreed to help, but it wasn’t long and Davis was on his own as chairman.

He remembers the rodeo personnel well.

The first stock contractor for the Stampede was Oral Zumwalt, of Missoula, and then Cotton Rosser, Flying U Rodeo, from California, came in. Rosser was a showman, Davis remembered, and was instrumental in strengthening the entertainment quality of the rodeo.

After Flying U, the stock contracting bid went to Sonny Linger of Miles City, Mont., then to Bob Barnes, Cherokee, Iowa, then to Keslers, who had a ranch in Canada and a second one in Helena.

During his tenure as Stampede chairman, Davis decided that fans wanted not just a rodeo, but a show.

“I’d look around and nobody in the stands was keeping the daysheets. They were just there to see the show.”

He realized the importance not only putting on a good rodeo, but of entertaining fans, and the committee hired some of the best entertainers in the industry: trick riders Vicki and Leon Adams, John Payne the One Arm Bandit, Jerry Olson and his buffalo, and more. 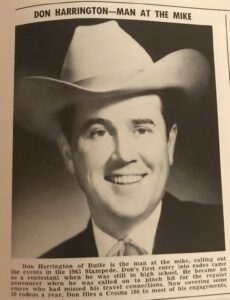 Don Harrington, Butte, Mont., was the first announcer for the Last Chance Stampede and Fair. He called the event from 1961-1978.

The announcers were also a part of the entertainment equation. The first announcer was Don Harrington, of Butte. Zoop Dove announced the rodeo for a while, then, under Barnes’ contract, Boyd Polhamus came in. Wayne Brooks, the rodeo’s current announcer, started in the late 1990s.

Davis attended the annual PRCA convention, to learn more about the industry and meet people. “It helped me,” he said. “That’s how I found out who the best clowns and acts were. We had some of the best.”

Davis also remembers the wooden grandstands for the Stampede and Fair.

One year, a set of grandstands burned down in Europe during a soccer game. The Lewis and Clark County commissioners were concerned about the wooden ones at the fairgrounds, so they hired an engineer to make an assessment.

He determined they were unsafe, so the county commissioners decided to cancel the Stampede that year.

But Davis wouldn’t hear of it. There were rodeo contracts to fulfill, that would have had to been paid out even if the rodeo was canceled.

So the Stampede committee got new metal grandstands installed. “They rattled,” Davis remembers, “when people walked on them. Hearing the loudspeaker was almost impossible.”

In 2005, the county issued a $8 million bond to redo the fairgrounds. It was Davis’ last year on the board.

The bond issue passed, “and now we have a first-class fairgrounds,” he said.

“It’s one of the best things that Helena ever did. Because now we can bring in other entertainment, and it’s paid for itself, I’ll tell you.”

Putting on a show as part of the Stampede and Fair was always Davis’ vision. “Everybody wants a show. A good rodeo, you can find anywhere, but when you get to the PRCA, it’s one step above.”

He owned Davis Business Machines for 51 years, and credits his employees with running the business while he volunteered with the Stampede and Fair. “I thanked every one of them,” he said. “My business never skipped a beat and I spent a lot of time at the fairgrounds.”

For Davis, it was a matter of pride in the quality of the Last Chance Stampede and Fair.

“If you’re going to do something, I believe in doing it right,” he said.

Davis, who is 87 years old, has served on a lot of committees, including the Helena Jaycees, when they were in existence, the Helena Elks Club and the Helena Lions Club.

“I tell you, it’s worth it,” he said of his volunteerism. “For every dollar, you get back three times over, by helping your community.”

The 60th anniversary of the Last Chance Stampede and Fair takes place July 28-31.

For more information or to purchase tickets, visit the fairground’s website at www.LastChanceStampede.com or call 406.457.8516.