Amanda Jenkins Legge grew up in Gilbert Arizona, riding horses, running track, showing in 4-H and AQHA, along with NBHA barrel racing and High School Rodeo. She was the 2000 Arizona High School Rodeo Queen and competed in the AQHA Youth World competitiontwice in speed events. In 2006 Amanda was blessed to become Miss Rodeo America, winning the coveted Horsemanship award. She felt honored to serve her rodeo community all over our great country, from New York City to California, but one of her best-loved memories was carrying the American flag at her hometown rodeo in Payson Arizona. After her reign as Miss Rodeo America Amanda finished her bachelor’s degree from Arizona State University in Interdisciplinary Studies focusing on Mass Communication and Education. She worked in sales for W.F. Young and Veterinary Services, INC, before returning to school to get her teaching certificate and she spent several years teaching 4rd& 5thgrades.Amanda has always loved being an educator, influencing young minds and she looks forward to finding her way back in the future, however her current focus is on her family. She and her husband Matt, reside in Mesa Arizona and are raising three boys, Weston 6, Bode almost 2 and Kash almost 1.

Karl Stressman, who resides in Weatherford, Texas with his wife Allie,is a longtime friend of the Miss Rodeo America, Inc. organization. Karl, an Arizona native,grew up in Tucson and graduated from the University of Arizonawhere he studied art. During his career he has held several positions within the western and rodeo industry. He was the Director of Event Marketing for the Wrangler Jean Company for 12 years. During this time with Wrangler, he made his home in Greensboro, North Carolina. It was duringhis tenure with Wrangler that he had his first association with the Miss Rodeo America, Inc. organization,as members of the Executive Board and the reigning Miss Rodeo America traveled to Greensboro each year to visit Wrangler headquarters. After leavingWrangler he began a newjob as the Commissioner of the Professional Rodeo Cowboys Association. At this time, he and Allie packed up their horses and made their home in Colorado Springs, Colorado. As Commissioner he gave the keynote speech each year at theMRA Pageant’s PRCA luncheon. He remained in thepositionof PRCA Commissioneruntil his retirement in 2017.They then moved back to their home state of Arizona. Karl ended his brief retirement and became President of the United States Team Roping Championships. He re-retired in 2020and anotherbigmove, this time to Texas. Karl and Allie have eight children and nine grandchildren with twomore on the way. Karl remains an active member of the USTRC and the STRA of Texas. Karl loves a good team roping horse, roping, and playing golf. He and Allie enjoy spending time with their family and friends. 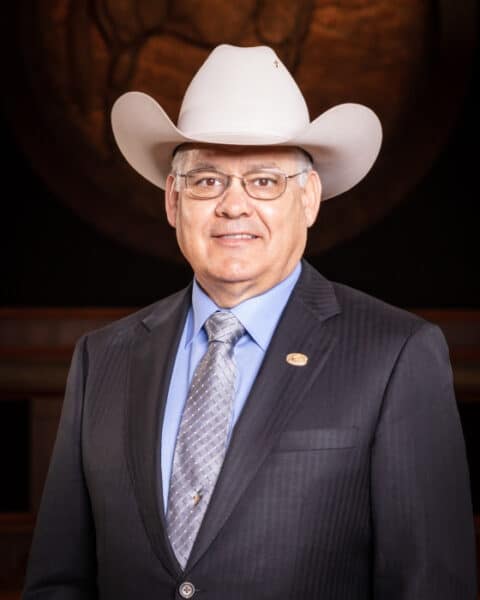 James “Jim” Hunt of Faith, South Dakota, is an AQHA life member and has been an AQHA director since 2013. Hunt has served on the Ranching Council, Studbook and Registration Committee, Animal Welfare Commission and Hall of Fame Selection Committee. He has also served on the governance and microchipping task forces. Hunt was the chairman of the Ranching Committee. He also spearheaded developing the AQHA Ranching Heritage Breeder Young Horse Development Program and has personally donated more than 50 foals from his breeding program to this AQHYA program.Hunt graduated from South Dakota State University with a bachelor’s degree in agricultural business and worked for Hulett National Bank in Wyoming as a loan officer and then vice president. He competed as a Professional Rodeo Cowboys Association saddle bronc rider, was the event director in the South Dakota Rodeo and Northwest Ranch Cowboy’s associations and was captain of the South Dakota State University College Rodeo Team. Hunt was also an agricultural reporter for radio station KLSC in Watertown, South Dakota. Hunt currently owns and operates Open Box Rafter Ranch, a working cattle and horse operation that has produced its own annual Quarter Horse production sale since 1994. He is an AQHA 30-year breeder and has bred more than 1,000 registered American Quarter Horses, including an AQHA Champion, Superior, Performance Register of Merit horses, World Show and Wrangler National Finals Rodeo qualifiers.He earned the 2009 Sunshine Bible Academy Distinguished Alumnus Award, was named the 2011 Black Hills Stockman of the Year and received the 2020 Black Hills Stock Show Pioneer Award.Hunt has also served on the Rushmore Plaza Expansion Project Design Committee, Central States Fair Board of Directors, Black Hills Stock Show Horse Committee, Black Hills Stock Show Foundation Board, Sunshine Bible Academy School Board, SBA Foundation Board, Bethel Free Lutheran Church deacon and South Dakota Quarter Horse Association Board of Directors.Hunt and his wife, Joni, have seven children, all of whom are involved in the family ranching operation: oldest son J. Tom and wife Sage, who have 2 1/2-year-old twin girls and 6-month-old boy and girl twins; daughters Jessica and Jimmie Jean; son Justin and wife Erica, and sons Joshua, Jordan and Jeb. 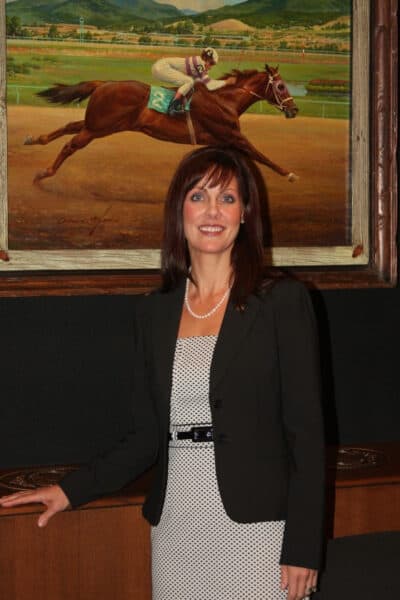 Raised on a horse and cattle ranch in Idaho, Laina Banks has been involved in ranching, American Quarter Horse racing and showing her entire life. Her love for the western lifestyle is deep and evident in every aspect of her life. Laina and her husband Ken reside at Banks Ranch in Schulenburg Texas where they breed and raise American Quarter Horses and a run a successful cow/calf cattle operation. They are passionate about producing quality individuals in both programs and work hard to preservethe agricultural and livestock industry and to help insure the future. On a professional level Laina enjoyed a successful career in people and sales management. She has managed department stores for Macy’s and served as a regional manager for Estée Lauder companies. Currently Laina is intimately involved with the programs at Banks ranch and oversees the horse breeding and show programs. An avid competitor, Laina has showed American Quarter Horses on a national level since she was a child. She has been successful in multiple disciplines and recognized with numerous World Champion titles to include her most recent the 2020 AQHA World Champion Select Amateur Western Riding and the Reserve World Champion Select Amateur Horsemanship. Laina is passionate about giving back and has found many avenues for service. She has acted in a leadership capacity within AQHA in her role as the National Youth President and more recently as the Chair of the American Quarter HorseFoundation. She is a national AQHA director and active onmultiple committees. Laina also serves on several other industry boards including the National Snaffle Bit Association, Texas Quarter Horse Association, Texas A&M Equine Initiative, and the National Cowgirl Hall of Fame.