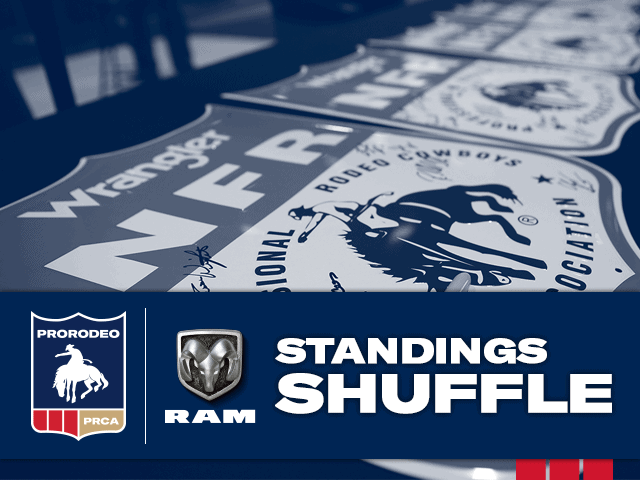 The ProRodeo Tour is in its final countdown of the season, and cowboys were racing last week to earn as many points for the Tour and as many dollars toward the PRCA | RAM World Standings as possible before the regular season ends Sept. 30.

From Aug. 10-16, ProRodeo athletes competed at nine competitions worth a collective $538,886, helping 28 cowboys improve their positions within the Top 15 of their respective events.

Cowboys know it’s easier to maintain a position at the top than it is to play catch-up when trying to qualify for the Wrangler National Finals Rodeo. Every dollar counts, and making the Top 15 in the world standings during the summer run establishes a solid base and builds a cowboy’s confidence as the final month approaches.

Nobody knows this better than tie-down roper Marty Yates, who jumped six spots last week, going from 13th to seventh, thanks in part to winning the Wyoming State Fair & Rodeo in Douglas for $1,767.

Yates is a six-time qualifier for the NFR (2014-19) with more than $1.19 million in career earnings since his rookie year in 2013. The Texas cowboy celebrated his 26th birthday during Cowboy Christmas, but his biggest haul came in the middle of August.

With the Guymon (Okla.) Pioneer Days Rodeo and the Annual World’s Oldest Continuous Rodeo in Payson, Ariz., this week, big jumps like Yates’ could happen again.

Other cowboys to improve their position within the Top 15 last week include:

Cowboys on the bubble for a spot in the Top 15 can find themselves a few dollars short of qualifying for the Wrangler NFR. With six weeks left between now and the end of the 2020 season, it’s noteworthy to see who is on the cusp of breaking into the Top 15.

More changes in the world standings are likely in the coming week, particularly for those competing in Guymon. Fans can catch the rodeo action in Guymon and Payson on the PRCA on the Cowboy Channel Plus App.

The outcome of the Guymon rodeo, and the rest, are sure to make an impact on the world standings and possibly on who will qualify for the 2020 Wrangler NFR and 2020 Clem McSpadden National Finals Steer Roping.