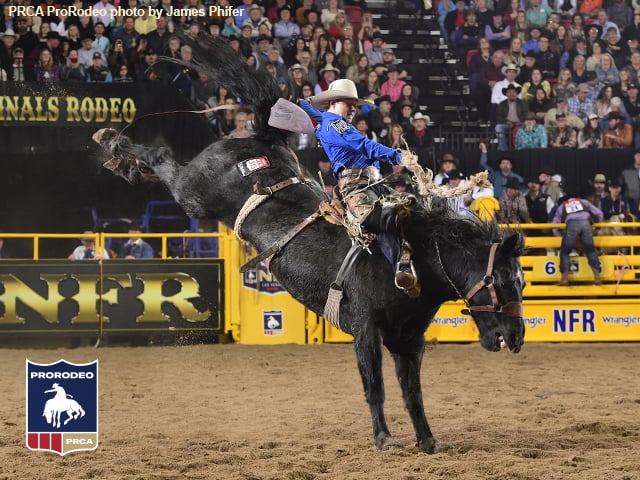 Hay, who made his debut at the 2019 Wrangler National Finals Rodeo, finishing seventh in the world standings, has been out of action since suffering a skull fracture in Belle Fourche, S.D., July 3.

“I saw a specialist in Los Angeles (Tuesday morning), and he said it would be OK for me to get on (Wednesday) and see how it goes,” said Hay, 22. “I’m going to play it by ear a little bit. If I feel good after Wednesday, I’ll keep on going. If not, maybe I’ll have to take some more time off. I’ll find out (Wednesday).”

Hay suffered a subdural hematoma and a fractured skull at the Black Hills Roundup after getting bucked off Powder River Rodeo’s Glass Heart.

A subdural hematoma is a type of bleeding in which a collection of blood – usually associated with a traumatic brain injury – gathers between the inner layer of the dura mater and the arachnoid mater of the meninges surrounding the brain.

At Tremonton, Hay has drawn a familiar horse, Big Bend Rodeo’s Spotted Blues. Hay had an 83-point ride on Spotted Blues in Round 1 of last year’s NFR.

“I couldn’t really ask for a nicer one to start on,” Hay said. “That’s a really good horse. I’m pretty excited. I was trying not to get my hopes up too much before I talked to the (specialist) this morning. After I talked to him, I got excited.”

If things go well for Hay in Tremonton, he will compete at the Xtreme Broncs Tour Finale in Rapid City, S.D., Aug. 27.

“I want to just get on, do my thing and ride the best I can,” Hay said. “I don’t like to pay too much attention to the standings too much anyway. I will just play it by ear and hopefully I end up at the NFR.”

Hay’s big payday this season came Feb. 8 when he won the Fort Worth (Texas) Stock Show & Rodeo and departed town with $23,080.