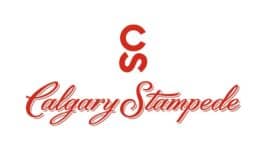 “It just doesn’t get any better than this – it’s a dream of a lifetime.”

Team cattle penning is a show of athleticism and skills as horse and rider square off against the herd instincts of cattle.

The fast-paced event gives a team of three riders on horseback 60 seconds to separate three specifically identified cattle from a herd of 30 and get them into a 20’ x 24’ pen at the opposite end of the arena. Teamwork is the key to success with all three riders working in harmony to cut out the correct cattle and drive them to the pen.

The Calgary Stampede Team Cattle Penning Championships features teams vying for championship buckles in four different classes, each determined by the skill and experience of the competitors. The Open Class showcases the best of the best and competition was fierce amongst the 20 teams.

“It’s feels awesome,” Brown said as he choked back tears. “We’ve been coming to the Stampede for quite a few years now. We were finally able to talk Harv into coming with us and we’ve been chasing this Open buckle for a long time. It just feels really good.”

Bruneau credits the team’s success to hard work a deep-rooted trust in each other.

Penner tips his hat to the hard-working horses on the team.

“This is JD for John Deere, and the reason for that is because every time you drive a John Deere you get a smile on your face, just like when you ride this horse.”