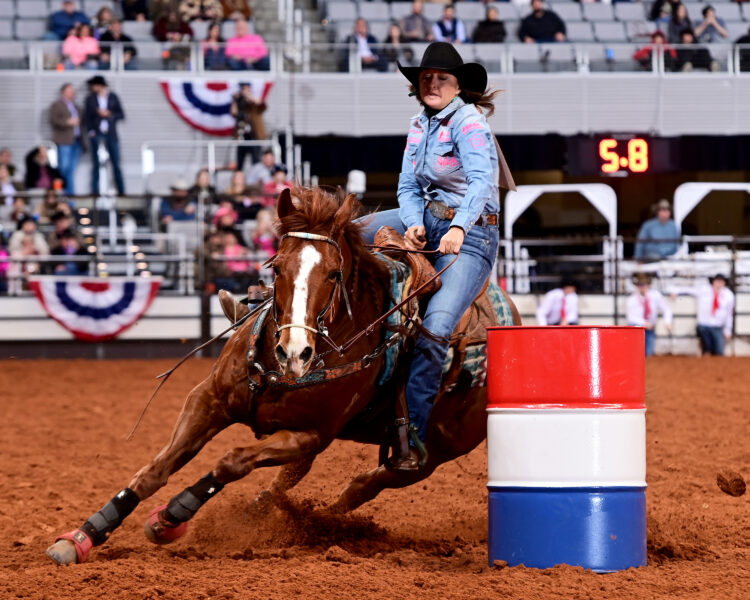 Jordon Briggs, the 2021 World Champion Barrel Racer from Tolar, Texas, notched her first big win in pro rodeos at the Fort Worth Stock Show & Rodeo (FWSSR) in 2009 at Will Rogers Coliseum. She began her quest for another signature square buckle Tuesday when she won round one of bracket 3 at the FWSSR Pro Rodeo Tournament in Dickies Arena with a 16.58-second run. Briggs won the Texas Champions Challenge and $10,000 last Thursday here. FWSSR photo by James Phifer

FORT WORTH, Texas — Five performances of the ProRodeo Tournament are now complete at the Fort Worth Stock Show & Rodeo (FWSSR).

Round 1 of Bracket 3 got underway in Dickies Arena on Tuesday night with Jordon Briggs of Tolar, Texas, atop the leaderboard. Riding her amazing horse Famous Lil Jet “Rollo,” she added $1,760 to her checking account after she rounded the cloverleaf pattern in 16.58 seconds. Back in 2009 Briggs won her first big rodeo here and was wearing her signature, square Fort Worth champion’s buckle on Tuesday.

Briggs and Rollo will make their second appearance here on Wednesday night. If they are among the top two money earners in Bracket 3, she will advance to the Semifinals. She is among some very tough competitors in this bracket. Of the eight members of the Women’s Professional Rodeo Association (WPRA) on Tuesday’s roster, the fastest times were the last four gunners in the pen.

Molly Otto, from Grand Forks, North Dakota, ran before Briggs and set the pace at 16.72. Then it was Briggs turn. Lisa Lockhart from Oelrichs, South Dakota was just behind Briggs at 16.60 and finished second. The final barrel racer was a college rodeo athlete, Taycie Matthews from Wynne, Arkansas.

Matthews has qualified for the College National Finals Rodeo twice representing East Mississippi Community College. She has transferred to the University of West Alabama and is pursuing her bachelor’s degree in business administration and trying to qualify for her first Wrangler National Finals Rodeo (WNFR). She finished in third place on Tuesday with a 16.66 and will be the first runner on Wednesday night. 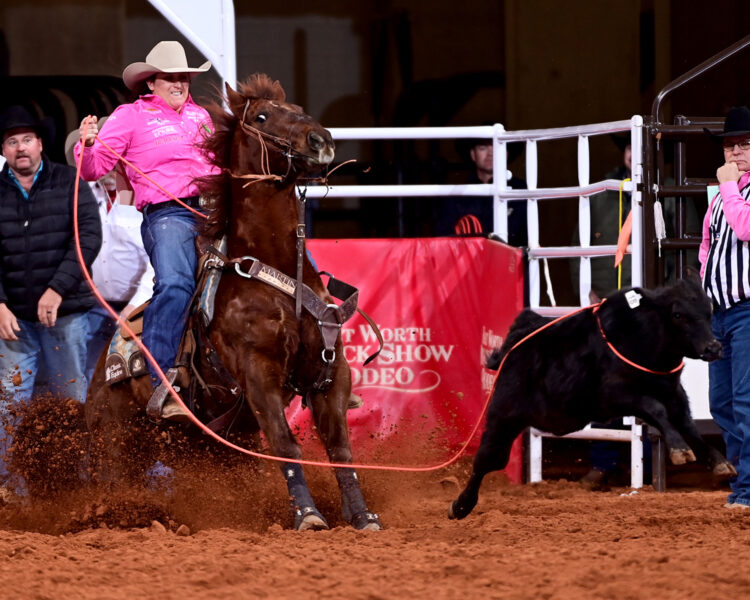 Kelsey Domer of Cisco, Texas, the reigning breakaway roping champion of the Fort Worth Stock Show & Rodeo’s ProRodeo Tournament, began her quest for back-to-back titles by winning round one of bracket 3 on Tuesday. Domer has a new fan this year as she and her husband welcomed a new daughter in August. FWSSR photo by James Phifer

Another WPRA member and reigning Fort Worth champion that was successful on Tuesday was Kelsie Domer from Dublin, Texas. Domer finished the 2022 season 20th in the breakaway roping world championship standings. After winning the title here, she kept competing for a while, then took time off to give birth to her and husband Ryan’s first child last August. Now going to rodeos is a family affair for the Domers. 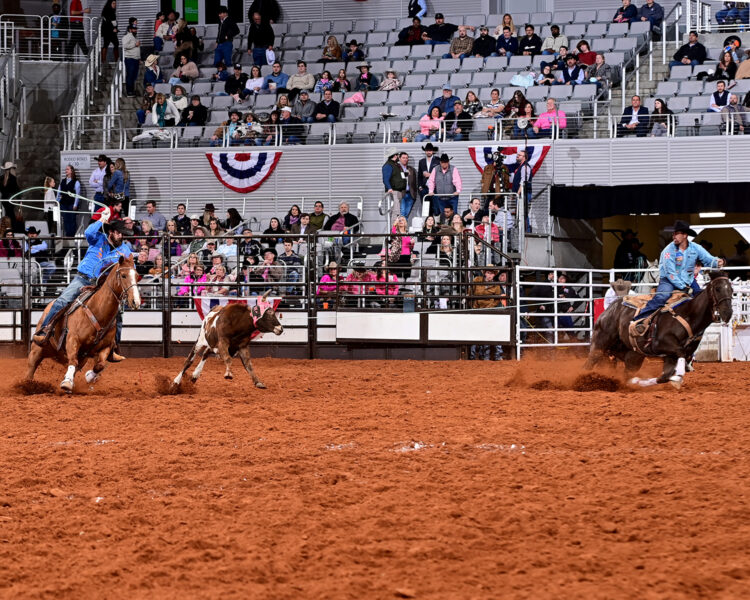 Rhen Richard of Roosevelt, Utah, and Jeremy Buhler of Arrowwood, Alberta, took the team roping lead in bracket 3 of the Fort Worth Stock Show & Rodeo with a 4.6-second run. The duo finished ninth in the world championship standings last year and advancing to through the tournament and winning the finals on February 4 would give them an early-season boost in the 2023 standings. FWSSR photo by James Phifer

The team ropers at the top of the board on Tuesday are no strangers to winning. Rhen Richard from Roosevelt, Utah and Jeremy Buhler from Arrowwood, Alberta, Canada, stopped the clock in 4.6 seconds. After finishing third here last year, they are hoping to do even better this year. That will depend on their performance on Wednesday.

Action starts at 7:30 p.m. at Dickies Arena where Bracket 3 will be completed.

FORT WORTH, Texas – The following are unofficial results from the Fort Worth Stock Show & Rodeo’s Pro Rodeo Tournament, January 24, 2023.