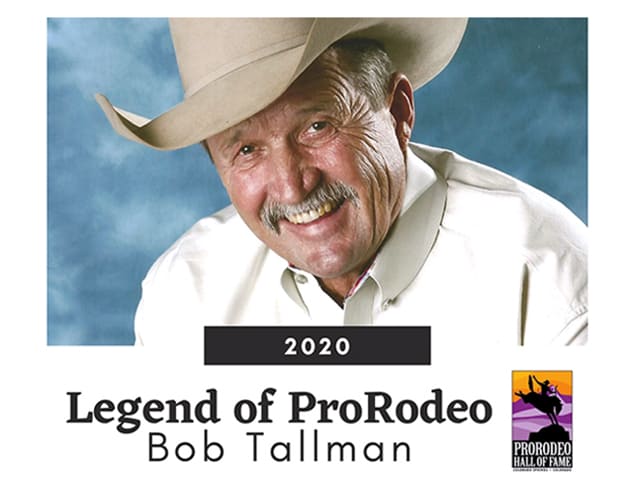 ProRodeo Hall of Fame announcer Bob Tallman has been named the 2020 Legend of ProRodeo.

Tallman will be honored at the Wrangler Gold Buckle Gala on Nov. 30 at Billy Bob’s Texas in Fort Worth.

“I’ve been the host of the Legend of ProRodeo event three or four times, and I asked (ProRodeo Hall of Fame director) Kent Sturman, ‘Is there somebody older than me who might not be in good health that is more deserving?’” Tallman said. “I have been so over awarded in 50 years, and in one week I got the call to work the (2020 Wrangler National Finals Rodeo), then I passed my real estate test and then I got a call from Kent Sturman. It was a Triple Crown week.

During a career that has spanned more than five decades, Tallman has announced more than 15,000 rodeo performances in the U.S., Mexico, Canada, Australia and New Zealand.

Tallman’s gravel-laced baritone and story-telling prowess are legendary in ProRodeo. In 2020, Tallman will work his record 26th NFR at Globe Life Field in Arlington, Texas, Dec. 3-12. Tallman was named the 2019 PRCA Announcer of the Year for the 10th time and was inducted into the ProRodeo Hall of Fame in 2004.

“When you think of legends in professional rodeo, Bob Tallman has to come to mind,” Sturman said. “He is one of the best rodeo announcers of all time. He is a wealth of information and stories. He has seen it all in our sport and has worked tirelessly to inform the fans, give back to our industry and help to make the sport better than when he started. He was an obvious choice for the 2020 Legend of ProRodeo.”

Born Oct. 25, 1947, in Winnemucca, Nev., Tallman tried his hand as a rodeo competitor, but he quickly discovered his forte was behind a microphone, as evidenced by his first PRCA Announcer of the Year Award in 1982.

Tallman’s career began in Fallon, Nev., when he told a rodeo producer he thought he could do a better job than the announcer was doing. The producer told him to give it a try. Tallman earned $100 for that first job and has never looked back.

“This (Legend of ProRodeo honor) was never on my radar,” Tallman said. “Any time you try in life to set yourself up for things like this, God doesn’t like that. It’s co-mingling the truth and honesty with something that’s going to bite you. I didn’t have a clue about this award. I want to give everyone else within the vicinity of that reception hope that they would be able to be standing in that same spotlight.

“The toughest part of accepting an award this prestigious is to walk away from there gracefully and let people want to walk in your path with them.”

The Wrangler Gold Buckle Gala will include a reception at 6 p.m. (CT), followed by a 7 p.m. dinner with live auction and program. Entertainment will be provided by musical artist Paul Bogart.