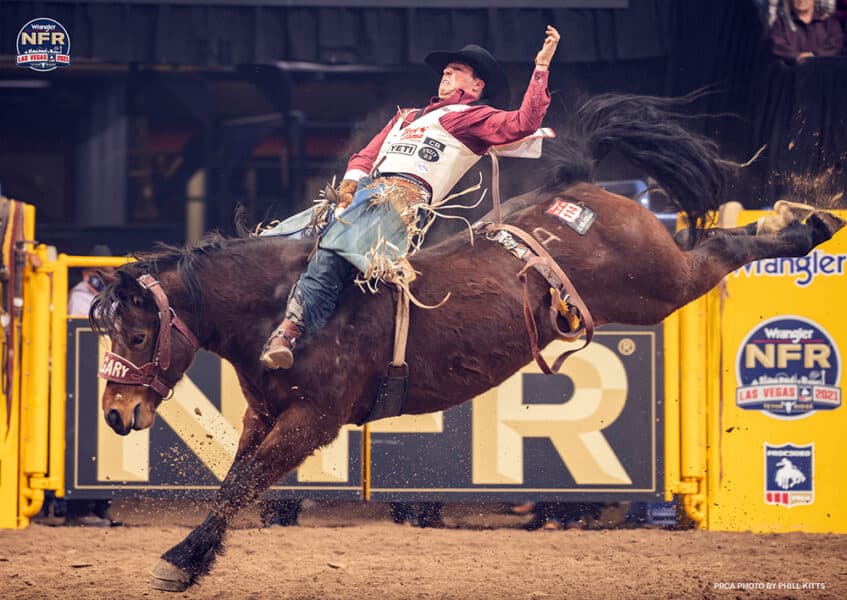 Richmond Champion rides Calgary Stampede’s Arbitrator Joe for 86 points to finish in a tie for third place during Sunday’s fourth round of the Wrangler National Finals Rodeo.
(PRCA PRORODEO PHOTO BY PHILLIP KITTS)

LAS VEGAS – The competition is often brilliant at the Wrangler National Finals Rodeo, which offers a purse of more than $10 million spread over 10 December night.

“We are winning money,” Champion said with a smile. “I don’t care if we have to split it 13 ways; I’ll take it. There wasn’t much gap from first to third, so it doesn’t change the average much. I’m feeling good. I’m just building on it.”

Of course, having a good horse is a big part of each ride. Judges mark half the score on how well the animal performs, and the other half is marked by how well the cowboy spurs the horse from its neck to his rigging while in rhythm with the animal’s bucking motion. Arbitrator Joe fit the bill well.

“I’ve seen him a lot,” Champion said. “Tim (O’Connell) beat me this summer in Calgary (Alberta) on him, and he was 90. I knew it was a big opportunity, especially in this round. All the horses were really nice, but you needed to have something that has a little more to them. There were five or six that really did, and I was happy to have one of them.”

“I feel great now,” Champion said. “I’ve had a good warm-up, and then I’ll get on another bucking horse. We are on the backside of it now. Come Round 10, I’ll be ready for 10 more.

“You can work out all you want, but if you’re not getting on bucking horse every day, there’s no way you can work yourself out this way. I’m just getting b ack into riding shape. I think I’m right on the verge of that, and my confidence is through the roof. I’m just excited to have it rolling early.”