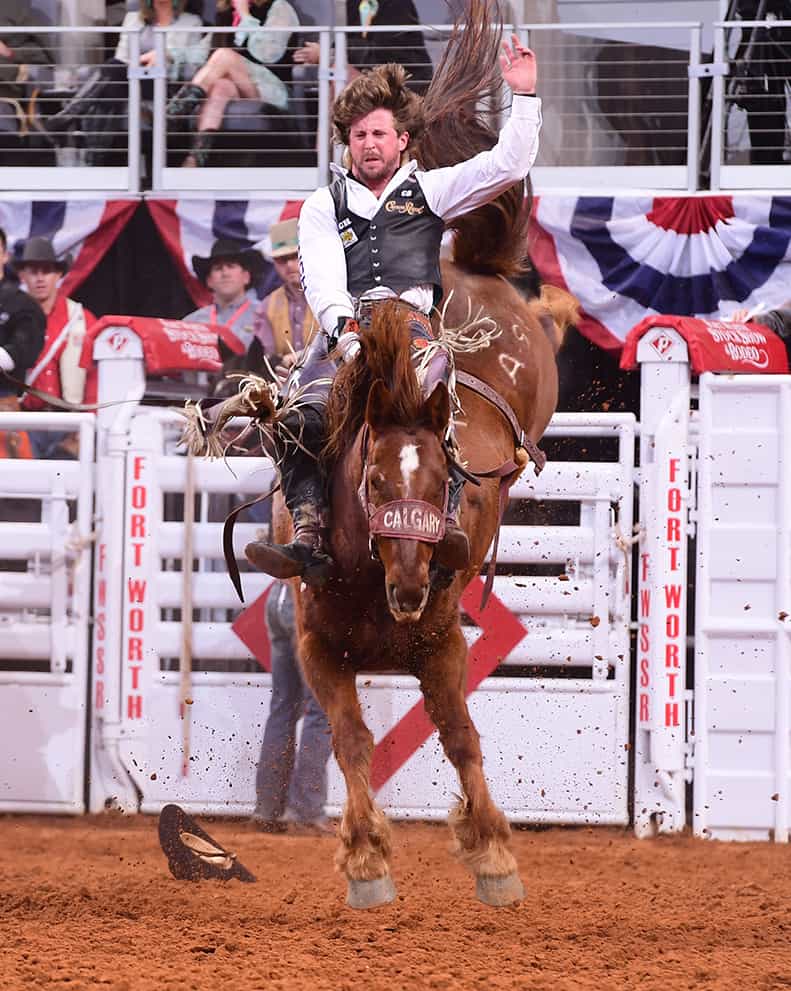 He won $20,000 in the championship round and nearly $25,000 in the 16-day rodeo tournament. Rodeo fans can catch Hooper on the television series “Yellowstone” in the upcoming season.

Jacob Talley of Keatchie, Louisiana, wrestled his steer to the ground in four seconds flat for his $20,000 paycheck. The two-time Wrangler National Finals Rodeo (WNFR) qualifier’s early season has started well. He won a total of $26,640 here and is currently in the money at San Angelo and Jackson, Mississippi. 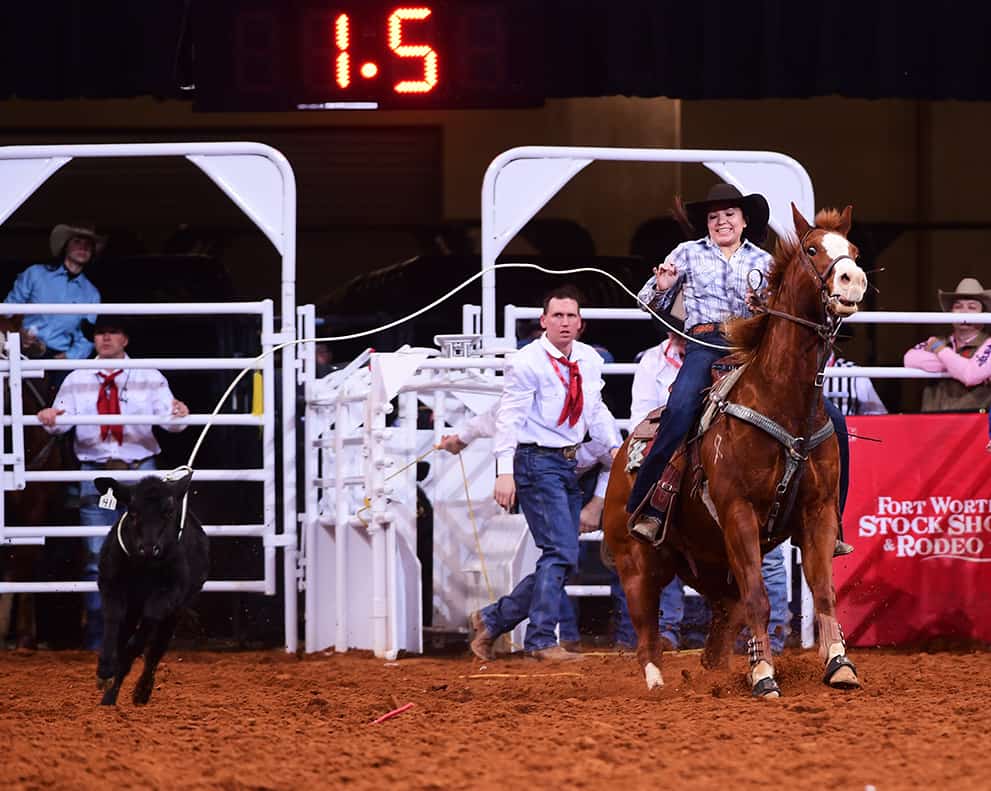 Utah’s Cassie Bahe won the first breakaway roping championship at Fort Worth with a time of 2.3-seconds. She won $20,000 and her younger sister Anna placed fourth and won $4,000 at the championship finals February 8. FWSSR photo by James Phifer

One of the biggest money-earning athletes at Fort Worth was a 13-year-old horse named Roy. Sisters Cassie and Anna Bahe from Grantsville, Utah, and their family raised Roy, who was born on their grandparents’ ranch in Gooding, Idaho, from his days as a colt. Both women rode him here in the breakaway roping and both competed in the finals.

Cassie was the first breakaway roper to ride into the box and she set the pace with 2.3 seconds. Two runs came close to moving her down a notch, but Wyoming’s Shai Schaefer (2.0) and Texan Jordan Jo Fabrizio (2.1) both were penalized 10 seconds for failing to give the calf the proper head start. Cassie won $20,000 for first place and Anna finished fourth, earning $4,000. Roy carried them to $33,120 in total earnings and put Cassie in the history books as the FWSSR’s first rodeo breakaway roping champion.

Saddle bronc rider Dawson Hay thought his chance at a championship here was gone, but he moved into the final field after another cowboy could not compete. He made the most of his newfound opportunity, tying the Fort Worth rodeo record set by world champion Cody Wright in 2011. The Wildwood, Alberta, cowboy scored 91 points on a Canadian horse – Calgary Stampede’s Zena Warrior.

Tyler Milligan of Pawhuska, Oklahoma, set a quick early pace in the tie-down roping that earned him a championship. The NFR cowboy stopped the clock in 8.4 seconds riding Big Time, the two-time tie-down roping horse of the year.

Milligan, who competed in his first NFR last year, had to watch a tough field of NFR veterans attempt to beat his time before knowing the championship was his.

The most unique winners this year were the team roping duo of Clay Ullery and Jake Edwards. Ullery, from Valleyview, Alberta, and Edwards, a New York native who rodeos from Ocala, Florida, both qualified for the FWSSR ProRodeo Tournament based on their 2019 season accomplishments, but neither of their usual partners made the cut.

The two relied on the professional rodeo entry system, called PROCOM, to find them a partner. They met for the first time at Dickies Arena just before the evening performance on Saturday, February 1, and roped together for the first time then. After finishing fourth that night, the pair won the Sunday, February 2, round and punched their semi-final ticket. The finals was their fourth time to rope together and they have earned a paycheck every time.

In the finals Ullery and Edwards were the first team to compete and set the pace with 4.9 seconds. The closest anyone was able to get was a 5.1 by reigning world champion header Clay Smith and three-time world champion heeler Jade Corkhill.

Two-time world champion barrel racer Hailey Kinsel won the championship at the FWSSR in 2019, the last year the rodeo was held in historic Will Rogers Coliseum. She was back in 2020 in a new arena and with a new last name after she and Professional Bull Riders world champion Jess Lockwood married in October.

The result was familiar, as she and her palomino mare DM Sissy Hayday, known as Sister, clocked the fastest time of this year’s rodeo – 16.30 seconds to win the championship. She is the first back-to-back champion in barrel racing at Fort Worth in many years and holds the distinction of winning the last title in Will Rogers Coliseum and the first in Dickies Arena. 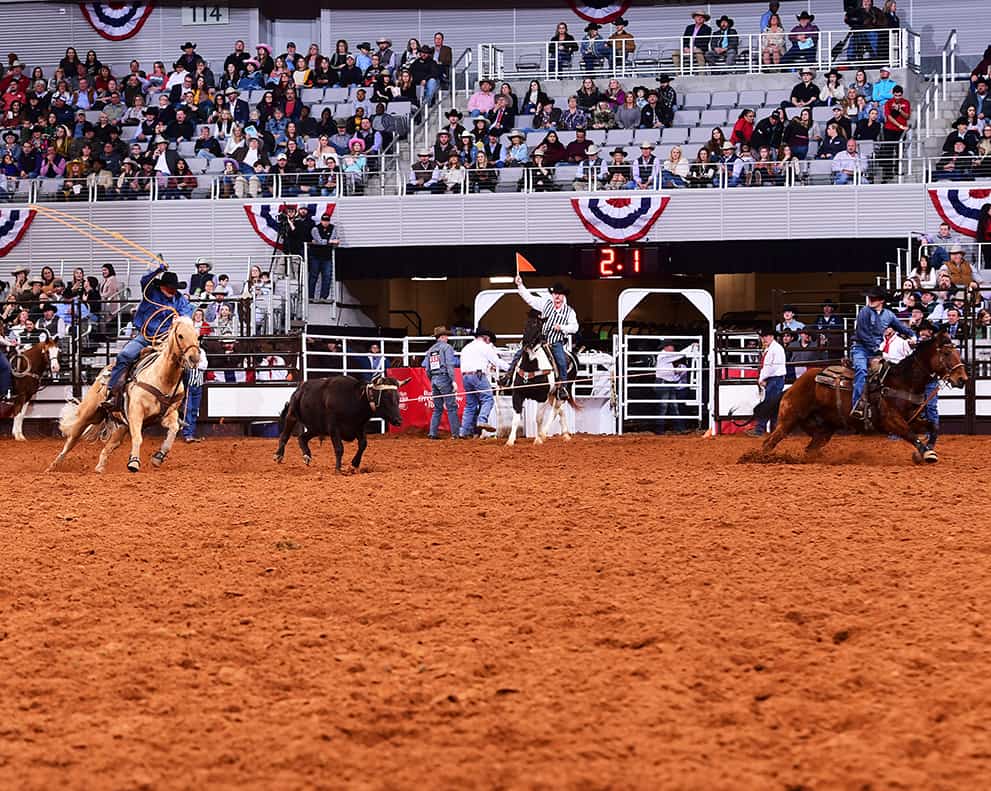 Jimmie Smith of McDade, Texas, finished second – one-hundredth of a second slower with a 16.31. In addition to $12,000 in prize money, Smith also was awarded the $5,000 Jerry Ann Taylor Best-Dressed Cowgirl Award from the National Cowgirl Museum and Hall of Fame.

Brady Portenier of Caldwell, Idaho, was the first bull rider to make a qualified ride in the finals. He won the championship and a total of $24,827 with a score of 90 points on J Bar J Rodeo’s Little Hoot. Portenier has finished among the Top 20 the last three rodeo seasons but has yet to crack into the Top 15 and qualify for the NFR.

The Fort Worth Stock Show & Rodeo will celebrate its 125th anniversary January 15 through February 6, 2021.

The following are unofficial results from the championship round of the FWSSR ProRodeo Tournament at the Fort Worth Stock Show & Rodeo, Saturday, February 8, 2020.