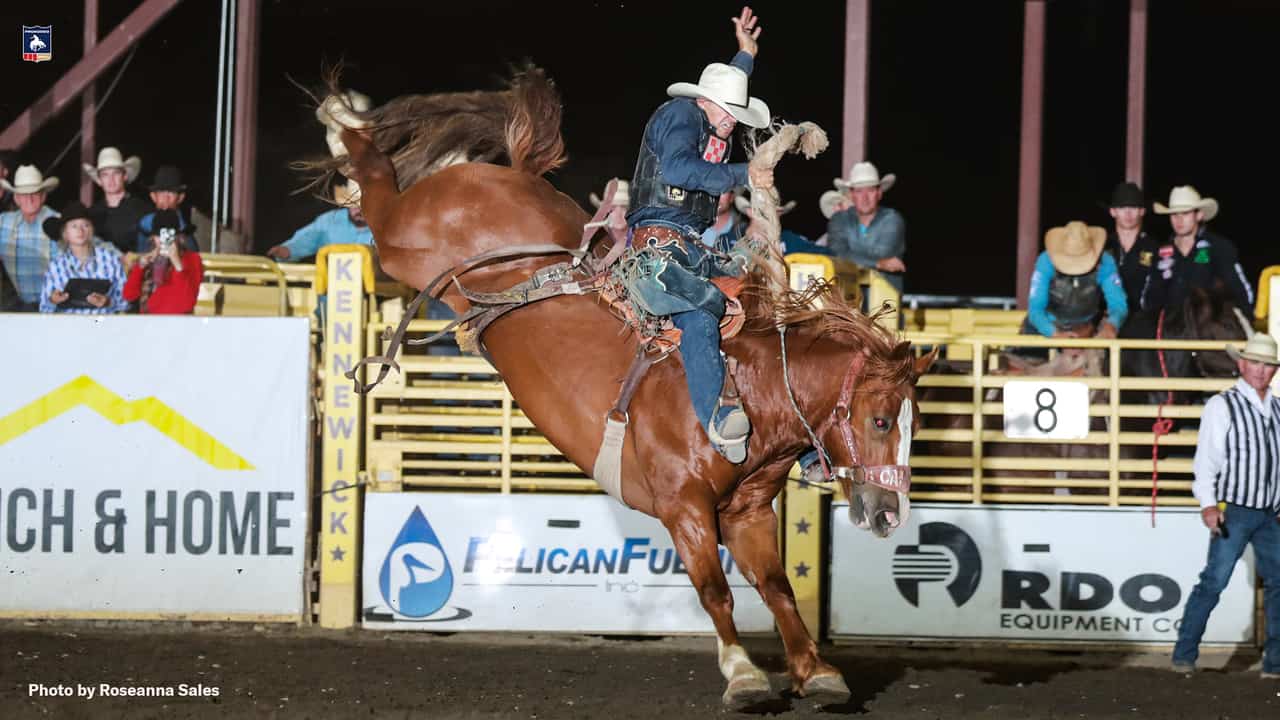 When two veterans get paired up for the first time in the finals at a stop on the ProRodeo Tour presented by Pendleton Whisky, fans can expect some fireworks. That’s just what happened on Aug. 28 when seven-time Wrangler National Finals Rodeo saddle bronc rider Isaac Diaz drew Calgary Stampede’s Wild Cherry at the Horse Heaven / Kennweick (Wash.) Round-Up.

Diaz spurred the infamous bucking horse to 88.5 points to win the final round of the round-up. The ride allowed Diaz to also take the average title with 174 points on two head, earning $5,998.

It was an important win at a crucial time for the Floridian who now calls Desdemona, Texas, home.

The veteran with more than $1.3 million in career earnings is 25th in the PRCA | RAM World Standings with about a month left in the regular season.

The win was set up by a second-place finish in the first round aboard another Calgary Stampede horse, Uvid Bubbles, a ride worth 85.5 points.

The draws were a welcome relief after a relatively dry month.

“I haven’t been on many good ones lately, and so things hadn’t been feeling good,” Diaz said. “It felt good to be back on a bucker.”

His matchup with Wild Cherry, a horse known for putting up big scores but also being tough both inside the chute and out in the arena, was a first.

“She’s not as bad in there as she used to be,” Diaz said, but added he did have to reset his saddle before the ride. “She does this thing, we call it cheese grating, where she runs down the side of the chute, and it will make your saddle run back.”

After resetting things, Diaz used some advice from fellow competitor Kolby Wanchuk on the timing of the nod.

“She was still hard to spur out, but she left more squarely and gave me a good, clean shot out of there,” Diaz said.

After collecting the title, Diaz hit the road, heading to see his family – wife, Britany, and daughter, Whitlee, 2, who spend part of the summer in North Dakota.

“I haven’t seen them in about two and a half weeks, which is probably the longest I’ve been away from them since she was born,” Diaz said. He opted to turn out of his next rodeo to squeeze in the trip. “If I hadn’t turned out, it would end up being over a month … I just needed to recoup a bit.”

As Diaz finishes the season, including the ProRodeo Tour Finale in Salinas, Calif., he’s also embarking on a new career next month – he’ll be an assistant coach for the rodeo program at his alma mater, Tarleton State University.

“Sometimes I would get nervous when in this position because typically, if you don’t make the Finals, fall gets tight,” Diaz said. “But with this new job, things are taken care of.

“I’d love to go back (to the Finals) but you can’t force it. So, I’ll just try to capitalize where I draw good and not get on anything that brings negative vibes. I’ve got a lot of rodeos left. I’m not tapped out.”