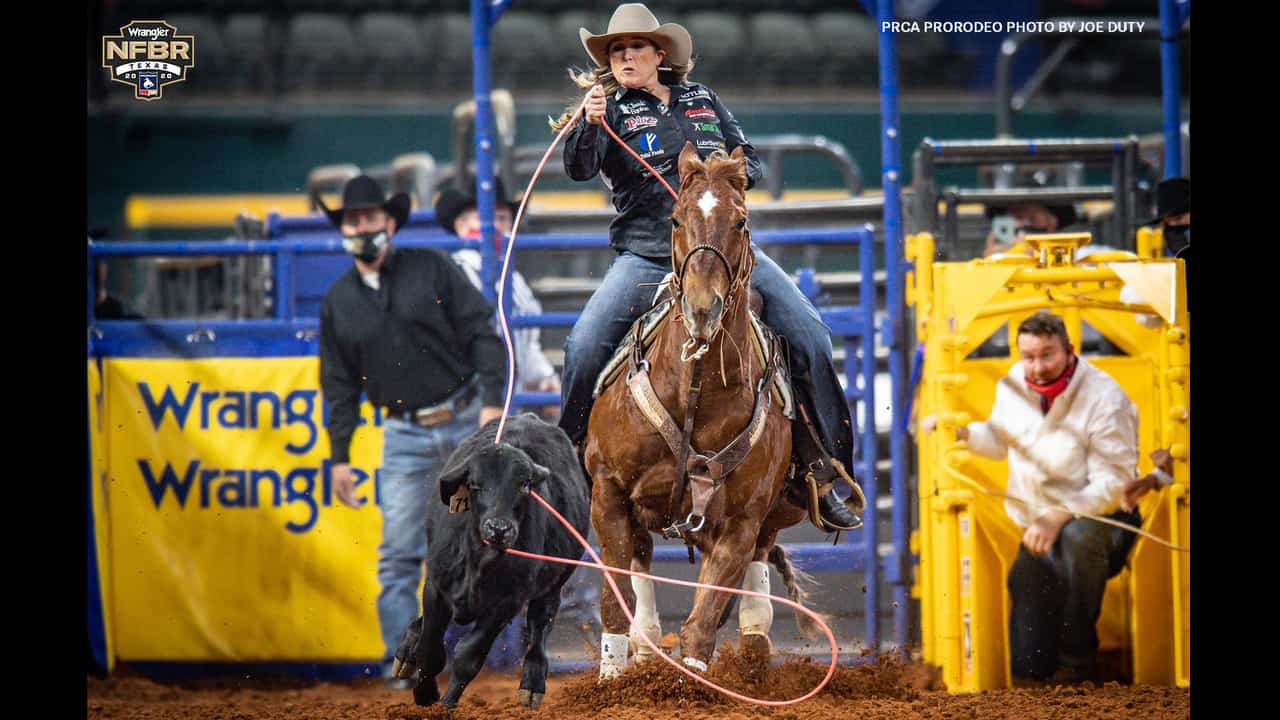 Thanks to taking care of business the third day of the Wrangler NFBR, Crawford finished atop the PRCA | RAM World Standings with $47,185, narrowly holding off runner-up Martha Angelone, who finished with $45,611.

“I don’t even know what my emotions are like right now,” Crawford said. “This is unbelievable. I know that I am not in control of this because this is just way too cool of a ride to be on. It has got to be coming from a higher power, and I hope I can figure out my purpose that God has given me these talents and putting me on this fun ride that I’m on and hopefully that I can fulfill what he has me here for.”

Crawford’s latest victory came down to her last run in the final round. She finished third with an 11.8-second time, but it allowed her to finish third in the average and collect $7,258. Had she placed fourth in the finals she would have collected a $5,337 check and the world championship would have gone to Angelone by $347.

Couple that with Crawford’s Round 9 win (2.0 seconds), second-place finish in Round 10 (2.3 seconds) and splitting the win in the eight-woman semifinals (1.8 seconds) and she was a world champ again.

“I kept talking to everybody (in the final round) and they were like, keep roping your roping, and I know the girls behind me, and I know how good and competitive they are, and I know they are not backing off,” Crawford said. “I told myself today when I came into this, I didn’t win a lot of money (Dec. 9) and backed off a little bit and took myself out on one (a no time in Round 5).

“I knew in these two rounds I had to go at it no matter what because I knew if something happened in that average it would be enough because it was such a tight race. I had to sit back and tell myself, don’t think this through. You have to just go at it and take your muscle memory and do what you do and do what you have done for years and trust in that, and I did.

“It was nerve-wracking because obviously what a big thing this is and will go down in history. Of course, you have nerves, but if you can turn those nerves into positive energy and use them in the right direction it is a good thing.”

“I feel like we are the luckiest people in the world,” Jackie said. “We are truly blessed. I can’t thank everyone behind us: God for giving us our talents and the people who support us our amazing. You try and surround yourself with people who lift you up and push you, and we have the best ones there are.”

Jackie has a stepdaughter, Kaydence, 16. Jackie and Charly also have a son together, Creed, 3. The baby girl, due in March, will be named Journey.
Crawford took a moment to describe the key to her victory – her horse, T’Boy, 15.

“That horse, I can’t even tell you how grateful I am to that horse,” Crawford said, tearing up. “I know he will never know it, but that horse has taken care of me and won with me for 10 years now. Today, we have gone through some struggles and he is 15, is he losing a step, is he this or that. That horse stepped up in a big way these last three days and showed what he has been for 10 years. He worked flawless. I couldn’t ask him to do anything more or take care of me any better.”