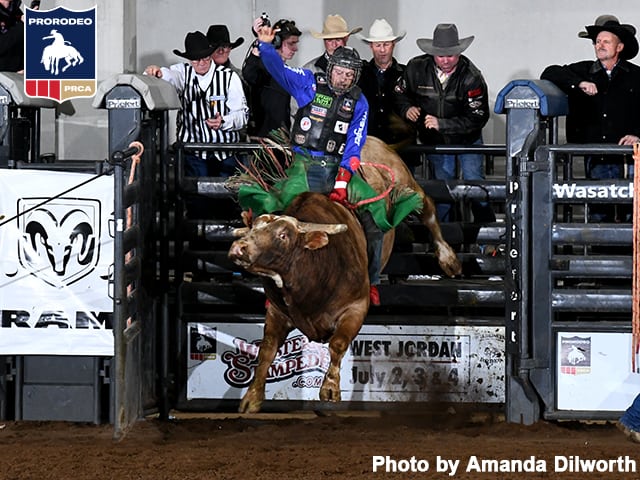 HEBER CITY, Utah — The Pro Rodeo season may slow down as the calendar rolls from October into November, but 2019 Linderman Award winner Josh Frost hasn’t touched the brakes.

The Randlett, Utah, cowboy has not let any moss grow under his feet since the 2019 regular season ended Sept. 30 as he’s preparing for his first trip to the Wrangler National Finals Rodeo in December.

Frost hasn’t entered many PRCA rodeos, but he’s been busy practicing all three of his rodeo events: bull riding, tie down roping and steer wrestling.

“I’ve just been getting on practice bulls, roping quite a bit and going to jackpots, and riding horses a lot (since the end of the regular season),” Frost said. “It felt really good to make three back-to-back rides like that and get the win.”

Frost led the way after Round 2 on Nov. 1 but did not spend the following day resting for the final go. Instead, he roped in an unsanctioned tie-down roping event and competed in another rodeo’s steer wrestling early in the day before heading back to Heber City. Once there, he competed in the tie-down roping before closing the rodeo as the final bull rider to nod his head.

“It was a tough finals and all three of the guys behind me in the average rode their bulls so I knew I had to ride to win,” said Frost who earned $6,530 in Heber City, including a second go round victory. “The pressure was good for me. It was one of the best bull ridings I think we’ve had at the Circuit Finals.”

Reserve champ Shad Winn, a permit holder, had spent the week at Frost’s getting on practice bulls with him.

“It was pretty cool that we both did so well after practicing together this week,” Frost said.

Frost qualified to compete in his third RAM National Circuit Finals Rodeo next spring but first things first, that big trip to Las Vegas and preparing to get on the best bulls in the sport for 10 straight nights. Fortunately, Frost has attended the Wrangler NFR before with his brother Joe, a five-time Wrangler NFR qualifier.

“I talk to him a lot (about how to prepare). He went five times and never had a bad Finals,” Josh Frost said.

“I’ll get back to the gym and get to working out a little bit and I’ll get on at least one practice bull a day …no big-time buckers, but some good jump and kickers,” he said.

It’s advice the brothers first got from three-time Wrangler NFR average winner Denny Flynn, who told Joe he made a mistake by not getting on practice bulls before his first Wrangler NFR.

“He said he got real sore,” Josh Frost said. “The next year, he bought two Angus bulls and got on them about 30 times in November and he won the average that year.”

The strategy has proven effective for Joe, as he’s averaged around $95,000 per year in Wrangler NFR earnings.

“It’s my game plan too. You use the same muscles whether you’re on the rankest bull out there or a nice jump and kicker in the practice pen. Riding some nice practice bulls helps keep your groins, legs, even your arms in shape to ride,” Josh Frost said. “There really is no way to duplicate bull riding from the standpoint of what you ask of your muscles other than to do it.”

But maybe before all that work, Frost will get some rest from a busy weekend in Heber City.

“It was a long day,” he said while unsaddling his tie-down roping horse following the final performance and awards presentations. “But it turned out good.”

For more coverage of the RAM Wilderness Circuit Finals Rodeo, check out the Nov. 15 edition of ProRodeo Sports News.