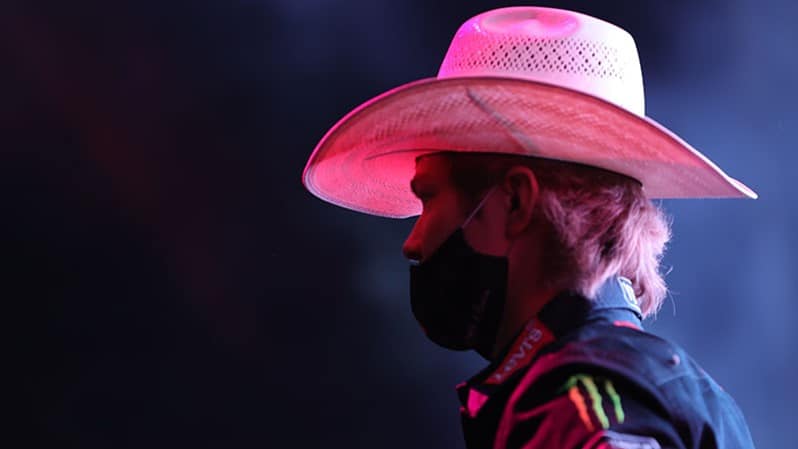 PUEBLO, Colo. – World No. 7 Derek Kolbaba is home resting following a nine-day stint in a Montana hospital after he punctured his lung at the Dusty Gliko Bull Riding Challenge Touring Pro Division event on June 5.

Kolbaba underwent surgery on June 9 to help with blood clotting in his lungs, and he needed the assistance of a chest tube for eight days.

The 25-year-old shared on social media on Tuesday that he was happy to be back home in Walla Walla, Washington, and that he will be out of competition for the next month or two.

The injury was a sour end to an otherwise strong finish to the first half for Kolbaba. Less than 24 hours before Lil Bit Crazy stepped on him, Kolbaba had gone 2-for-2 to win the Kalispell Automotive Group PBR Touring Pro Division event in Montana on June 4.

Kolbaba won two TPD events, including the WCRA Rodeo Corpus Christi, in a one-month span. He also has an automatic berth for the next WCRA Major – the Days of ’47 Cowboys Games & Rodeo on July 20-24. If he were to be cleared in time for Days of ’47, Kolbaba would be attempting to win a second consecutive WCRA Major.

Any rodeo athlete who wins three consecutive WCRA Majors will win the WCRA Triple Crown of Rodeo $1 Million Bonus. Tie-down roper Riley Webb, who is only 17 years old, is attempting to win the $1 million at Days of ’47 as he heads to Salt Lake City with victories at the Stampede at the E and Rodeo Corpus Christi.

Kolbaba, meanwhile, is still in the mix for the 2021 PBR World Championship and its $1 million bonus. He is 709.50 points behind world No. 1 Jose Vitor Leme with the Unleash The Beast now on its summer break.

The UTB resumes its second half on July 26-27 with Last Cowboy Standing at Cheyenne Frontier Days, and there is still plenty of time for Kolbaba to make up that deficit in the second half before the 2021 PBR World Finals on Nov. 3-7.