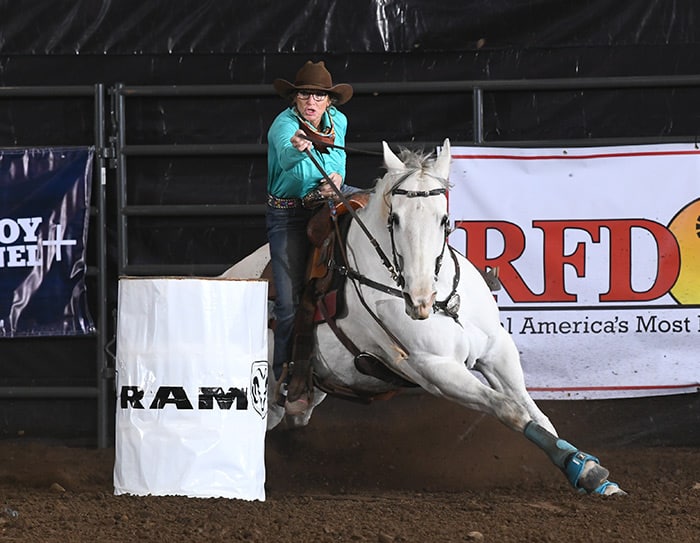 When it comes to the RAM National Circuit Finals Rodeo, Kelly Yates will continue to check things off her list.

She’s been around a bit, first qualifying for the National Finals Rodeo at Oklahoma City’s Myriad Convention Center in 1984. She’s also earned several trips to the national circuit finale since it was established in 1987, though she can’t recall how many times.

What she knows for sure, though, is that she’s competed at virtually every location possible, from Pocatello, Idaho, to the Oklahoma City area for its four years from 2011-14 to its current home in Kissimmee, Florida – she earned her first qualification to Silver Spurs Arena for the 2020 championship, which was moved to Greeley, Colorado, because of COVID-19 restrictions.

“I’ve never competed down in Florida,” said Yates of Pueblo, Colorado. “I would like to make a rodeo or two on the way to get my horses a little more acclimated down there. Mainly, I just want to try to do well when I get there.”

Through all her years of advancing to the race for the national title, she’s never done quite as well as she would like. While many consider a trip to Kissimmee as an opportunity to enjoy a bit of Florida sun maybe take in one of the amusement parks in neighboring Orlando, Florida, Yates is taking this more as a business venture.

“I’ve been to Disney World,” she said. “I guess my main thing is focusing on the circuit finals. It would be different if I had children. I just want to do well, mainly because it counts (for the world standings) this year. That’s a positive note.

“A lot of rodeos have canceled this year, so we’ve got to consider ourselves pretty lucky to have the ones to go to.”

With many events in the Mountain States Circuit (Colorado and Wyoming) shut down in 2020, the only chance Yates had to advance out of the circuit was to compete at the regional finale at the Budweiser Events Center in Loveland, Colorado. Because of COVID restrictions, no fans were allowed.

“I couldn’t really hear, so I just headed out to my trailer after my last run,” said Yates, who placed in the first and third rounds to win the aggregate and pocket $3,252, all of which counts toward the 2021 world standings. “Someone had to come out and tell me I won the average. I was really excited.”

She rode her gray mare, 10-year-old Fiestanozshezfamous, which Yates calls Gucci. She plans to take her 5-year old futurity colt, Shez Might Special, out of her storied mount, Firewater Fiesta, by Dash Ta Fame along the 1,780-mile trek to the RNCFR. Yates also plans to take Playin It Smooth, a sorrel gelding she calls Smoothy.

Through the years, Yates made her mark while traveling across North America. She isn’t afraid to hit the road, but she wants it to be a focused effort. She has a strong legacy in barrel racing and has earned her place among the most elite to have ever played the game.

“That makes me feel awesome, but I am still pretty humble about it,” Yates said. “I don’t think I’m a special person. I’ve worked very hard for what our whole family’s done. If I didn’t like what I’m doing, I have a degree and could do something else, but I love riding horses and love animals. That’s just who I am.”

Deep down, she would love to walk away from Kissimmee with the national crown, something that’s eluded her through the years. Beyond that? She knows how her bread is buttered and will follow the path guided by that meal ticket.

“I have a nice futurity colt, and she just turned 5,” she said. “I’ve got some really nice rodeo horses. Making that finals doesn’t mean that much to me anymore. I just want to go and have fun. I want my futurity colt to come on. She is really nice, and I think she has a big future ahead of her.” 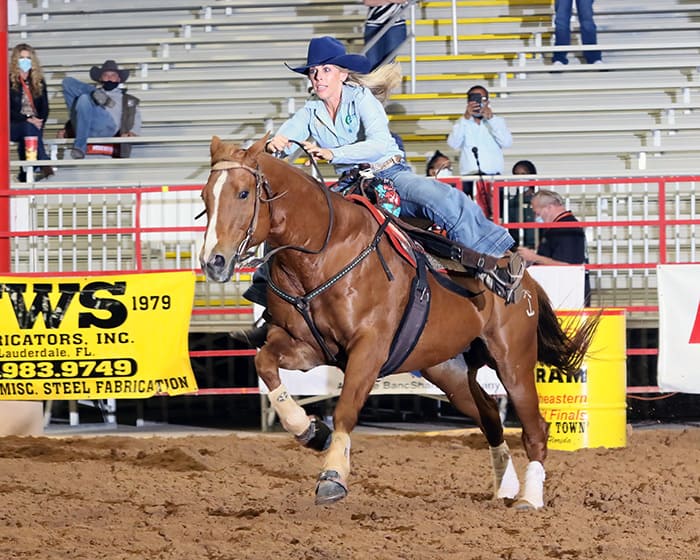 While Yates has an advantage with experience, Margo Crowther has a home-field advantage heading into the national championship. Other than a few years when she was in school at either Vernon (Texas) College or Tarleton State University in Stephenville, Texas, she has lived in Fort Myers, Florida, her entire life.

That’s just about 150 miles from her door to Silver Spurs Arena, and it will be the biggest event in her career. She qualified for the Texas Circuit Finals when she was a student 13 seasons ago and won the average at the 2016 WPRA Finals Card Holder Race; she also was the futurity champion at that year’s WPRA Finals.

“The RNCFR is definitely one of those bucket-list items you want to accomplish as a competitor,” Crowther said. “I was thankful and shocked and surprised. I was excited that my first Southeastern Circuit Finals qualification ended to where I was moving on to the next step.

“I would say it makes me feel more at ease that it’s not that far and that it’s at an arena I run in, especially knowing how my horses work in that pen.”
The horses are Shes Packin Fame, an 8-year-old sorrel mare out of Heidis Dashing Sixes by Carrizzo. She calls the mare Sissy, and the sorrel was a key reason why Crowther finished the 2020 circuit season No. 2 in the standings, behind year-end and average champion Kelly Carrington French.

Crowther and her husband, Casey, also made a nice acquisition last year during the Jud Little Ranch Dispersal Sale. They purchased Chicados Cash, a 16-year-old sorrel stallion out of Chicado Flame by Cash Not Credit – Benette Barrington Little ran the stud at the 2012 NFR.

“I decided to jump on Chicado at the (Southeastern) Circuit Finals,” Crowther said. “I’d only ridden him one time before at an American qualifier, and he qualified third and outran 300 other horses. The next week, I jumped on him in Davie (Florida), and he was just solid. He is the epitome of a rodeo horse.”

They gelled together quickly and for good money. Crowther and Chicado won the opening round, then finished third in the second performance. They finished second in the average and pocketed $6,330.

The good news is she has two excellent horses to have in the stalls in Kissimmee in the race for the national title. Crowther opted for Chicado in Davie, because she understands the limitations of her younger mare; Sissy hasn’t thrived at the Davie Arena.

“Sissy is a phenomenal horse,” Crowther said. “She won me most of my money, but I knew she wasn’t geared up for Davie mentally. Davie has a very narrow alleyway, and it’s an action-packed rodeo with the bulls in the alley. When she can’t see the barrels, she doesn’t love it and sometimes doesn’t perform as well as she can.

“I jumped on Chicado, and I’m glad that I did. I was just so tickled that I chose him. He loves running barrels. He came back stronger in the second-go. I could just tell. He loves being back rodeoing.”

That’s a nice comfort to have as she makes a run for that tough-to-gather national championship.

“It does a lot for my confidence that it’s only three hours from me,” Crowther said. “It’s in my backyard, so that’s a plus, and so is the thought that I have increased my horsepower. Having Chicado, if I run him, I know that he’s been there and done that. I have a shot of doing well. If I can have him and I feeling great, my confidence is going to be even better.”