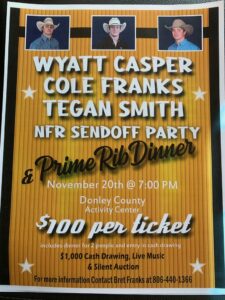 CLARENDON, Texas – The Clarendon College rodeo team has been gaining some incredible momentum over the last few years, and it has only gotten better in 2021.

The proof is in the pudding with three former Bulldog cowboys having earned qualifications to the National Finals Rodeo, the sport’s grand finale that features the top 15 contestants from the regular season in each event.

Leading the way is two-time qualifier Wyatt Casper of Miami, Texas, who finished the 2020 season as the reserve world champion. He became the first national champion in Clarendon history when he won the saddle bronc riding crown in 2016. He will be joined by fellow bronc rider Tegan Smith of Winterset, Iowa, who finished third at the 2019 College National Finals Rodeo; Smith finished the 2021 PRCA regular season in 10th place, one spot behind Casper.

All three will be recognized and honored during an NFR Sendoff Party and Prime Rib Dinner, set for 7 p.m. Saturday, Nov. 20 at the Donley County Activity Center. Tickets are $100 (for two people), and proceeds will go to the Clarendon College rodeo team.

“We will also have live music and a silent auction, so we hope it’s a lot of fun for everyone and gives them a chance to wish our cowboys luck in Las Vegas.”