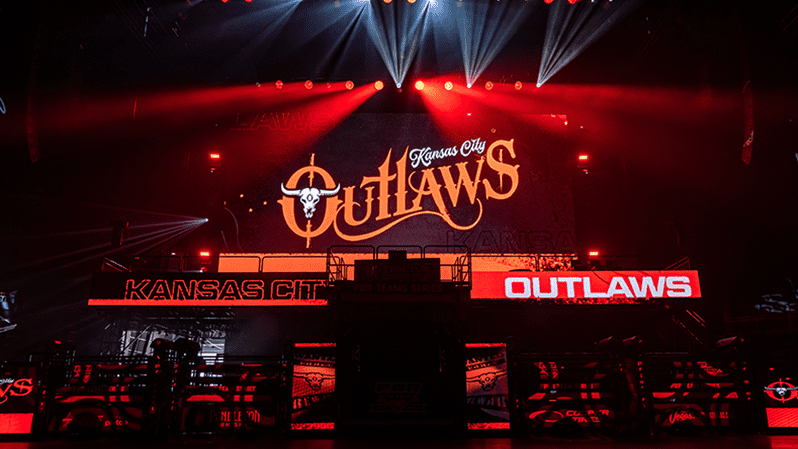 Pueblo, Colo – When the PBR Team Series’ five-on-five bull riding games go into full swing indoors in Kansas City on Aug. 5-7, the sport will look and feel completely different – in a production that is much more dramatic, visually stimulating, easier to follow, better sounding and more intimate.

Both in the arena and on television, the 2022 PBR Team Series in the nine remaining regular season games will be an entirely new, even more engaging experience for fans.

Here are some of the biggest advancements in store for fans:

State-of-the-art theatrical lighting and a new louder yet crystal-clear sound system will electrify the in-arena atmosphere.

Whereas a PBR production used to rely heavily on each venue’s house lighting with modest supplemental lighting, the league will now haul in and set up nearly 300 individual lighting elements – beams, strobes, spotlights, moving head fixtures, fixed and flashing lights and more.

“The arena floor will be dramatically lit, more like a heavyweight title fight than a traditional Western sports event,” said Dan Hickman, head of production for PBR. “The audience’s focus will be drawn to the action on the dirt while the rest of the venue fades off into darkness, and we will now completely control the environment to bring alive different moments during the show.”

For example, the entire arena can now flash in one Team’s colors. 90-point rides can trigger a sensory explosion.

The experience may feel more like Broadway than bull riding, but PBR believes the action and drama of the new series warrants the change.

The main video board that PBR will hang above the chutes for the new bull riding games is much bigger. At 55 feet wide by 30 feet tall, it is double the size of the average New York City apartment in square footage. The main screen is comprised of nearly 5 million individual LEDs.

Additionally, 400 linear feet of reinforced face LED signage will surround the arena, replacing the old-school printed signage tacked to the fences that a rank bull sometimes tore down.

Fans will easily see important information such as team rosters and records, rider vs. bull matchups, leaderboards and statistics, while sponsor messages will pop like never before.

Arena sound systems have been vastly improved, now cranking out 512,000 watts of sound amplification. PBR has invested in state-of-the-art sound reinforcement technology to markedly improve sound levels and clarity everywhere in the arena.

“This new system allows us to dramatically improve sound clarity. People in front don’t have to get their eardrums blasted for the back rows to hear,” Hickman said. “We can also digitally steer sound to keep it away from areas we want to keep quieter, such as the TV booth.”

PBR is the first touring sport to deploy this advanced audio technology, which was developed by a German company specializing in high end concert audio, according to Hickman.

Just as each baseball team has its own dugout and football teams have their own sideline during a game, each bucking chute is exclusively designated to a team during the five-on-five bull riding games.

CBS is embedding television sideline analysts Allen Bestwick and Matt West with each team for the entire five-out game when everyone is together in the same bucking chute.

As fans already saw in Cheyenne, the coaches’ interviews were more spontaneous and in-the-moment – for example, immediately after a big ride or during a coaches’ challenge – than the staged interviews with coaches typically seen in other sports.

Watch for these fresh, spur-of-the-moment interactions to be featured regularly in future broadcasts.

Anyone who has watched PBR on TV versus attending a live event has experienced two realities.

There were two different experiences happening: in-arena announcers telling one story to the fans in the house and a global television broadcast running with a different narrative.

It may have been the same riders on the same bulls, but the presentation was essentially two unique approaches to covering one event.

That presentation of the sport will change with the PBR Team Series.

Television – which will carry every single game throughout the 2022 Teams season – will mirror the live event. The talent heard in the arena will be the same as on television.

Further, the broadcast desk in the CBS TV booth, captained by Kate Harrison, will be located front and center in the middle of the bucking chutes, much closer to the action for added intimacy.

PBR has invested in additional cameras for close-up and action shots. All told, there will be 15 cameras trained on the action.

All PBR Team Series events will be carried on either the CBS Television Network, streamed live on Paramount+, CBS Sports Network, or available via PBR RidePass on Pluto TV.

THE MOST EXTREME PREMIUM and VIP SEATING IN SPORTS

PBR Teams events will offer intimate, high-end partner and premium experiences while putting guests virtually on top of the action.

It’s being billed as a first-of-its-kind offering for any touring sport, while also bringing consistency to the league’s premium packages across all its events.

VIP seating on a new chute deck – a custom engineered structure above the chutes and bull pen featuring high-end VIP furnishings, food and drink reminiscent of a night club lounge – will be located just mere feet from the mayhem on the dirt.

Each team will also have an owners’ box on top of the bucking chutes, and 30 seats will be available for partners and/or fans.

Teams’ arenas will also have 18 dirt suites located in the end zone area on the opposite side of the bucking chutes. Suites will accommodate up to 12 people with food and bar included.

“Our goal for the league and team partners as well as for fans purchasing premium seating is to create and deliver the best sight lines and on-top-of-the-action experience in all of sports,” said Josh Baker, Chief Revenue Officer, PBR.

Even with all these enhancements, the core of the show stays the same: the world’s best bull riders taking on the rankest bull athletes in the most exciting 8 seconds in sports.

By the Numbers: A Brand New Look

• PBR’s largest-ever main video board: 55 feet wide by 30 feet tall and comprised of more than nearly 5 million individual LEDs – in square footage the new video board is double the size of the average NYC apartment.
• Nearly 300 individual lighting elements – beams, strobes, spotlights, moving head fixtures, fixed and flashing lights will dramatically light the arena, making it feel more Broadway than bull riding.
• 400 linear feet of reinforced face LED signage will surround the entire arena, replacing the old-school printed signage tacked to the fences that a rank bull would sometimes tear down.
• 512,000-watts of sound amplification through 56 line array speakers and 8 subwoofers.
• 15 semi-trucks bring PBR’s equipment to each venue (not counting trailers and trucks to bring in an average of 90 bulls to each 3-day homestand as well as 750 tons of dirt).
• 30 seats on a new deck above the bucking chutes will put VIP guests virtually on top of the action.
• 18 Dirt Suites will be located in the end zone area opposite the bucking chutes.