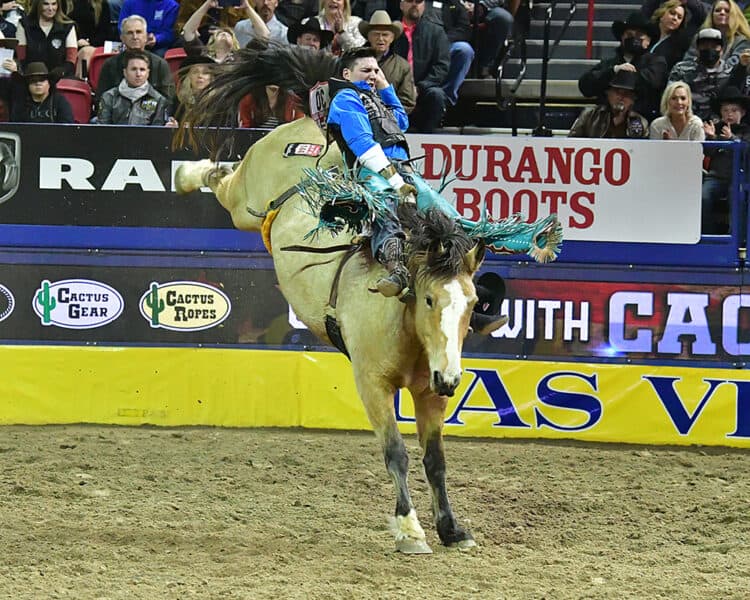 LAS VEGAS – For the second straight year, Jess Pope has been crowned the average champion at the Wrangler National Finals Rodeo.

Oh, and he was definitely in that race. It came down the final day of the 2021 campaign, and Pope did everything he could do to be crowned the world champion. He just fell a bit short to six-time titlist Kaycee Feild.

“I tried not to think about the world-title race, taking it a day at a time,” said Pope, 23, of Waverly, Kansas. “At the end of the day, it’s hard not to get past. Everybody is texting you and calling you and wishing you luck. I’m super thankful for it, but it makes your mind start to wonder.

“I showed up tonight, got in the locker room and I just had to tell myself, ‘You’re the only guy to control your own destiny; you can either show up, take care of business and do your job the best your can, or you can go out there and screw it up.’ ”

He handled his business, riding Frontier Rodeo’s Gun Fire for 92 points to win the final round and pad his earnings in a big way. The victory was worth just shy of $27,000. By winning the average, he grabbed the bonus check worth $69,234 and left Las Vegas with $230,475 over 10 December nights. Feild was the only cowboy to have a better NFR, but only by $1,100.

“Like I said at the beginning of the week: The cards are going to lay where they are going to lay,” Pope said. “I’m happy for Kaycee, and I’m ready to come back next year.

“It’s been a great week. He did his job. They pay me to ride bucking horses, not to write scores down. It’s all out of my control. I was super blessed to be here for 10 days and to have the finals I did.”

The NFR is a goal for every cowboy that wants to rodeo. It’s a destination because of the money available, but it’s also the place where the world champions are crowned each year. Because of that, the stress that comes with the finale intensifies, and the challenges increase. Winning more than a quarter million dollars in 10 days is a major accomplishment.

“It’s the longest but the shortest 10 days of your life,” he said. “It feels like an eternity, but we are at Round 10, and I feel like we just started yesterday. It flies by.

“I drew outstanding, and I had a great support system behind me. I have two great traveling partners (Rookie of the Year Cole Franks and three-time world champion Tim O’Connell) that helped me all year long. Without them, I don’t think I’d be where I am. They push me to be the best. I am forever grateful to be able to call them my best friends.”