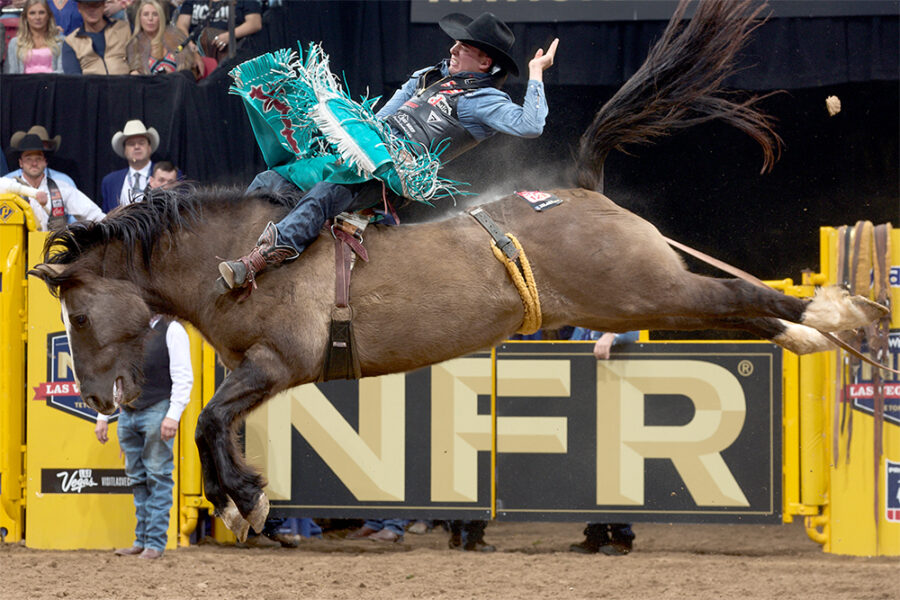 LAS VEGAS – With one night left in the 2022 ProRodeo campaign, Jess Pope is on the verge of his first world championship.

If he’s felt any pressure by being the king of the mountain, he hasn’t shown it. He’s been focused and stoic, and he’s riding equine sticks of dynamite as well as anyone has.

“There’s a little bit of pressure; there are a lot of what ifs,” said Pope, 24, of Waverly, Kansas. “Every time that comes in (to his head), I try to knock it out. I just try to clear it completely in my mind. We’ll see what happens, and then I can worry about everything.”

It’s a businessman’s approach to a wild game, and he’s handled every task in front of him. He’s No. 1 in the aggregate race with 778.5 points on nine rides and owns a lead of 15.5 points over the existing running up, one of his traveling partners, Cole Franks.

“That was kind of what I needed,” Pope said of his ninth-round ride. “I knew that horse was going to be real solid in that pen. I came out and did what I needed to do, and I was happy to win money in the hopper pen.”

The other traveling partner, Tim O’Connell, won the round, and Franks moved up a spot in the average, so all three had some positive things happen on Night 9.

After a night’s sleep, he will conclude his NFR. No matter what happens it’s been a joyous 10 days in Las Vegas. He has his routine during the day, then goes to work each night. He’s made almost $2,200 per second so far, but he’s got work to do on the final night of this year’s championship.

“It is a very special night,” he said. “It’s the 10th round of the NFR; it’s a serious sport. It’s really something special.”

And if he earns the Montana Silversmiths gold buckle, he’ll likely toast his comrades and celebrate all he can. It may not be champaign, though.

“Keystone Light is kind of what I’m in to,” Pope said with a laugh while talking about the beer. “It is the water from God.”

It doesn’t matter if it’s beer or a soft drink or water; he’s earned every last drop.