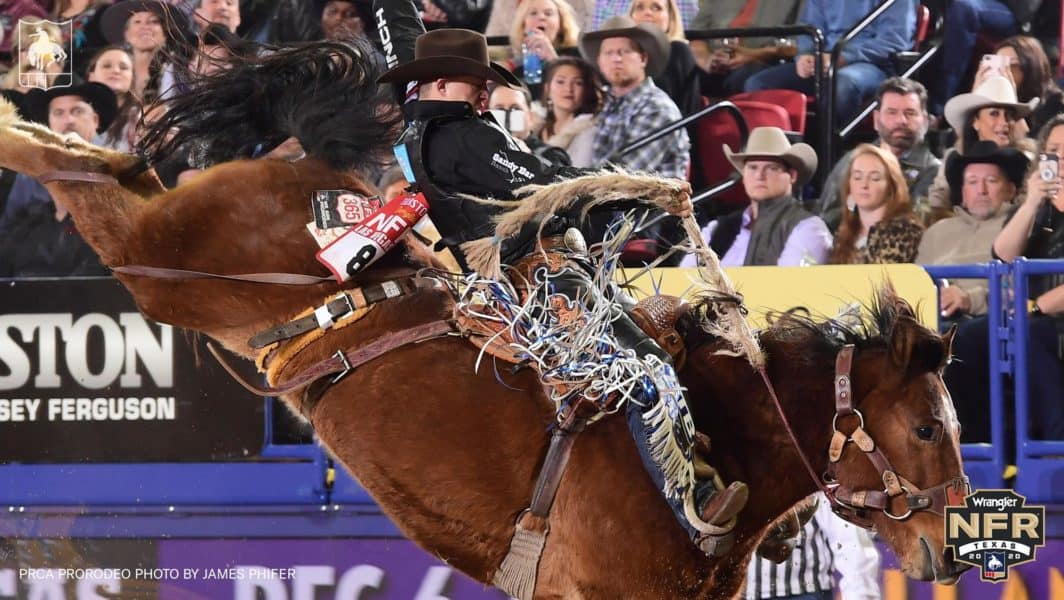 Two-time World Champion Saddle Bronc Rider Zeke Thurston (2016, 2019) is one of three saddle bronc riders holding more than one go-round record at the Wrangler National Finals Rodeo, with his most recent happening during Round 7 in 2019.

In 2018, Thurston and Cort Scheer each posted 89.5-point rides in Round 6 to set the round record. One year later, Thurston set the Round 7 record with a 92.5-point ride on Northcott Macza’s Get Smart.

Thurston and Scheer each hold two go-round records, while Billy Etbauer has four:

Normally, NFR round records are broken in small increments, one point or even a half-point at a time.

Thurston knew he was in for a good ride since Get Smart was named the top saddle bronc of the 2018 NFR and won the 2019 Pendleton Whisky Let ‘er Buck Saddle Bronc of the Year Award.

“We have a good history,” Thurston said. “He bucks so hard and tries his little heart out every time. I draw him a lot, and I always don’t know if I can do it. He just bucks so hard that there’s no room for error.

“Most of the rides I made on him were a blur because they happen so fast, and he hits the ground so violently and kicks the lights out – he’s just a cool horse. He was bucking hard and rapid, and I felt like I made a pretty good ride.”

Keeping a level head after his stellar Round 7 ride paid off for the Canadian cowboy, as he went on to win the ninth round and tied for third in the final round to place fourth in the average and win his second world title by a margin of $60,684.

“Anything can happen, I’ve been there enough times to know that you need to take it one horse at a time,” Thurston said. “In that 10-day set, anything can happen. That (setting a record) does help your confidence, but you still have to go do your job on the next one. But, getting things feeling good is a huge momentum-builder, and you just work off that.”

“I’m feeling pretty good but there’s the unexpected, not knowing what it’ll be like,” Thurston said. “But it’s the same bucking horses and a few new guys, and I’m really excited.”

The 2020 Wrangler NFR moved to Globe Life Field due to the ongoing COVID-19 pandemic, so a different arena means past NFR records likely will remain untouched this year. But the best rides and runs of the past remain a good measuring stick as the 120 best ProRodeo athletes kick up dust on a new batch of arena dirt.

Every point counts and a fraction of a second can mean the difference between winning a world title or coming in second at the Wrangler NFR.

The NFR Round 7 records are: