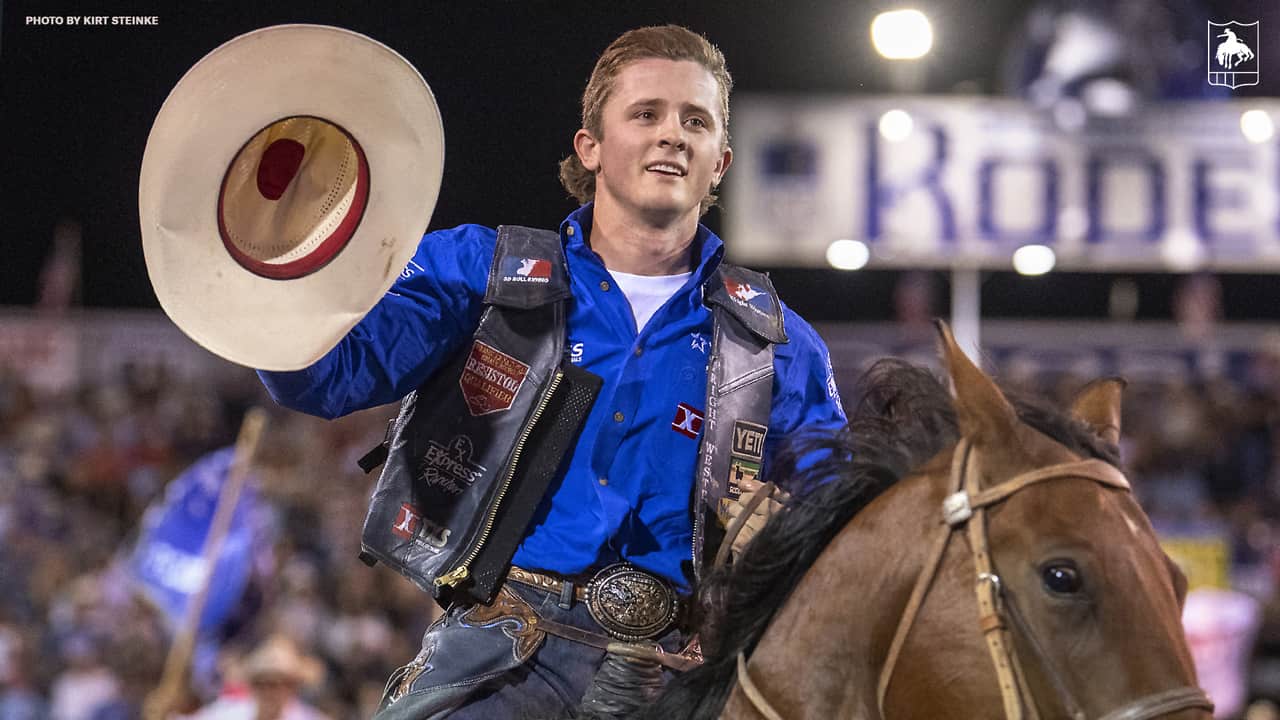 Stetson Wright showed why he’s one of the top cowboys in the world this past weekend at the Caldwell (Idaho) Night Rodeo.

Wright put up the top bull riding score of the week (Aug.16-22). The reigning world champion had a 92-point ride on Powder River Rodeo’s Top Shelf to win the rodeo.

“He was just a great bull that played to the left, right into my hand really, I couldn’t have asked for anything better that night in Caldwell (Idaho),” said Wright, 22.

“This whole summer has been really good for me, and it seems like it just keeps getting better and better,” Wright said.”I think these wins definitely give me a nice little boost, but I try not to think about it. I just keep trying to ride and do my job. It’s worked out pretty good for me so far this season.”

“He (Ryder) isn’t sweating me, I can tell you that for sure,” Wright said. “There’s still a lot of work left to be done. I’m not satisfied with where I’m at right now, I want to keep getting better. I mean it’s been one of the best years I’ve ever had, if not the best, but I still have that motivation that I can be even better.”

With five weeks left to go in the regular season, Wright is closing in on the PRCA record for the most money earned in the all-around standings before the NFR. That record is held by ProRodeo legend Trevor Brazile who earned $282,242 before the NFR in 2015. Wright is $29,763 away from breaking Brazile’s record. The regular season ends Sept. 30.

Below are the other top times and rides for the week of Aug. 16-22.

Brenten Hall and Chase Tryan posted the fastest team roping time of the week. The duo stopped the clock in 4.1 seconds at the Gooding (Idaho) Pro Rodeo on Aug. 19.

Mitch Pollock had the highest saddle bronc riding score this past week. He put together a 90-point ride on Barnes PRCA Rodeo’s Red Horse Crossing at the Cassia County Fair & Rodeo in Burley, Idaho, on Aug. 21.

Two cowboys tied for the fastest tie-down roping times of the week. Riley Webb clocked a 7.0-second run at the Mesquite (Texas) Championship Rodeo Aug.21, while Macon Murphy had the same time at the Yellowstone River Round-up in Billings, Mont., on Aug. 20.

Three different cowgirls tied for the quickest breakaway roping time this past week. Martha Angelone, Kayelen Helton, and Rickie Engesser all stopped the clock in 2.2 seconds from Aug. 20-22.

Maggie Poloncic clocked the fastest barrel racing time of the week. Poloncic put together a 14.22-second run at the Yellowstone River Round-Up on Aug. 20.

Scott Snedecor continued to impress this past week with the fastest steer roping time. He clocked an 8.8-second run at the Wyoming State Fair & Rodeo in Douglas, Wyo., on Aug. 18.