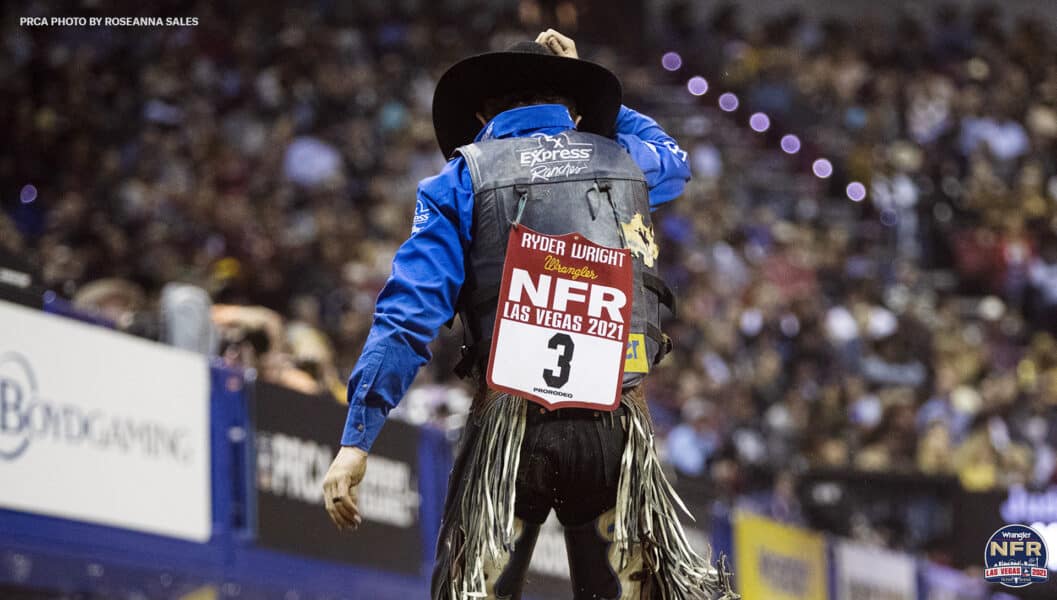 It was Wright’s second consecutive round win and upped his 2021 NFR earnings to $84,459. He leads the PRCA | RAM World Standings with $266,353. Wright owns the Round 6 record with his 90.5-point trip on Hi Lo Pro Rodeo’s Billie last year at the NFR at Globe Life Field in Arlington, Texas.

“It’s one of Hi Lo’s (Pro Rodeo) best horses and, shoot, he jumped out of there and did just about what I thought he was going to do,” Wright said. “I had that horse in Kissimmee (Fla.) earlier this year and I scored 88 points on him, so I knew he was going to go out and give me a shot. All I had to do was my part and luckily it worked out. I want to keep it one horse at a time. One jump at a time. Just keep it simple.”

The Wright family had a memorable round as Ryder won, Stetson was second and Spencer was third.

“Oh, it’s super awesome. We got the draw last night and we were standing out in the parking lot, and I told them we were going to be one, two, and three tonight (Tuesday) and it worked out.”

That changed in Round 6.

“I didn’t realize I broke the record,” Larsen said. “Any time you can break a record it feels great and if you can do it at the NFR it is even better.”

Larsen, an NFR veteran, was making his ride on Night Gazer.

“No, I had never seen him,” he said. “Anytime you are 90 or more at any rodeo, but especially at the NFR it is dang sure pretty special. He was very exotic. It was very exciting. It is better late than never to get a check. It’s funny how Vegas will just turn around and kind of go your way when you let it. This is a huge game changer for me. I can start getting momentum shifted my way and look for a better second half.”

Bull rider Creek Young is only a rookie, but he is riding like a savvy veteran.

Young won Round 3 and then added the Round 6 victory with a 90.5-point ride on Macza Pro Rodeo’s Ugly Wish.

“It feels great. I got on a bull, Ugly Wish, from Macza Pro Rodeo that Parker Breding rode in the first round and they’ve won several rodeos in the summer,” Young said. “I knew I had a really good bull that should fit me really well and I got it done for 90.5.”

This is a time Young relishes being a part of.

“Well, it’s been like nothing I’ve experienced before,” Young said. “Being a rookie, I just decided to take it all in and have as much fun as possible. I feel like when you’re doing that, that’s when you’re riding your best and I got another round win doing that. So, I think I’m going to keep doing that.”

Dirk Tavenner is having a memorable Wrangler NFR.

The Rigby, Idaho, cowboy split the Round 1 win, won Round 2 outright and added the Round 6 win with a 3.4-second run Tuesday night.

“Yes, I got a great start, my horse worked well,” Tavenner said. “I’ve done well on sleeper steers like that one. I have won a lot of rodeos; it’s been my bread and butter.”

“He was a barrel horse, they tried roping steers on him and he hated his job, so I bought him, and he fits me well and has just been awesome,” Tavenner said. “When you have a great horse and a hazer you trust, it takes so much pressure off me to just do my job. I just have to keep this rolling and see what happens at the end.”

Cory Solomon set the pace in tie-down roping with a 7.1-second to claim the Round 6 title.

“That’s the one Caleb Smidt went 7.1 on so I knew it was a great calf so I just decided I would go for the go round win,” Solomon said.

Solomon was quick to credit his horse Cisco.

“He came into my life a couple of years ago, I never dreamed he would get to this stage,” Solomon said. “I bought him to be a jackpot horse, took me couple of years to get him to where we are now. If anyone knows about south Texas calves, that calf tonight was just like being at home going to jackpots and just thankful to get a win on a good calf.”

“He allows me to go fast or to stay in the average, he doesn’t make a mistake,” he said. “When I first started, I didn’t have the money to get a horse like that, so I am so blessed and lucky to know that now 10 years after making my first NFR, I can know my horse is going to help me do whatever I need to do to be one of the top (tie-down) ropers in the PRCA.”

After a rough start to the 2021 Wrangler NFR, team ropers Coy Rahlmann and Douglas Rich Rich changed their fortunes in Round 6.

The duo stopped the clock in 3.6 second to take the Round 6 victory.

“We are pretty far down in the average so now we are just shooting at the rounds,” Rahlmann said. “I knew this was going to be a pretty tough round so I just tried to get a really good start and go as fast as I could without missing. This a great confidence builder knowing we can do it and hopefully we can get some more money out of the rounds.”

“We just had a great steer and Coy hit the barrier good and I had a good start and it all worked out and we made a good run. This is a dream come true.”

After earning $26,997 each, Rahlmann and Rich are 11th in their respective world standings.

Ivy Saebens had a tough start to the 2021 Wrangler NFR, placing in just one of the first five rounds.

Saebens turned it around in Round 6 winning with a time of 13.43 seconds.

“It has just been a rough week. Definitely not the way I thought this was going to play out, even last night was not what I had planned and no idea it was going to go that way. I am just glad I could get this done for JLo and her owners. I have just been in her way.”

Saebens was thrilled to get back on track at the Thomas & Mack.

“It is all a mental game on what we are doing. Our horses are just so good and the ground has been amazing. We can’t thank Las Vegas Events, Allen (Rheinheimer – Wrangler NFR General Manager) for their effort this year to make the ground so good. I was trying to force it too much and decided if it was meant to be it would be.”