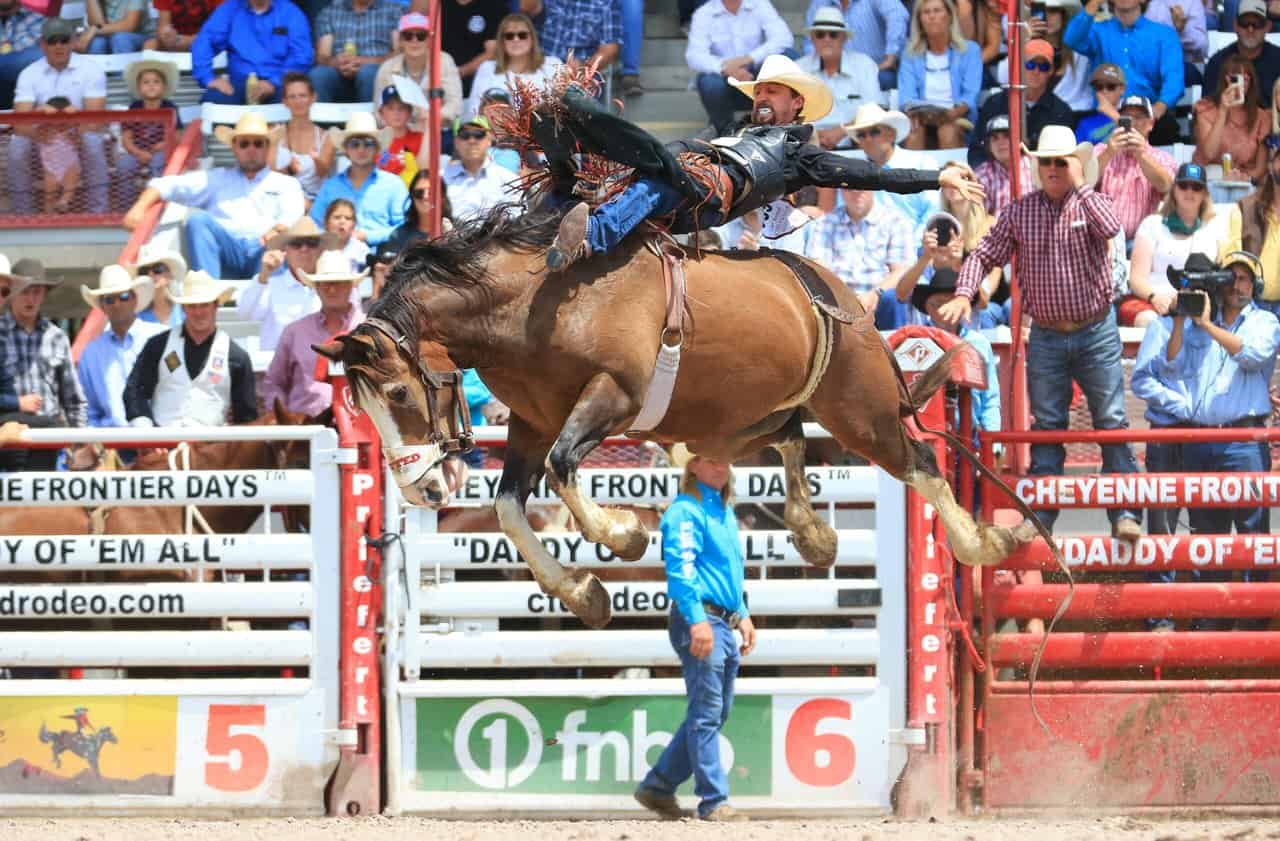 Three-time world champions Clay Tryan of Billings, Montana, and Jade Corkill of Fallon, Nevada, also won for the second day in a row at Frontier Park. The pair won the CFD team roping championship together in 2013. A win Sunday could make Corkill the first four-time team roping champion at the “Daddy of ‘em All”. He won in 2009 with Tennessee roper Chad Masters and last year with Oklahoman Clay Smith.

A couple of Texas women tied for the win in Semifinals 2 of breakaway roping. Tiffany Schieck of Floresville and Martha Angelone of Stephenville both roped their calves in 4.6 seconds. Angelone has qualified for the Wrangler National Finals Breakaway Roping (NFBR) twice, winning the inaugural event in 2020, and is currently third in the Women’s Professional Rodeo Association (WPRA) standings. Schieck, on the other hand, is not among the top 50 in the standings and a win at Frontier Park on Sunday would be the biggest of her career.

Reese Riemer of Stinnett, Texas, set the pace early in the tie-down roping with a 10.5-second run. The three-time NFR qualifier has not qualified for rodeo’s season finale since 2018. Today’s win, plus a win on Sunday, could put another trip to Las Vegas within reach for the 31-year-old Texan. 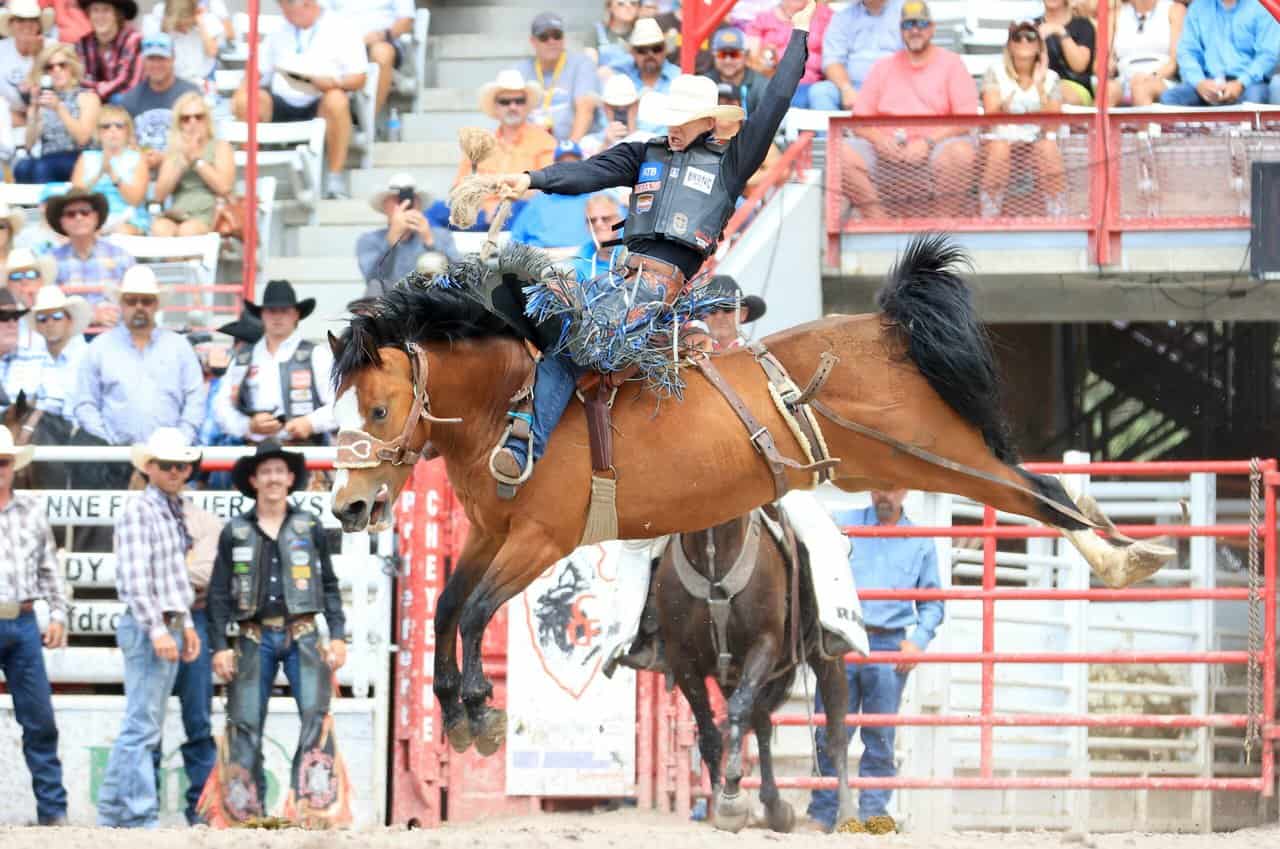 If Zeke Thurston wins the saddle bronc riding at the 126th Cheyenne Frontier Days Rodeo, it will be exactly 40 years since his father Skeeter won the rookie bronc riding at Frontier Park. Zeke, who lives in Big Valley, Alberta, has qualified for the Wrangler National Finals Rodeo seven times, has earned two world titles and is still looking for a big win here. He came one step closer on Friday when he won Semifinals 1 with an 89.5-point ride on Summit Pro Rodeo’s horse Miss Wichita. PRCA photo by Jackie Jensen

Two-time world champion Zeke Thurston of Big Valley, Alberta, rodeo Summit Pro Rodeo’s bucking horse Corina for 89.5 points to win Semifinals 2. Thurston has never won a championship at CFD, but his father Skeeter Thurston was the rookie saddle bronc riding winner at Frontier Park in 1982. With a winning ride on Sunday, Zeke could take another CFD title home to Canada for the Thurston family 40 years later.

Justin Shaffer of Hallsville, Texas, took first place in steer wrestling in Semifinals 1 with a time of 6.5 seconds. One of his biggest career wins was at the Ram National Circuit Finals Rodeo in 2017. Winning here could be another. There is at least a 50-50 chance that Sunday’s steer wrestling winner will be a first-time CFD winner since none of the men advancing from Semifinals 1 have won in Frontier Park.

Summer Kosel made history at Cheyenne Frontier Days during last week’s qualifying round of barrel racing by clocking the fastest time recorded at the “Daddy of ‘em All” in barrel racing. The South Dakota barrel racer proved that was no fluke by winning Semifinals 1 with a time of 17.34 seconds. 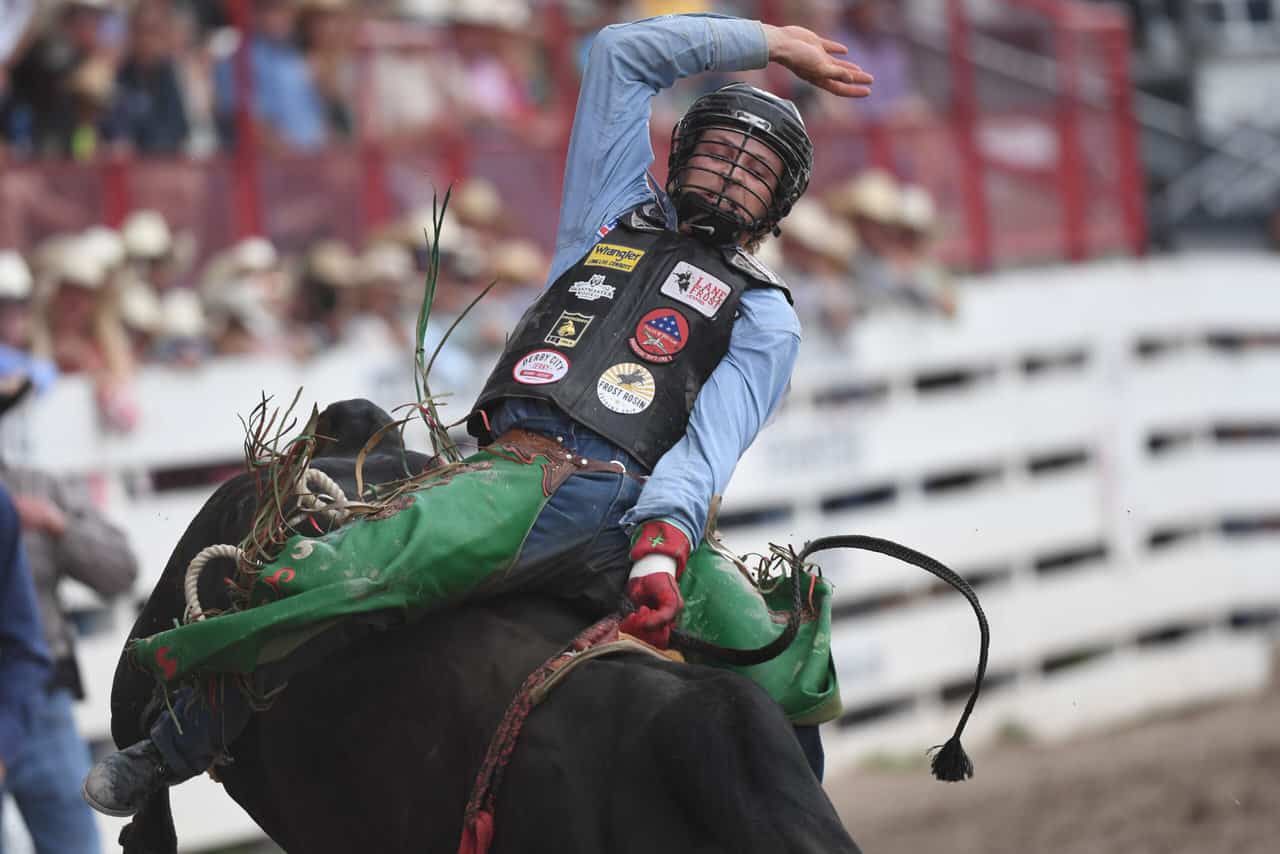 Josh Frost continued his winning ways at Cheyenne Frontier Days. The bull rider from Randlett, Utah, had a 91-point ride on Harper & Morgan Rodeo’s Blackout to win Semifinals 1. Frost is second in the world standings and is hoping for a win in Frontier Park on Sunday to help him get back to the Wrangler National Finals Rodeo next December where he is the defending champion for having the highest total score on ten rides. PRCA photo by Click Thompson

Josh Frost of Randlett, Utah, tallied 91 points when he rode Harper & Rodeo Company’s bull Blackout to win the Semifinals. Frost, who won the 2021 NFR title in bull riding for the highest cumulative score over 10 rounds, is currently ranked second in the PRCA standings. The younger brother of retired bull rider Joe Frost and second-cousin to bull riding legend Lane Frost is striving to become the first in his family to win a CFD championship.

Semifinals 2 will begin at 12:45 p.m. on Friday. The six fastest times or highest scores will join those who advanced on Friday in Sunday’s Championship Finals to round out the field of 12 in each event.

The following are unofficial results from Semifinals 1 at the Cheyenne Frontier Days Rodeo on Friday, July 29. Payoff subject to change.