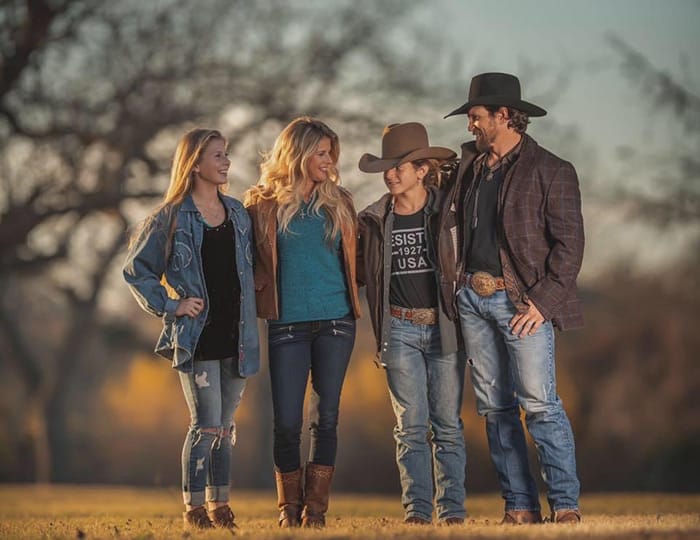 Jamie Steiner was worried, only like a mother would.

Her daughter Steely was in fifth place for the barrel racing at the Sandhills Stock Show and Rodeo in Odessa, Texas. More importantly, the teenage Steely was in position to qualify for the San Antonio Stock Show, one of the highest-paying rodeos in professional rodeo.

While happy that her daughter was so close to competing in the biggest rodeo of her young professional career, there was one hitch.
Jamie Steiner was also competing. 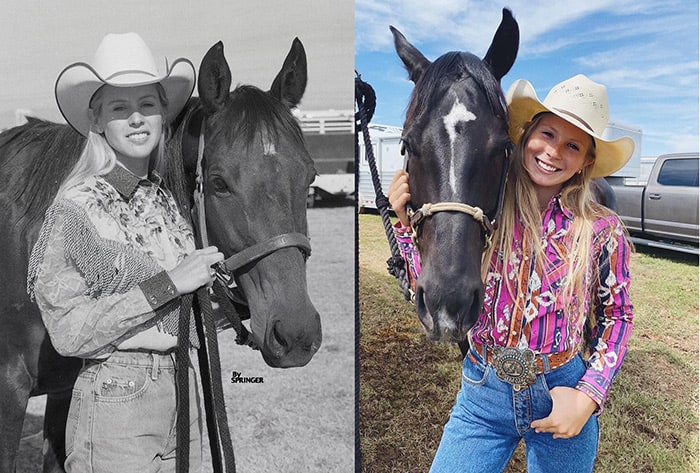 “I worried, what if I bump her out?” said Jamie. “I said, ‘I know, I’ll turn out (of qualifying for San Antonio). I’ll fix it so she would qualify.’ I’m competitive but I want her to win.”
Only a mother’s love could pull a competitor from the chance at a large paycheck.

The Steiners are more than a mother-daughter duo, who have similar tastes in music, “Texas country,” they both say and agree where to eat when on the rodeo road, “Gas stations … anywhere we can park the trailer,” said Steely. 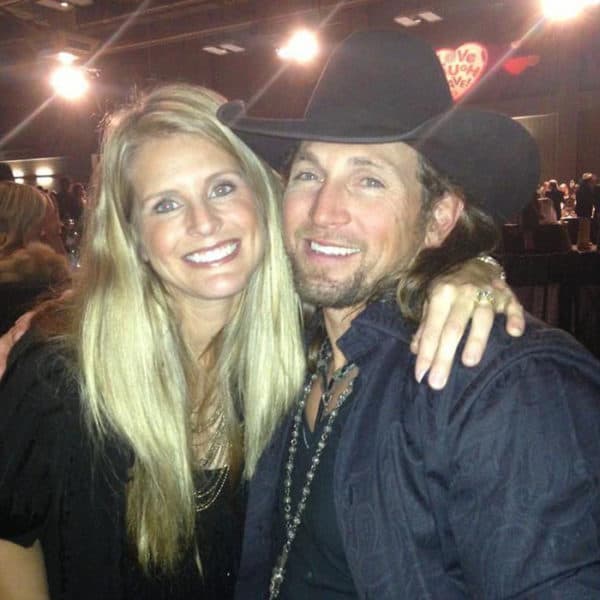 They both happen to be world-class barrel racers and each other’s biggest fan.

“Competing with her, it’s the best,” said Jamie. “Sometimes, we run back-to-back so I don’t get to watch her. I feel guilty sometimes about getting so caught up running my own horse and what I was going to do when I should be worried about Steely.” 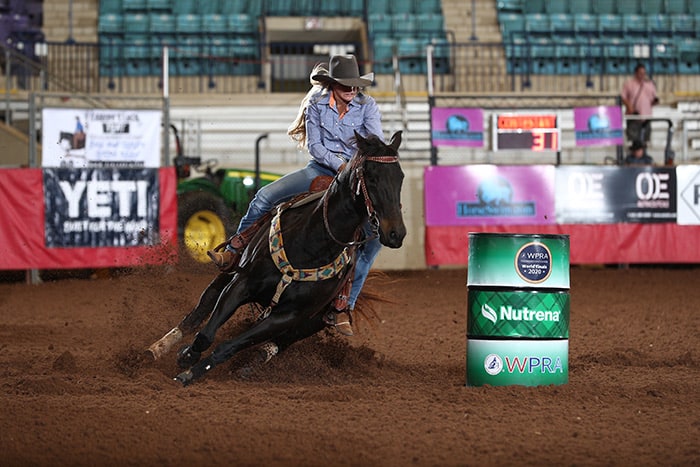 “If she beats me, I take it,” she said, adding there is no teasing. “If I beat her, she is happy for me. In fact, when I win, she’s as happy for me as I am.
“I wouldn’t be anywhere without her.”

Along with racing the same patterns, they both carry a well-known surname in rodeo. 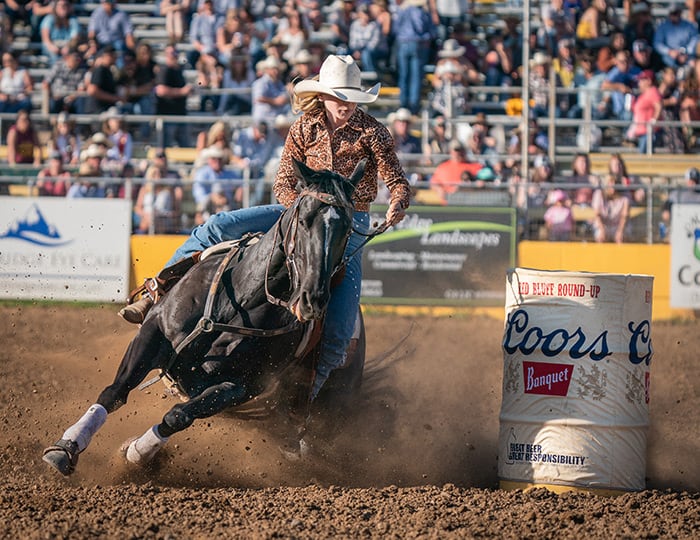 Jamie is married to Sid Steiner, the charismatic 2002 PRCA world champion steer wrestler. The two met at the Caldwell Nite Rodeo in Idaho in 1998 and were married in April of 2001. Her father-in-law Bobby Steiner, was the world bull riding champion in 1973.

Both Jamie and Sid also qualified for the Wrangler National Finals Rodeo in 2000.

Jamie Steiner, formerly Richards, is originally from Kennewick, Washington. She was the reserve collegiate barrel racing champion for Lewis-Clark State College in 1998, helping her school win the women’s team title.

“Oh, I don’t know … a lot,” Jamie said with chuckle of how many horses roam the property. She estimates around 80. “There are a lot of babies around. We have enough.”

The two work together training barrel horses, “I get them ready and Steely finishes them,” said Jamie. “She is a great training partner. I value her opinion.”

Jamie and Sid traveled together in their early years, competing at rodeos across the country. Sid would often place six month old Steely aboard his hazer’s horse.

The Steiners got Steely her first pony when she was three.

Steely earned her first check at a jackpot at age five. “My pony had her best run,” she said. “Mom was so excited. She asked if I wanted to run in 2D or 3D and I needed to get on a real horse.

“I went slower,” she finished with a laugh. “I was so scared.”

Steely planned to compete as a rookie in 2020 but with COVD-19 wreaking havoc to the schedule, she was allowed to push it back to 2021.

As of May 3, Steely Steiner was third in the WPRA rookie standings with $3,716. She also traveled by herself to the Clovis and Red Bluff rodeos in California in April.

And while the California trip didn’t go as well financially for Steely, reports back from others made her mom proud.

“She hitched rides with other people and I had so many people adopting my child,” said Jamie. “She’s just a good kid.”

Steely is thriving under Jamie’s tutelage.

“At this point, No. 1, you can’t win without your horse,” said Jamie of the lessons taught. “We take care of our horses. They are our best friend.

“And No. 2, the mental game is difficult. You will lose more than you will win. We talk about being strong mentally. We have to be able to handle losing.”

The second lesson has been a little tougher for the teenager.

“She’s shockingly got a lot of her dad’s competitive spirit,” said Jamie with another laugh. “They have a lot of emotion and show it. It can be rough. She struggles with it sometimes.”

Steely did not disagree.

“It’s a blessing and a curse,” she said with her own laugh about inherited traits. “I have to learn to get over it.”

That trait led to one of their more memorable “tiffs” as Jamie called it.

The two were driving through eastern Montana after competing in Killdeer and Mandan, North Dakota on the Fourth of July. Steely had a good run in Killdeer, not so much in Mandan.

“I was a little bit upset,” said Steely. “Mom tried to talk to me about it. I don’t know what we were fighting about.”

There was just one problem. “I was driving, going about 85,” continued Jamie. “I wasn’t being very mature. I know, it didn’t make any sense.”

Like her parents before her, Steely has some long-range goals.

“The goal is always the Wrangler NFR,” said Steely, who finished second at the Junior American in 2018. “That’s the dream for sure. For now, every time I run, I want to do the best that I can and do the best by my horse.”

“We’ll go out and do what we do,” said Jamie, who along with Steely finished tied for fifth and eighth, respectively the weekend prior to Mother’s Day in Helotes, Texas. “Let the chips fall where they may. We’ve got some nice horses to take but we still have a lot to learn.

“Steely will be going more than me. But I’ll go with her when she needs help driving.”

And mom wouldn’t have it any other way.

“Being with her, it’s the best. It’s so fun,” she finished. “You get to do something with your child you didn’t think you would ever get to do. She’s just fun to be around.”