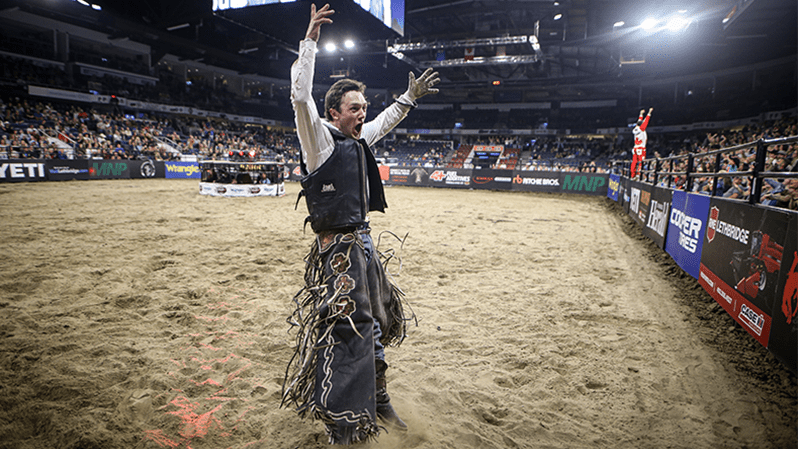 Fresh off his career-first Cup Series victory Friday evening, Tetz returned to action amidst a wave of momentum as he readied to take on Later Gator (Wild Hoggs/Colin Eskeland) in Round 1.

As the last man to leave the chutes, Tetz punched his ticket to the championship round as the top-ranked man in the event as he reached the requisite 8 aboard the powerful animal athlete for 86.5 points.

Tetz then elected to go head-to-head with Deep Creek (Vold Rodeo) as his final opponent.

Matching the bull jump-for-jump, Tetz appeared to reach the whistle, however the call went into an immediate official’s review.

After careful scrutiny, the 2018 PBR Canada Rookie of the Year was awarded a score, marked an event-best 88 points to clinch the golden finish.

Tetz’s unrivaled effort earned him a maximum 80 national points as he seeks his career-first PBR Canada Championship this November in Edmonton, Alberta.

After beginning the event ranked No. 6 in Canada, Tetz surged to No. 2, inching within a mere 28 points of the top rank.

Logan Biever (Claresholm, Alberta) remained atop the national standings courtesy of a fourth-place effort in Lethbridge.

Despite being bested by Gandy (Skori Bucking Bulls) in a hard-fought 5.35 seconds in Round 1, Biever was one of six riders who had a renewed shot of victory when they advanced to the final round via time.

Making the most of his second chance, Biever conquered 2020 PBR Canada Bull of the Year Catch My Drift (Two Bit Bucking Bulls/K Rose Ranch) for 84 points.

The Top 5 finish earned Biever a crucial 29 national points and allowed him to remain No. 1 in the heated race to be crowned the 2022 PBR Canada Champion and earn the accompanying $50,000 bonus.

As the only other rider to be flawless inside ENMAX Centre Saturday evening, the Austin Gamblers’ Blake Smith (Abbey, Saskatchewan) was second, netting 61 national points.

After riding Big Duece (Vold Rodeo) for 81.5 points in Round 1, Smith began the championship round as the third-ranked rider in the event.

With an early pick in the championship round bull draft, Smith selected a familiar opponent in Eski Time (Wild Hoggs/Coin Eskeland).

A rubber match, after bucking off the bull in 2.96 seconds during the October 2021 Cup Series event in Saskatoon, Saskatchewan, Smith covered the bull in their most recent showdown, scored 83.5 points en route to his event win last December on the Touring Pro Division in Lloydminster, Saskatchewan.

Smith replicated his past success, clinching the silver finish as he reached the whistle for 87.5 points.

The young Saskatchewan man rose one position in the national standings from No. 4 to No. 3. He is now within 33.17 points of No. 1 Biever.

Coverchuk left Lethbridge having earned a much-needed 42 national points, climbing from No. 9 to No. 7 in the rankings, rising within 145 points of the top spot.

Chasing history in 2022, should Coverchuk repeat as the PBR Canada Champion, not only would he tie three-time title holder Aaron Roy (Yellow Grass, Saskatchewan) for most championships won by one rider, but he would become the first rider to accomplish the feat in consecutive seasons.

Schmidt rose three positions in the Canadian standings from No. 19 to No. 16 via the result.

In the bull pen, Al Capone (Wild Hoggs/Sure Fire) and Phantom Fury (Wild Hoggs Bucking Bulls) tied for the YETI “Built for the Wild” Bull of the Event honor, both marked 44.5 points in the championship round. Al Capone lit up the scoreboard when he bucked off Keaton Martz (Forestburg, Alberta) in 5.45 seconds, while Phantom Fury bested Zane Lambert (Ponoka, Alberta) in 4.7 seconds.

The 2022 PBR Canada Sup Series, presented by Wrangler, will next travel to Grande Prairie, Alberta, and Bonnetts Energy Centre on Friday, September 30 and Saturday, October 1. Action for the PBR Peace Country Invitational, presented by Ritchie Bros., will get underway nightly at 7:00 p.m. MT.