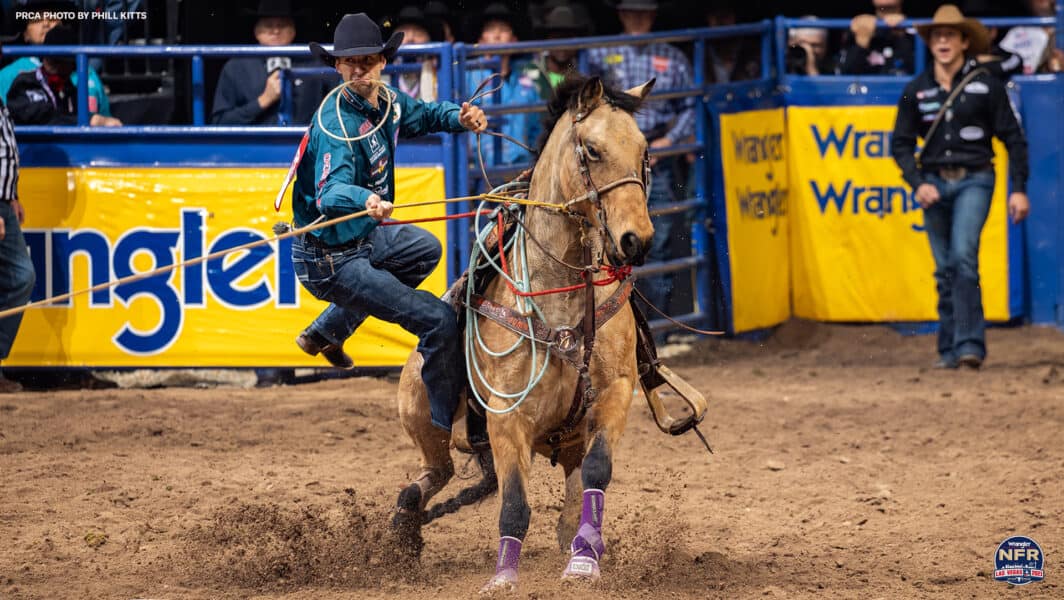 The primary horse Hanchey was aboard all season – TJ – passed away. The horse was owned by Logan Bird.

Hanchey said the loss wouldn’t set him back at the Wrangler NFR and it didn’t – at least for Round 1.

“That run was so much more than a round win, with me losing TJ, 10 days ago and he was what I was planning on riding at the Finals, so I really wasn’t sure what I was going to do,” Hanchey said.

However, Hanchey had his doubts about getting on Peso.

“I said Logan, he’s never been there, and Logan said ‘you have to trust me’,” Hanchey said. “I put my trust in him and the man upstairs and it paid off.”

After watching the field of ropers compete in front of him, Hanchey was confident he could deliver a victory.

“I knew I had the calf to win it,” Hanchey said. Peso handles fast calves and I just had to make sure and stay out of his way and he did his job so I could do mine.”

Veteran star bull rider J.B. Mauney made his first ride at the Wrangler NFR one to remember.
The Texas cowboy had an 87.5-point ride on Painted Pony Championship Rodeo’s Cocktail Diarrhea to share the title with Ky Hamilton.

Hamilton, a native of Mackay, Australia, had an 87.5-point ride on Hurst & TNT Pro Rodeo’s Rip.

“Well, 16 years and I hadn’t been nervous in a long time,” Mauney said. “I was nervous today. I was ready ten minutes after (2 p.m.)… This was a goal of mine when I was a little-bitty guy and I went with a different route for a long time. I finally accomplished it and to get this one under-the-belt is what it all boils down to.”

This was Hamilton’s second time at the NFR, and he was thrilled to get things rolling.

“(The) start is everything,” Hamilton said. “You get one down at the start, just keep the ball rolling from there. One at a time, keep them going.”

Mauney has been a star for a long time, but he still relished in the roar of the crowd at his first Wrangler NFR.

“This is a sport that if your adrenaline isn’t pumping then you’re doing it for the wrong reasons,” Mauney said. “Anytime the music starts jamming and the crowd gets into it, it makes your blood pump a little more than it usually does.”

Pope made his first appearance at the NFR in Las Vegas and didn’t miss a beat capturing Round 1 of the 2021 Wrangler NFR with a 90.5-point ride on Pickett Pro Rodeo’s Night Crawler.

“It was an awesome ride, that’s the kind of horse everyone wants to get on,” said Pope. “They are souped up hoppers. They are like riding a dang rocking chair and one you want to get on every time. I was super excited. She had a lot of up and down.”

Pope said he had never been on that horse before Thursday.

“I watched two videos before I came over here and left the hotel,” said Pope. “To win a round here was so electrifying. (Arlington) Texas was so big and the fans were far away, and you don’t feel the electricity you feel here. It benefits me and is going to work out for me. This started off just the way I had it planned. It is going to be an exciting 10 days.”

Wade/Yates set the pace in team roping in Round 1

Team ropers Tyler Wade and Trey Yates had a great opportunity to go fast in Round 1 and that’s exactly what they did.

Wade/Yates stopped the clock in 4.0 seconds to claim the title.

“You kind of have to block the crowd and everybody out because you have to focus on what you do good,” Wade said. “I just wanted to stay focused, and I have faith in our run and our horses and Trey. I’m just ready for the next nine days.”

Yates concurred with his partner.

“We had a great steer and Tyler got a really good start to head him and have time to pull him,” Yates said. “My horse got around the turn and put me in a good spot and we finished the run really well and it was fast. You take it all one run at a time and rope the steers for what they are.”

Wade and Yates are fifth in their respective world standings.

The steer wrestling Round 1 victory by cowboys Dirk Tavenner and Riley Duvall as each clocked 3.7 runs.

“I come in here wanting to go fast, I was going to try and break the barrier and see how fast I can be,” said Duvall. “I’m riding Trever Nelson’s horse, he let me haul him this year and he’s working really good.”

Tavenner was making his Wrangler NFR debut and made his run at the Thomas & Mack memorable.

“This is awesome to grow up dreaming or winning a NFR go round…just still can’t believe it,” said Tavenner.

Two-time saddle bronc riding world champion Zeke Thurston and Chase Brooks were ready to go in Round 1 at the Wrangler NFR – and it showed.

Thurston and Brooks shared the Round 1 win in Las Vegas.

Thurston had an 88.5-point ride on Cervi Championship Rodeo’s Vitalix Wyatt Earp and Brooks came through with an 88-point trip of his own on Sankey Pro Rodeo & Phenom Genetics’ Pendleton Whisky’s Marquee.

“Anytime you come to the finals, I say all the time ‘you want to jump out and hit them in the face with a round win right off the bat,” Thurston said. “That just gets everything rolling… It just sets you up to be in a good position for the rest of the week.”

Brooks, a four-time Wrangler NFR qualifier, was no stranger to his horse.

“I’d been on that horse probably 4-5 years ago before I really knew what I was doing, and he ear holed me,” Brooks said. “I knew if I fell off tonight Wade (Sankey) wasn’t going to let me live it down. It was probably one of best picks I could have in that pen.”

After a trip to Arlington, Texas in 2020 the duo was thrilled to return to the Thomas & Mack Center.
“Oh, I love it here in Vegas. Just standing back there when you’re saddling horses and everyone’s up cheering you can feel the energy,” Brooks said. “It’s tough to beat. You don’t get that kind of excitement in many rodeos.”

“I love Vegas. It was fun, I’m glad they did it there (in Arlington),” Thurston said. “It gave us a rodeo to go to, but this is the home of it.”

Cheyenne Wimberley and Amanda Welsh got off on the right foot at the Wrangler NFR as they split the Round 1 win. Each had 13.77 second runs.

Wimberley’s Round 1 victory checked a box she’s been waiting awhile to accomplish.

“This was awesome, it’s a relief. To know the horsepower was tight and the go-round was a tie and times were back-to-back,” Wimberley said. “We are fortunate to ride such great athletes. To be here five times and finally get the win it great. Definitely knocked off a goal of mine tonight.”

Welsh enjoyed her first experience at the Thomas & Mack Center.

“We just wanted a solid run, and it was great,” Welsh said. “He really reacts to the music and the loud crowds. It helped him fire a little more. It helps you get your finals off to a good start and a good base run to go off for the next round.”