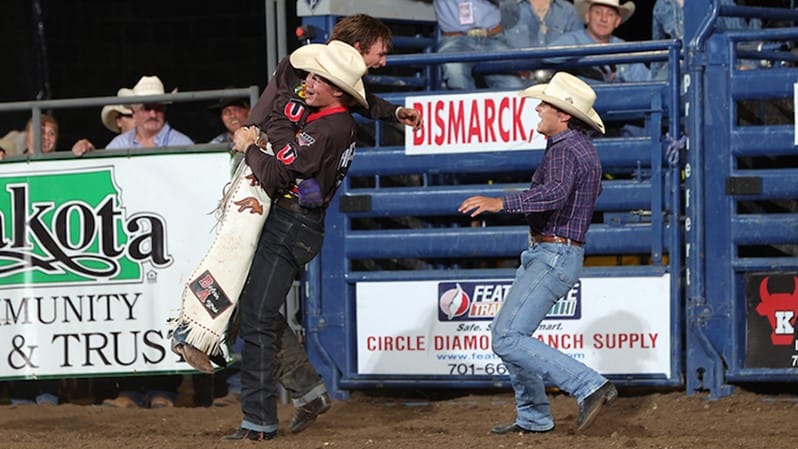 TRYON, N.C. – One of the new elements during the PBR Team Series is the addition of a Bonus Round, and this round of competition will help determine event winners in the case of ties in win-loss records among the eight teams competing at every event. The Bonus Round will also serve as a tiebreaker for playoff seeding this coming November for the PBR Team Series Championship on Nov. 4-6 at T-Mobile Arena in Las Vegas.

So what exactly is the Bonus Round?

In the Bonus Round, each team will select one rider to attempt to ride one final bull. This rider does not have to be one of the five riders who competed earlier in his team’s respective games at an event, and instead he can be an alternate (bench) rider.

The Bonus Round will be a draft round, where each team will be able to draft the bull they would like their rider to attempt. The draft order for the eight teams will be determined by aggregate team score from all of the previous games at an event. The team with the highest aggregate will have the first pick in the draft – for Unleash The Beast fans, think of the championship round draft. The Bonus Round is essentially that for PBR Teams.

The Bonus Round is independent of the results of that weekend’s previous games and only applies to the overall event standings in the case of a tie.

The overall event-winning team at any PBR Team Series event is the team with the best overall win-loss record. In the event of a tie in the event standings, a team’s bonus points from the Bonus Round will be the first tiebreaker. If there is still a tie, the second tiebreaker will be the team’s total aggregate score from all of its games. The next and final tiebreaker will be combined buckoff time from a team’s games.

Fans saw the Bonus Round come into effect in Bismarck when the Kansas City Outlaws and Carolina Cowboys both went 2-0 at the Bismarck Event Center. Therefore, the Bonus Round served as the tiebreaker.

This could also be the case on Saturday night in Tryon with four teams potentially going 2-0 at the Tryon International Equestrian Center – Texas Rattlers, Arizona Ridge Riders, Oklahoma Freedom and Missouri Thunder.

So, what does the Bonus Round mean for the PBR Team Series Championship on Nov. 4-6 in Las Vegas at T-Mobile Arena.

All eight teams qualify for the playoffs that weekend, and in the case of two teams being tied in the standings for playoff seeding, the first tiebreaker will be points earned all season long in the Bonus Round.