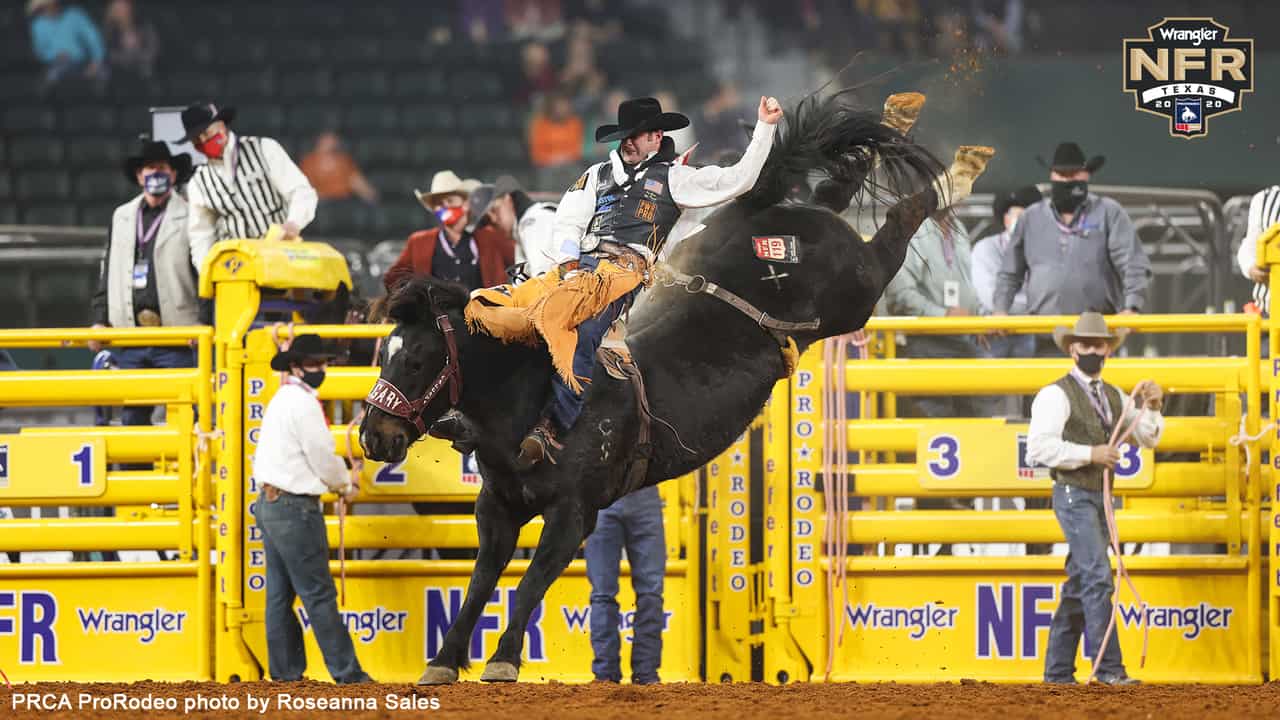 The 2020 Wrangler National Finals Rodeo was a long-awaited opportunity for the top ProRodeo athletes to compete for their share of the $10 million in prize money. And after a stunted season due to COVID-19, it was a highly anticipated chance for fans to see some of the best rides and runs at Globe Life Field in Arlington, Texas, Dec. 3-12.

Feild won Round 3 with a 91.5-point ride on Calgary Stampede’s Xplosive Skies. He capped off the Finals with a ride that was almost identical in Round 10, posting a 91-point ride on Three Hills Rodeo’s Junior Bonner on a re-ride.

Other competitors to post the highest scores and fastest runs for their event at the 2020 Wrangler NFR were:

• Steer Wrestling – Stetson Jorgensen and Jacob Edler both made a 3.3-second run in Round 6.

Although it was a different arena this year, it’s interesting to note that their run was also faster than any posted at the 2019 NFR. Jorgensen had that fastest run of 2019 when he made a 3.4-second run during Round 7.

• Team Roping – Clay Smith and Jade Corkill posted a 3.6-second run in Round 5.

The 2019 NFR’s fastest team roping run was also 3.6 seconds, made by Cody Snow and Wesley Thorp in Round 7 and Kaleb Driggers and Junior Nogueira in Round 9.

• Saddle Bronc Riding – Stetson Wright and Ryder Wright each made 91-point rides in Round 10. Stetson’s ride was on Andrews Rodeo’s All or Nothin, while Ryder’s ride was on Pete Carr Pro Rodeo’s Big Tex.

The highest score in saddle bronc riding at the 2019 NFR was 92.5 points from Zeke Thurston on Northcott Macza’s Get Smart in Round 7.

• Tie-down Roping – Haven Meged and Hunter Herrin each made 6.8-second runs, with Meged’s happening in Round 6 and Herrin’s in Round 7.

Their time also was faster than any made at the 2019 NFR, when 6.9 seconds was the fastest run, posted by Tuf Cooper during Round 3.

• Barrel Racing – Hailey Kinsel set a WPRA record on a standard pattern when she stopped the clock in 16.56 seconds in Round 8.

• Bull Riding – Three bull riders made 92-point rides. The first came from Stetson Wright on Beutler & Son Rodeo’s Record Rack’s Smoke Stack in Round 9. Then in Round 10, Sage Kimzey and Roscoe Jarboe each made 92-point rides; Kimzey on Dakota Rodeo’s Safety Meeting and Jarboe on Rafter G Rodeo’s Freddy Fender.

Kimzey had the highest-scored bull ride of the 2019 NFR with a 94-point ride on Powder River Rodeo’s SweetPro’s Bruiser in Round 8.