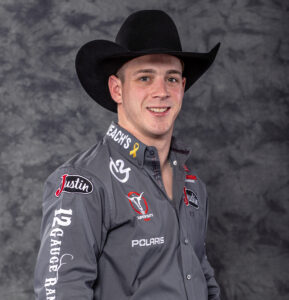 Fun Facts about Tim: This year he won his third Cheyenne Frontier Days saddle for being the bareback riding champion. Just a couple of weeks later he was sidelined with an injured thumb on his riding hand. It’s the second year that he missed the last few weeks of the season. Last year he had to have a portion of his tailbone removed. This year, it was surgery on his thumb. It gave him more time at home with his growing family. Tim and his wife, Sami, have two boys, Hazen who will be five next March and Stratten who was born last April. Tim grew up in a rodeo family with a father that would take Tim and his older brother Will along when he was working as a pick-up man. Will followed in his father’s footsteps and now is a partner in a stock contracting firm and is married to Sage Kimzey’s sister, Dusta.