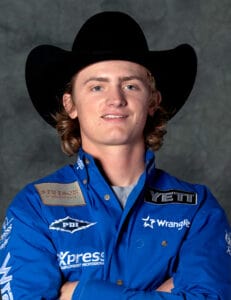 
Fun Facts about Ryder: Last year he accomplished something that no one else in his family has done except for his dad, Cody, when he won his second saddle bronc riding world championship. Cody won two (2008 and 2010). His uncle Jesse won the world in 2012 and Spencer was the champ in 2014. And, at just 23 years old, Ryder has the potential to add many more world titles. He loves riding bucking horses and going to rodeos. It’s a way of life for all of the Wright family. Even more than competing, Ryder loves his wife, Cheyenne, and their daughter Bexley. Last year’s WNFR will always be one of his favorite memories because he got to compete in the saddle bronc riding alongside two of his brothers, Rusty, and Stetson. This year he and Stetson have been in a battle for the top spot and that is likely to continue throughout 10 nights in the Thomas and Mack Arena.