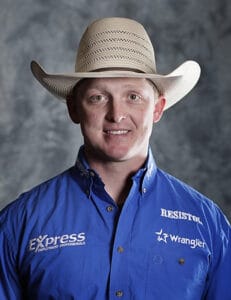 Fun Facts about Spencer: Spencer has had success this year traveling with his three nephews, Rusty, Ryder and Stetson Wright. Just four years older than Rusty, Spencer qualified for his first WNFR in 2014 and left with the gold buckle. He was the National High School Rodeo Association champion in 2008, then won the college title for the College of Southern Idaho in 2013. He is the only saddle bronc rider in history to win championships at all three levels. He finished in 17th place in 2018 and 2020, and just barely made it this year. He got the final spot by winning $89 more than K’s Thomson. Spencer’s wife Kallie is a barrel racer and trainer. They have a daughter Steeley and along with the latest addition to the family, son Levi, will all be in the stands at the Thomas and Mack as Spencer’s biggest fans.