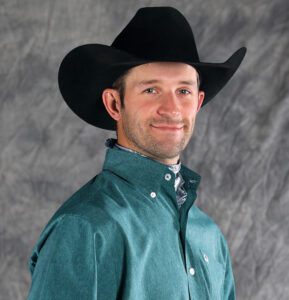 Fun Facts Shane: In high school, Shane told his baseball coach that he was going to quit and focus on rodeo. That coach is now one of his biggest fans. That decision has led to 13 consecutive WNFR qualifications and he is closing in on $2.5 million in career earnings. Through rodeo, he also met his wife Taylor, who will be competing at the Wrangler National Finals Breakaway Roping. Shane watched her compete at the Thomas and Mack in the barrel racing when she was Taylor Jacobs. The couple makes their home near Giddings, but his Louisiana roots run deep and that will always be home. The love of everything Cajun and an enterprising spirit led him to start Bo’s Boil N Geaux, a food trailer that features in-season boiled crawfish among other favorites. Shane is also on the PRCA’s contestant executive council representing tie-down ropers. His leadership has influenced him to bring rising stars on the road with him. This year he has been traveling with WNFR rookie Kincaid Henry. When he gets home from Las Vegas, he will be hosting a series of Jr. roping and a camp to keep tie-down roping growing.