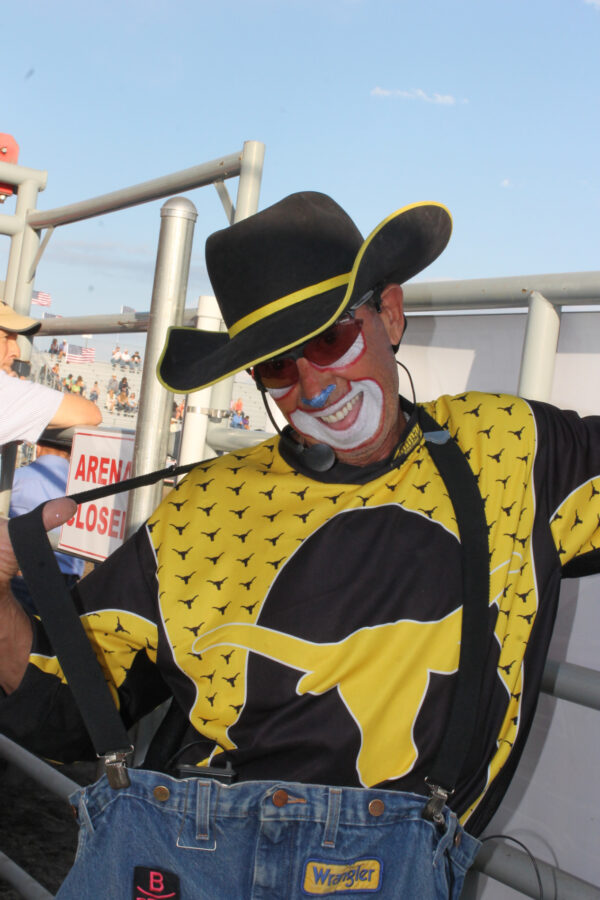 Helena, Mont. – He wears more makeup than a woman and dresses in baggy pants.

He’s full of laughs and jokes and loves to make people laugh.

The De Winton, Alberta, Canada native spent thirty years as a Calgary firefighter, working rodeos on the side, before retiring from firefighting eight years ago.

His style of comedy and sense of humor have brought him awards, including nine times as the Canada Pro Rodeo Clown of the Year, and two times as alternate barrelman for the Wrangler National Finals Rodeo, the PRCA’s world championship set in Las Vegas each December.

This will be Halstead’s second trip to Helena; he was there in 2018. He loved the Last Chance Stampede then and looks forward to it this year.

“That crowd is so fun,” he said. “I’ll be honest, that rodeo is a hidden secret. I would never have guessed it would be that good of a crowd. It was more than I expected.”

He has no game plan when it comes to his rodeo comedy. It’s all off the cuff. “I don’t have a script,” he said. “I joke, and whatever I see with the crowd, I and the announcer play off of. I love the crowd interactions.”

His favorite part is making kids laugh. “There’s nothing better for me, than to see a kid smile.” It stems from the accidents and fires he saw as a firefighter in his former career. “I saw a lot of things people don’t want to see, so for me, making a kid smile is what makes me smile.”

He’s married to his wife Michelle, who runs marathons and loves to work out. Exercising is not Dennis’ style, he jokes. “God gives you only so many heartbeats,” he wise cracks. “Why would you waste them in a gym?”

And, “My wife wanted me to start working out with her, so I bought her an exercise bike with a sidecar.”

Halstead will entertain during each performance of the Last Chance Stampede, July 29-31. Performances begin at 8 pm nightly at the Lewis and Clark County Fairgrounds.

Tickets range in price from $17-$23 for adults and $5-$20 for children. All tickets for the July 29 performance are general admission.

Tickets can be purchased online at LCCFairgrounds.com and at the ticket office during business hours.