Minnesota man to bring the funnies, laughs to Hastings rodeo 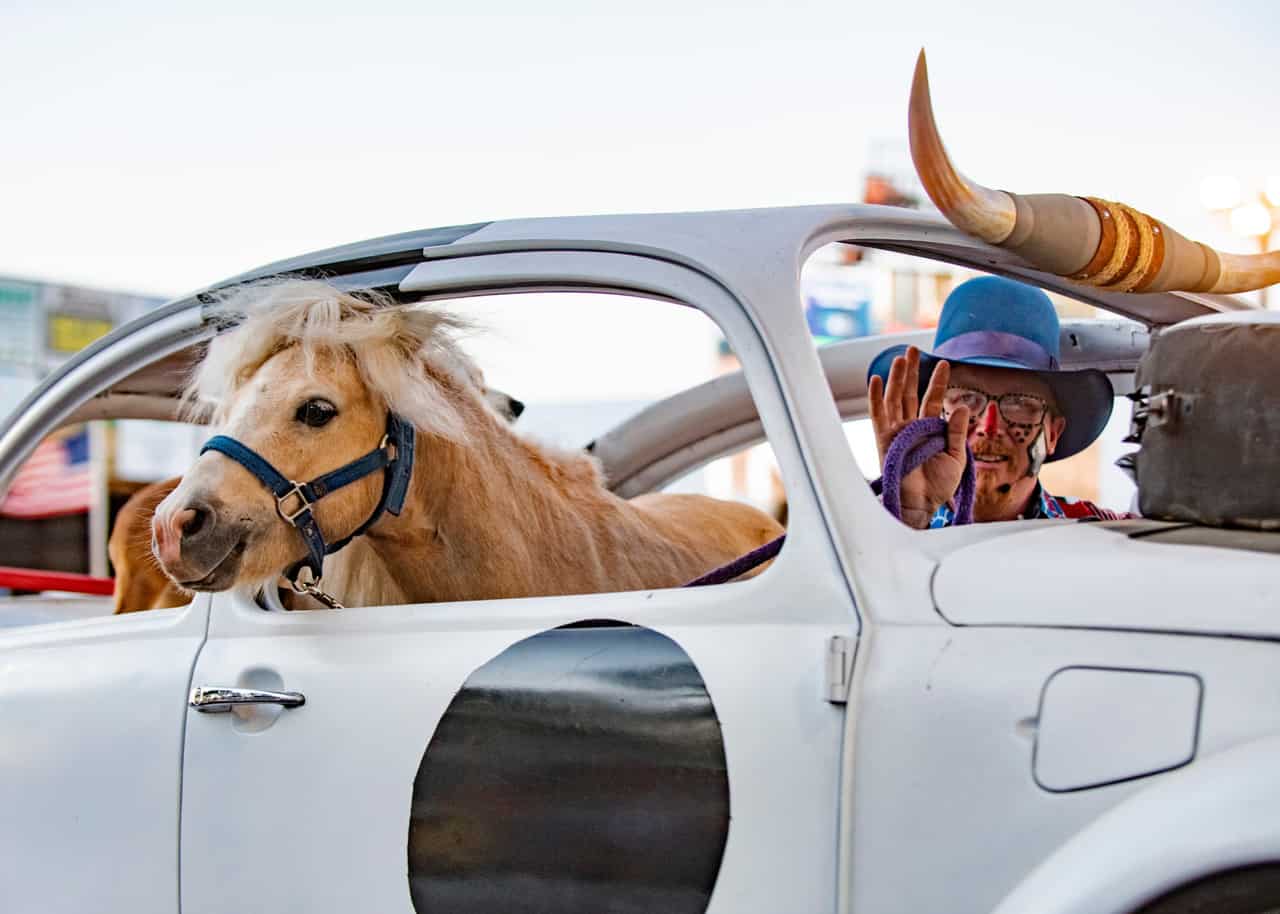 Rodeo clown Jesse Larson’s horse hangs out in the back seat of a car with Larson. The Minnesota man will entertain at this year’s Hastings rodeo. Photo by Beth Kujala Photography.

Jesse Larson, Duluth, Minn., will bring his brand of comedy to the rodeo, held at the Adams Co. Fairgrounds August 20-22.

A second-generation cowboy, Larson began competing in rodeo at age eighteen. His favorite event was steer wrestling, although he had to convince his dad, a three-time Minnesota Rodeo Association tie-down roping champ, that he was serious.

Larson hadn’t competed in high school sports, and his dad didn’t think he would stay with steer wrestling. “I had to play baseball for a season, so my dad would cosign a note on my steer wrestling horse,” he said. “He didn’t know if I would stick it out.”

Larson steer wrestled for five years, before a badly broken foot ended his competition days. Doctors told him if he continued to steer wrestle, chances were good he could break it again, and if it broke a second time, it would affect his ability to walk.

So he quit. But not without regret. “If I could steer wrestle again tomorrow, I’d go right back to it. I craved it.”

Larson had always wanted to be a rodeo comedian, but never had the chance.

Then one day, at a rodeo, the clown didn’t show up. At the last minute, he got the call. “We need a clown in three hours. Can you be there?” He could, and the next chapter in his rodeo career began.

That was twelve years ago, and since then, his career portfolio has grown to up to 75 performances a year. He leaves his house in the spring and isn’t usually home until September.

Some of Larson’s rodeo acts involve a Volkswagen bug converted into an airplane, a second Volkswagen bug that his horse Stuey drives, an exploding barbecue grill, and Corgi dogs that do tricks.

When he’s not on the rodeo road, he’s involved in several other businesses: a construction company, lawn care and snow removal, handyman services, auctioneering, and an antique business.

“You can sleep when you’re dead,” he laughs. “It’s lots of hard work, but you don’t get ahead by not working.”

Larson will entertain during each night of the Oregon Trail Rodeo, held in Hastings August 20-22.

Rodeo tickets go on sale August 6 and range in price from $10-$20. They will be available online at www.Adams CountyFairgrounds.com, at the fair office (947 S. Baltimore, Hastings, Neb.) and at the gate.

For more information, visit the website or call the Adams Co. Fairgrounds office at 402.462.3247.