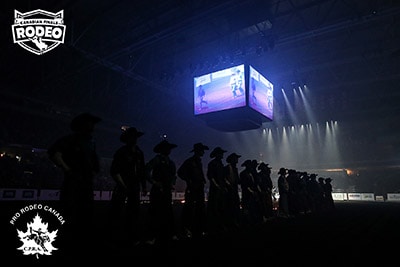 Each fall, fans and members enjoy Pro Rodeo Canada’s premiere event – the Canadian Finals Rodeo. And it takes a host of folks – some in the arena – and others working in the background to bring the event to the public.

Announcers: Making his ninth appearance behind the microphone for the CFR is 11 time Canadian Announcer of the Year, Brett Gardiner. Joining Brett for the second consecutive year is veteran Saskatchewan-based announcer, Doug Young.

Pickup Men: Back for a third time is Calgary Stampede Ranch Manager, Tyler Kraft. Joining Kraft will be former Canadian Bull Riding Champion, Tyler Thomson. Thomson picked up alongside Kraft at the 2021 Finals.

Bullfighters: Returning for his 11thCFR is veteran bull fighter Brett Monea who will be joined by Ty Prescott, (making his fifth appearance). Rounding out the trio, and continuing a family bullfighting dynasty, is CFR bullfighter, Tanner Byrne.

Kynan Vine is back, once again, in the role of Production Manager while Tanner Girletz will handle Arena Director responsibilities once again. Duane Kesler returns as CFR Livestock Superintendent.

Event producer and professional stunt-woman, Niki Flundra, is producing the CFR opening ceremonies; Feature Productions will head up Video Production and FOH Pro is on board for sound and lighting. Sam Winslow is returning as the scoreboard specialist while Shaun Morton is the Music Director. Chantelle Bowman (Wildwood Imagery) has been selected as the CFR Photographer. This year’s CFR Veterinarian is Dr Greg Evans from Moore Equine.

With many other individuals filling in behind the scenes, we look forward to another exciting Canadian Finals Rodeo.

The Canadian Professional Rodeo Association( CPRA) with headquarters in Airdrie, Alberta is the official sanctioning body for Professional Rodeo in Canada. The CPRA approves 55 events annually with a total payout exceeding $5.7 million. The organization oversees the SMS Equipment Pro Tour Finals each fall in Armstrong, BC, holds their premiere event – the Canadian Finals Rodeo (CFR) – at Westerner Park in Red Deer, AB in early November and endorses the Maple Leaf Circuit Finals as part of Canadian Western Agribition in Regina, SK. Follow the CPRA on Twitter and Instagram @prorodeocanada, ‘Like’ Canadian Professional Rodeo Association on Facebook or online at RodeoCanada.com.