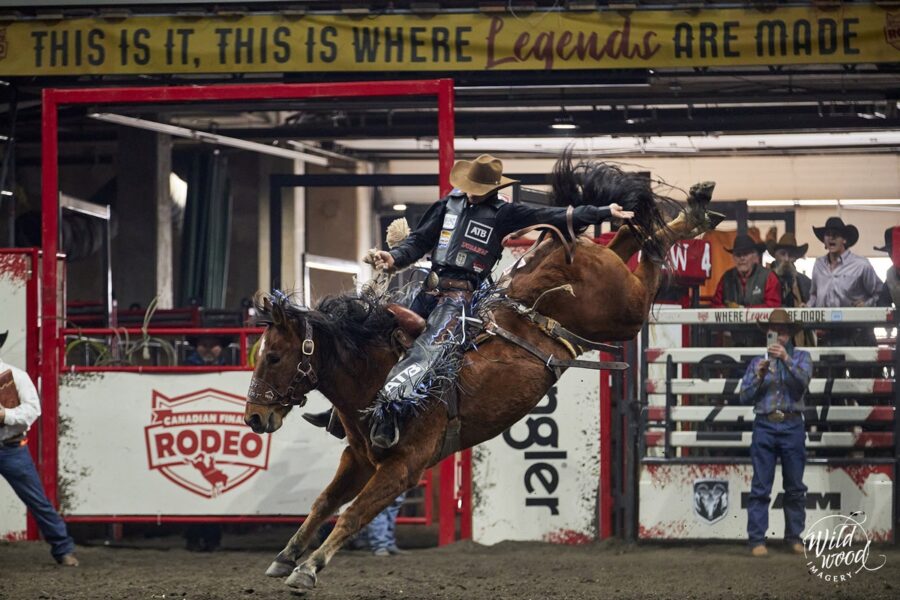 For the second time in less than 48 hours a new CFR record was established in the saddle bronc riding. But this time, the record setting performance took the rider, Zeke Thurston, to his third Canadian Championship. It was fitting that the Big Valley, Alberta cowboy matched up with an old friend to establish the new mark. That old friend was OLS Tubs Get Smart who was making his final appearance in Canada prior to his well-earned retirement following the Wrangler National Finals Rodeo next month. The 93.25 score bettered the previous mark of 91.75 set Friday night by both Thurston and Kole Ashbacher (on Get Smart).

“That was pretty special for me,” the twenty-eight year-old superstar stated. “That little horse has pretty well made my career. I don’t know how much money I’ve made on him but it’s a lot. I was getting half emotional when I was saddling him. He’s been amazing forever.”

Thurston, who came into the Finals in fifth place, amassed just shy of $50,000 for a total of $80,000 for the year. The two-time World Champion was almost unstoppable in Red Deer with three go-round wins, a second, a fourth and the aggregate win as well over six performances.

The second-generation bronc rider acknowledged the importance of family in his pursuit of the rodeo dream. “I don’t actually remember wanting to be a rodeo cowboy, I just always was one,” Thurston smiled. “I watch my little boy; he’s a year and a half old, and all he wants to do is buck and ride things and I was probably the same way. I have a great family supporting me and that’s been really important.”

Another three-time Champion was crowned at this CFR as Provost, Alberta’s Scott Guenthner earned his third steer wrestling title in five years. Guenthner, who was named Cowboy of the Year earlier in the week, placed in four rounds and was second in the aggregate to earn $24,000 at the CFR to add to his regular season earnings of $50,000. The aggregate winner was two-time Canadian Champion Tanner Milan who finished third overall – right behind Stephen Culling.

“I saw the draw last night about midnight and I’m not gonna lie; I got pretty nervous,” Taypotat admitted. “That horse got me the last time I got on her.” The Nanton, Alberta cowboy (originally from Saskatchewan) enjoyed a consistent week with two firsts, two seconds and a third, along with the $14,000 aggregate win to total $50,000 in CFR earnings and $89,757 for the year.

It came down to the final performance in the ladies barrel racing and it was five time CFR qualifier Taylor Manning who claimed the title. The 18-year-old, from Edson, Alberta, maintained the composure and consistency she demonstrated all week on the final day, with another solid run – made even more amazing by the fact that her horse, Bringin The Bling is only five years old.

“This morning I rode and worked on a few things with Bling but when I ran, I just tried to keep the barrels up,” Manning said. “I’m really proud of my horse,” she added, “She’s only five and I was able to run her all five days.”

Manning placed in five of six rounds (with a first go round and aggregate title win) to pocket over $40,000 at the Finals. Canadian and World Rookie of the Year, and Canadian Season Leader Bayleigh Choate – who came into CFR $18,000 ahead of Manning – finished in second spot.

It was the brother combination of Dawson and Dillon Graham who prevailed in the team roping event for their first Canadian Championship. The Wainwright, Alberta cowboys had twice previously been season leaders – only to come up short at the CFR. This time around they started the week with two second place efforts and a round-win before cooling off. They were, nevertheless, able to hold off the hard-charging veteran duo of Clint Buhler and Brett McCarroll who finished $8,000 back.

The closest race of this CFR was in the bull riding where Maple Creek, Saskatchewan cowboy, Jared Parsonage, prevailed for his second consecutive Canadian title. It was anything but easy for Parsonage as Camrose, AB bull rider and rookie CFR competitor, Coy Robbins, mounted a valiant challenge for the crown by riding five of six bulls and winning the aggregate. Parsonage earned over $22,000 at the Finals for a year-end total of $81,900. The margin of victory was a slender $1300.

The only non-Canadian winner at this year’s CFR was San Angelo, Texas tie-down roper, Ty Harris. Competing at his second Finals, Harris overcame a no-time in the second round, putting together a first, a second, two thirds and a fourth en route to the victory. Harris collected $33,000 in Red Deer for $60,500 total earnings – a $9,000 advantage over runner-up, Kyle Lucas. The 2021 Champion, Riley Warren, was this year’s Aggregate winner.

Ladies breakaway roping, in only its second year as part of the Canadian Finals, saw twelve women competing, with Wardlow, Alberta’s Kendal Pierson, emerging as the winner for the second time. A former National High School Champion, Pierson had to come from behind after relinquishing her season lead in the first of three rounds. She fought back with a pair of 2.0 second runs, and when Longview, AB cowgirl, Bradi Whiteside missed her final calf, the deal was sealed for the eighteen-year-old Pierson.

The Canadian Professional Rodeo Association(CPRA) with headquarters in Airdrie, Alberta is the official sanctioning body for Professional Rodeo in Canada. The CPRA approves 55 events annually with a total payout exceeding $5.7 million. The organization oversees the SMS Equipment Pro Tour Finals each fall in Armstrong, BC, holds their premiere event – the Canadian Finals Rodeo (CFR) – at Westerner Park in Red Deer, AB November 2-6 and endorses the Maple Leaf Circuit Finals as part of Canadian Western Agribition in Regina, SK. Follow the CPRA on Twitter and Instagram @prorodeocanadaofficial, ‘Like’Canadian Professional Rodeo Association on Facebook or online at RodeoCanada.com.