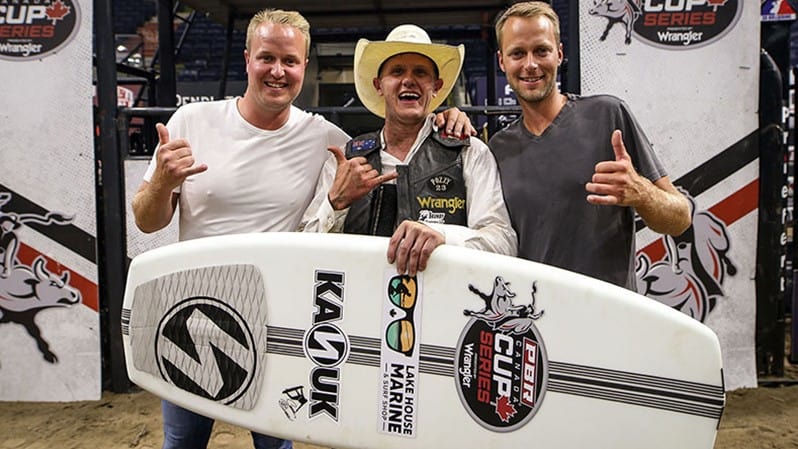 KELOWNA, B.C. – As the elite PBR (Professional Bull Riders Canada) Canada Cup Series, presented by Wrangler, returned to Kelowna, British Columbia, and Prospera Place for the first time in four years Wednesday evening, there was no rider more dominant than Brock Radford (De Winton, Alberta). As the lone rider to go a perfect 2-for-2, the surging Albertan won the PBR Okanagan Challenge, presented by T-Rex Excavating, overtaking the No. 1 rank in the feverish 2022 PBR Canada Championship battle and catapulting 12.67 points out front of new No. 2 Blake Smith (Abbey, Saskatchewan).

Radford, who won the first-ever PBR Canada event in Kelowna in 2017, traveled to British Columbia this season amidst a hot streak, registering three consecutive Top 10 finishes in his most recent outings.

Continuing his momentum, Radford first struck in Round 1 when he delivered the second-best score, marked 85.5 points atop Trapped (Vold Rodeo/Prescott).

With the second pick in the Round 2 bull draft, Radford used his early selection to architect a matchup with Irish Rebel (Wilson Rodeo), a decision that would pay dividends.

As the penultimate man to leave the chutes, Radford was poised as he climbed aboard the powerful animal athlete.

The 27-year-old remained centered as the chute gate burst open, matching the bull jump-for-jump en route to the requisite 8.

With the crowd erupting in cheer, Radford was awarded an event-best 88.5 points to clinch the victory.

Radford’s golden finish garnered him a crucial 77 national points. After beginning the tour stop No. 4 in Canada, Radford surged to the No. 1 position, now 12.67 points ahead of No. 2 Smith.

Smith also competed in Kelowna, however, was shut out.

Fresh off his victory at the 2022 Calgary Stampede, Dakota Buttar (Eatonia, Saskatchewan) was second in Kelowna, netting 52 national points.

While Buttar was bested in Round 1, dispatched by Hat Trick (Vold Rodeo/Wyatt Bridge) in 6.5 seconds, the reserved contender was quick to rebound in Round 2.

Buttar’s silver finish allowed him to crack the Top 5 in the national standings. Now No. 5 in Canada, Buttar is within a mere 62.5 points of No. 1 Radford.

The charismatic veteran was unmatched in Round 1, delivering the top score when he rode Afraid To Nod (Outlaw Buckers Rodeo Corp.) for 86.5 points.

Lambert, however, was unable to remain perfect in Kelowna, tossed by Hard Not To Get (Vold Rodeo) in 4.43 seconds during the final out of the PBR Okanagan Challenge, presented by T-Rex Excavating.

Attempting to tie Aaron Roy (Yellow Grass, Saskatchewan) for most national titles won by one rider in Canadian history in 2022, Lambert is now ranked No. 13 in the title race, 113.5 points outside of the top spot.

On the spurs of a 5.47-second buckoff dealt to him by Lil’ Hooch (Flying High Rodeo Co.) in Round 1, Shannon regained his title-contending form in Round 2, riding Last Rights (Vold Rodeo/Prescott) for 85.5 points.

Shannon’s finish propelled him to No. 14 in the PBR Canada national standings. He is now within 119 points of No. 1 Radford.

Rounding out the Top 5 in fifth was Cauy Schmidt (Coronation, Alberta, Canada).

The young gun’s performance, which earned him 19 national points, was headlined by an 83.5-point ride on Wutang (Vold Rodeo) in Round 1.

In the bull pen, five animal athletes tied for the coveted YETI “Built for the Wild” Bull of the Event honor after posting matching 43.5-point scores.

The 2022 PBR Canada Sup Series, presented by Wrangler, will next travel to Lethbridge, Alberta, and ENMAX Centre on Friday, September 23, and Saturday, September 24. Action for the PBR South Country Co-op Showdown, presented by VisitLethbridge.com, will get underway nightly at 7:00 p.m. MDT.