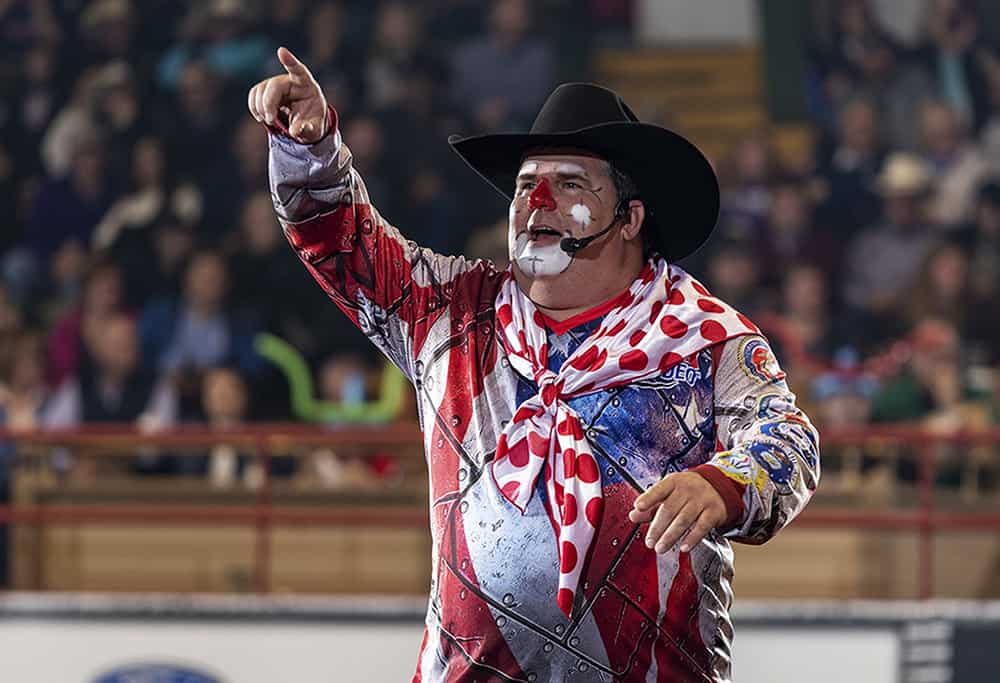 Cody Sosebee will work the Prairie Circuit Finals Rodeo for the first time in 15 years when he entertains the crowds from Oct. 13-15 at the Stephens County Arena in Duncan, Oklahoma.
(PHOTO BY TODD BREWER)

It’s been 15 years since that happened, and much has changed in the world of rodeo and in Sosebee’s world. Still, there are some things that remain the same as he returns to Oklahoma for the Chisholm Trail Ram Prairie Circuit Finals Rodeo, set for 7:30 p.m. Thursday, Oct. 13-Saturday, Oct. 15, at the Stephens County Arena in Duncan.

Since his last circuit finale, the Charleston, Arkansas, man was selected to be the barrelman at the Wrangler National Finals Rodeo, an honor that was voted on by the bull riders who compete there. That was five seasons ago, and in 2018, Sosebee was named the PRCA’s Clown of the Year.

Those honors reveal how much people in the PRCA appreciate the work Sosebee has done over his well-established career. Each year, he’s nominated to be the association’s top clown and barrelman.

“I didn’t expect either one of those honors,” he said. “I was an old guy in my career choice. Just walking down the hallway at the NFR and bumping into those bull riders, it made me feel good because they thought of me to help protect them at the biggest rodeo they’re ever going to be part of.

“When I run into a top-end NFR bull rider and know he took time to vote for me, that’s something I’ll have with me the rest of my life. The money’s been spent, but getting acknowledged for your craft really humbles me.”

He takes none of his honors lightly, but that’s also part of the Sosebee schtick. Being a bigger person, he utilizes that into his comedic acts. He dances as if he were in his 20s and not in his 50s. He plays on his strengths and his wit, which has served him quite well.

“Jokes are the unfortunate situations of other people, but you can’t hardly tell some jokes anymore for fear of upsetting some people,” Sosebee said. “I’ve changed my jokes in my acts to being about me; everything’s about me. I laugh at myself. I’m a big, chubby, dancing guy. I look funny when I walk. I sound funny when I talk.

“It’s OK to laugh at yourself.”

But being funny has made him a legend, and he’s excited to show off his entertainment value when he arrives in Duncan next month.

“My biggest challenge is I want to know what I’m doing is still effective,” Sosebee said.
“When it’s not, that’s when I’ll start slowing down and still do it at a professional level. I don’t ever want to go in with an amateur attitude. People are paying their hard-earned money to see us, and they deserve a pro level.”