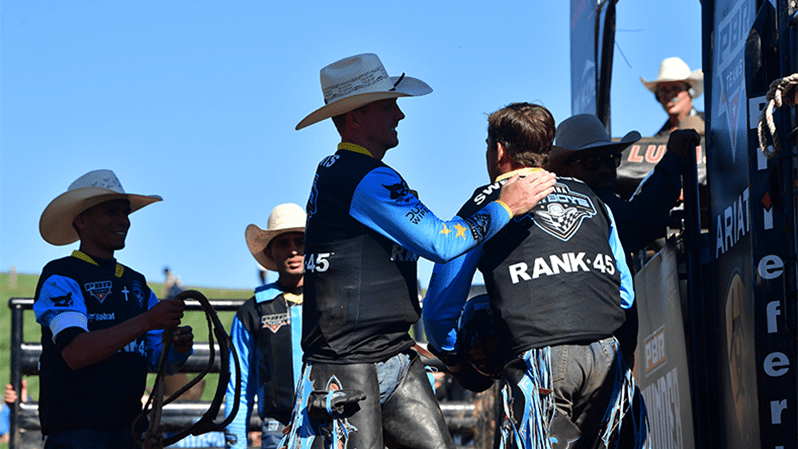 RIDGEDALE, Mo. – On the last day of competition of the PBR (Professional Bull Riders) Team Series Thunder Days, the Carolina Cowboys bounced back after going 0-for-5 on Saturday night to put up three rides and crush the Austin Gamblers 261–89.5.

The Gamblers were without No. 1 draft pick Jose Vitor Leme (Ribas Do Rio Pardo, Brazil), who aggravated sore ribs after being slammed to the dirt on Saturday night following his game-winning ride.

To open the game on Sunday, Ezekiel Mitchell (Rockdale, Texas) in the lead-off position was no match for Gold Chain (Young Cattle Co.), bucked off at 3.71 seconds.

The first out for the Cowboys was Cooper Davis (Jasper, Texas), who hung on valiantly for the final two jumps aboard Falcon Eddie (Lari Crane/Gene Owen) to register an 88.75-point ride.

With the Cowboys on the board first, Griffin Smeltzer (Claresholm, Alberta, Canada) started off strong in trying to respond for the Gamblers, but was ultimately no match for Midnight Flyer (Jane Clark/Gene Owen).