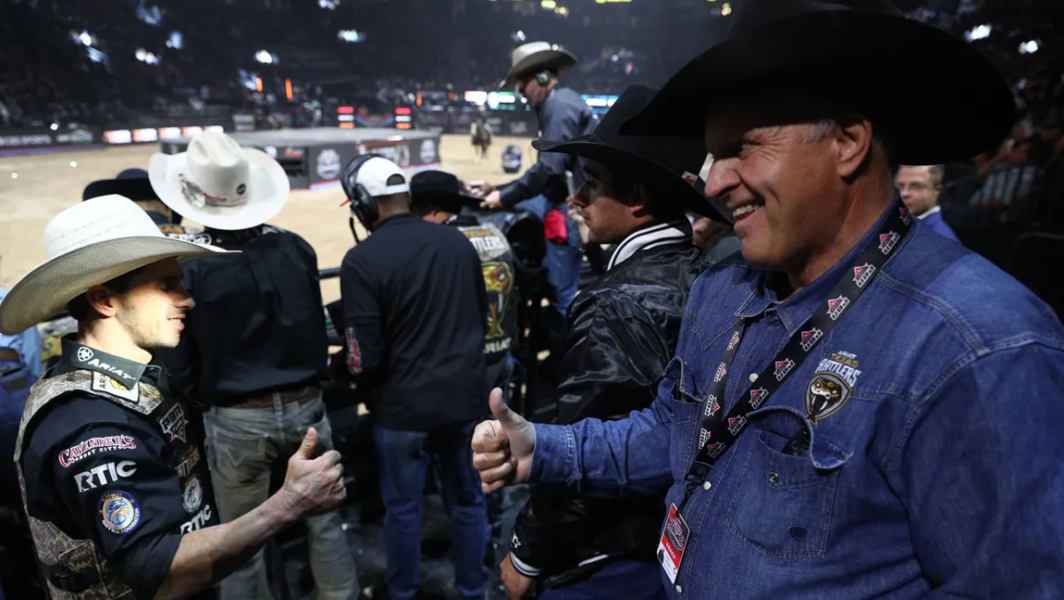 LAS VEGAS – Following their losses in Saturday’s Round 2 games for the inaugural PBR (Professional Bull Riders) Team Series Championship, the No. 1 Austin Gamblers, No. 2 Texas Rattlers and No. 4 Carolina Cowboys squared off in the Last Chance Game that would determine the final team advancing to the Semifinals of the progressive-elimination tournament. Compliments of two ride scores, including a monstrous 90-point ride in the first frame, the Rattlers emerged the supreme team, winning the three-way game 179-90-89.25 against the Cowboys and Gamblers, respectively.

Due to their losses, the Gamblers and Cowboys were eliminated from the Championship tournament. When the high-pressure game got underway, the Gamblers earned an early re-ride when Dalton Kasel (Muleshoe, Texas) was unable to get out of the chutes aboard Domino (D&H Cattle Co./Buck Cattle Co.). As the second team out in the first, the Rattlers jumped to an early lead when Daniel Keeping (Gorman, Texas) delivered what is now the high-marked ride of the PBR Team Series Championship. Matching Flapjack (Parker/OK Corralis/Gordon/D&H Cattle) jump-for-jump, Keeping reached the requisite 8 for a mammoth 93.5 points.

As the last team out in the first, the Carolina Cowboys were unable to strike as Wingson Henrique da Silva (Navirai, Brazil) was upended by Cool Whip (Julian/Staci Addison/D&H/Crooked W) in 5.04 seconds. The second then got underway with back-to-back outs for the Gamblers, with Kasel attempting his re-ride following Ramon de Lima’s (Rio Branco, Brazil) out. While Lima bucked off Razzmatazz (M Rafter E/High View Cattle), Kasel put points on the board for the Gamblers when he outlasted Hurts So Good (David Wolfe) for 89.25 points. As the second continued, the scoreboard went unchanged as Rafael Jose de Brito (Potirendaba, Brazil) bucked off for the Rattlers and Mason Taylor (Maypearl, Texas) was unsuccessful for Carolina.

Following a scoreless third, the Last Chance Game intensified in the fourth. Riding first, Austin’s Ezekiel Mitchell (Rockdale, Texas) was dispatched by Miller Time (A&E Bucking Bulls/BS Cattle Co.), unable to erase Texas’s 4.25-point lead. The Rattlers, however, added to their lead in the middle of the fourth as Braidy Randolph (Jonestown, Pennsylvania) covered Casper (Crescent City Bucking Bulls/Lari Crane/Gene Owen) for 85.5 points. The ride, however, was not without some drama. Following the out, the call was challenged by Carolina Head Coach Jerome Davis. After review, the call stood, leaving Carolina without a challenge for the remainder of the game, but Texas had the option of a re-ride.

In a business decision, Rattlers Head Coach Cody Lambert elected to keep the score. Pulling two bulls ahead of a then-scoreless Carolina, reigning PBR World Champion Daylon Swearingen (Piffard, New York) was in a must-ride position. Erupting from the chutes, Hostage (Hale/Wood) fouled himself, keeping Carolina in the hunt for a Semifinal berth. In the top of the fifth, the Austin Gamblers’ Lucas Divino (Nova Crixas, Brazil) needed to convert or his team would be eliminated. Divino was unable to rise to the occasion, bucked off by Cherry Bomb (Flinn/D&H Cattle Co.) in 3.77 seconds. As a result, Austin was eliminated from the PBR Team Series Championship.

Following the out, Carolina had back-to-back trips, with closer Boudreaux Campbell (Crockett, Texas) up first against Twisted Feather (Blake Sharp/Michael Floyd/Cain Kobert), followed by Swearingen’s re-ride attempt atop Big Heart (Leffew Bucking Bulls). In a must-ride situation, Campbell delivered a heroic out for the Cowboys, conquering his draw for a crucial 90 points. Via the score, Carolina pulled within 89 points of the lead. Eager to continue the team’s momentum, Swearingen was quick to leave the chutes on Big Heart. However, a late direction change upended the New York native in 6.59 seconds, ultimately eliminating Carolina from the tournament. With a Semifinals berth clinched, the Rattlers closed the game with Cody Jesus (Window Rock, Arizona) atop Oz (TNT Bucking Bulls). While Jesus was sent airborne at the 6.01-second mark, his team’s fate was already sealed, with the No. 2 Texas Rattlers earning the final Semifinal spot on Sunday, November 6, when they will play the No. 5 Arizona Ridge Riders.